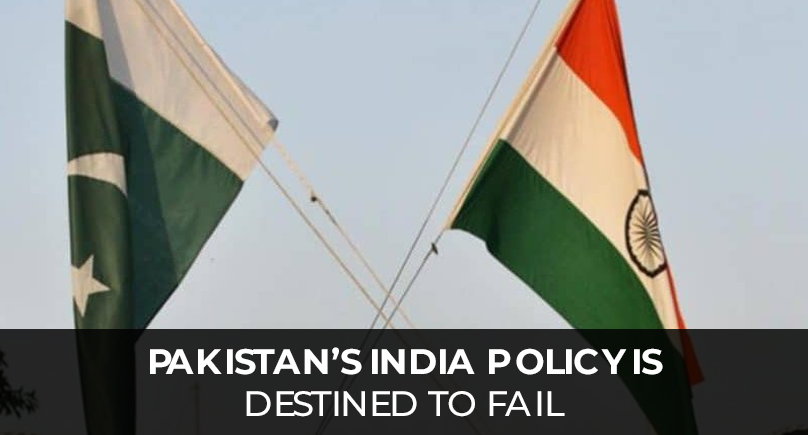 Many people across all socio-political, economic and military circles will argue ad nauseum that Pakistan’s policy vis a vi its neighbor to the East has failed. This has been a constant refrain echoed through power circles for the last seventy plus years. Yet if you dig in deeper as to the reasons for this failure you’ll get a litany of explanations, that straddle Indian hegemonic designs to Pakistan’s own intransigence.

Where over the years Pakistan has adopted a reactive policy mode to its neighbor, swaying between passive belligerism (first Kashmir uprising) and misplaced fawning (Amn-Ke-Aasha), India has on the other hand been consistent through-out its application of foreign policy goals, since independence in 1947.

Indian policy makers to their credit have consistently applied their policy goals in spite of the varying bi-national geo-political conditions between India and Pakistan (Congress or BJP). They have clearly understood since partition that for the Indian experiment to survive the Pakistani experiment must fail. They have realized that they are in a death embrace with Pakistan, and at the end of this embrace only one national entity will survive.

The reasons for such a binary view point is that India has always expressed itself within the prism of a multi-cultural, secular and constitutional state (Modi might be changing that). That the promise of India is longer lasting to the Islamic underpinnings of a more homogenized Pakistan. That the failure of Pakistan is testimony to the need to mitigate its own internal fractions; that the path adopted by Pakistan is fraught with danger and must be avoided at all costs. Hence India’s natural fractures that abound such as its caste system, its wealth disparity, its north and south cultural segregation, its Assam exclusion, its Kashmir challenge, its Sikh desire for greater autonomy and finally its Muslim problem, all can be calmed under the boogey of a failing experiment to the West. Indian policy establishment, the power brokers, must therefore cast Pakistan as a dangerous failure in both the imaginative and real terms.

Again to India’s credit, Pakistan’s treatment of its minorities along-with the national tragedy in East Pakistan (spurred on by India), was aptly leveraged in driving a narrative. With a large bully pulpit, India has managed to effectively amplify Pakistan’s short-comings in areas of social justice and development, while diminish or obfuscate its own litany of grievous failures. Where Pakistan is perceived as a fundamentally failed or failing experiment due to its foundational construct, India’s failures are easily dismissed as the growing pangs of an untidy democratic process.

Pakistani policy makers, and domestic audiences must understand this equation and adjust accordingly.

The only way to bring stability to Pakistan is to have a strong counter offensive to India on all fronts (social, economic, political and military). Fawning over any notion of talks or charm offensives is pointless and against Pakistan’s interests. Our energies must be applied towards building stronger internal institutions, enhancing our education around international standards, developing and reinforcing a national narrative (that is inclusive of all rungs of society), investing and supporting in our intelligence infrastructure, and waking up from the naivete that belies our policy towards India.