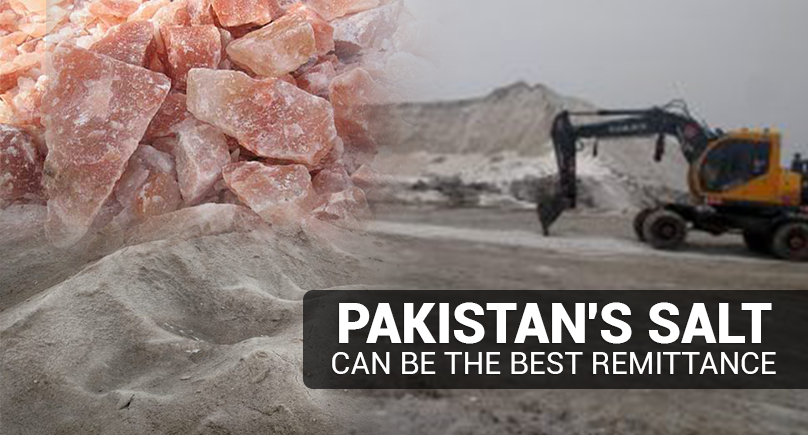 Pakistani food is incomplete without salt. Pakistani salt is very popular all over the world because of its distinctive taste. However, the use of salt is not limited to food, but salt is also used in an estimated one hundred and twenty-six industries, including textile, leather, chemical industries, etc. are notable. However, this salt is not edible salt, but it is a mineral salt that is consumed by industry.

The situation of salt deposits in Pakistan

Did you know that Pakistan has the highest salt reserves in the world? There are more than 172 salt lakes in Pakistan.

Pakistan has an estimated salt reserves of more than six billion tons, while the fact that the salt found in Pakistan is 99% pure, known as Himalayan Salt. Salt is loved all over the world because of its unique taste. Pink rock salts are only available in Pakistan.

Where there is no fear of theft and robbery, no pollution of the environment, no sense of strangeness. This is the Thar Desert, where the true colors of culture and tradition have not faded. The name Thar comes from Thal which means salt and here the locals also call their land Lavan (salt) sea.

The Hub Salt Refinery factory is located at Mokhai in this salty desert.

The Hub Salt Refinery has leased 1,200 acres of Mokhai Salt Lake from the Sindh government in 2011 for its factory. Hub Salt also has its own power plant for this salt refinery. The 75-kilometer road from Mithi to Mokhai Namak Lake is also part of the project. While it is commendable that the people of Thar are getting decent jobs due to this salt refinery, there is also a madrassa and mosque for children.

How is Salt Made?

When Tariq Mahmood Satti, the manager of the salt factory, was asked about the process of making salt from the Salt Lake, he said that the lake is a natural salt reservoir, while the salt is high after the monsoon rains is obtained in quantity.

The depth of the lake is four to five feet and when it starts to dry up, salt is extracted from here and the salt is collected in one place with the help of cranes and tractor trolleys. This salt is then processed and cleaned, and brought into usable form. He further told Rava News that this salt is widely used in the dyeing factory and other industries, whereas this salt cannot be used in food. It is used for industrial purposes.

Tariq Satti also said that this Salt Lake supplies tons of salt per month to different cities of Pakistan. On the other hand, the salt produced in Hub Salt was exported to other countries including Europe, USA, Canada, Japan and China. While Pakistan famous Engro Company also buys salt from Hub Salt for its industrial use.

To understand the importance of Pakistan’s salt, we contacted Ismail Sattar, former President of Lasbela Chamber of Commerce and Industry, President of Employees Federation of Pakistan (EFP) and Chief Executive Officer of Hub-Pak Salt Refinery. He informed us about the expansion plan that Hub-Pak Salt Refinery would be setting the ‘World’s Single Largest Salt Manufacturing Site’ with an estimated cost of a whopping $300 million on 150,000 acres of land in Balochis tan. He hoped that the plant would be operational till the mid of the fiscal year 2023.

According to him, they are eyeing to achieve the target to produce approximately 24 million tons annually, adding that with this dream achievement Pakistan would stand as the world’s third largest producer of salt and the second largest exporter of the commodity if all 24 million tons are exported. Mr Sattar informed us that the annual export target is $1 billion. He also said that the mega-investment would give financial strength to economically deprived residents of Balochis tan.

About Hub-Salt, he said that he has been engaged in this particular business since 1984, adding that Hub plant, Ankerio Plant Tharparker, Mukhai Plant Tharparker and Kalabagh salt mines Punjab are already operational.

The total annual production of Hub-Salt plant is around 3,00,000 tons, while Ankerio and Mukhai produce 300,000 and 2,00,000 tons respectively. He said that the country’s total annual industrial demand of salt is around 4 million tons, and the Hub-Salt is meeting around 19 percent of the market demand.

Hub-Salt is currently being exported to the USA, Australia, Japan, the UAE, Europe and South Korea, he added.

He asked the government to reduce the energy prices for the manufacturing sector. “The Ministry of Commerce (MOC) should sit with us to device a long-term strategy.”

The government of Pakistan needs to take an interest in this sector and pay attention to this industry for foreign exchange.