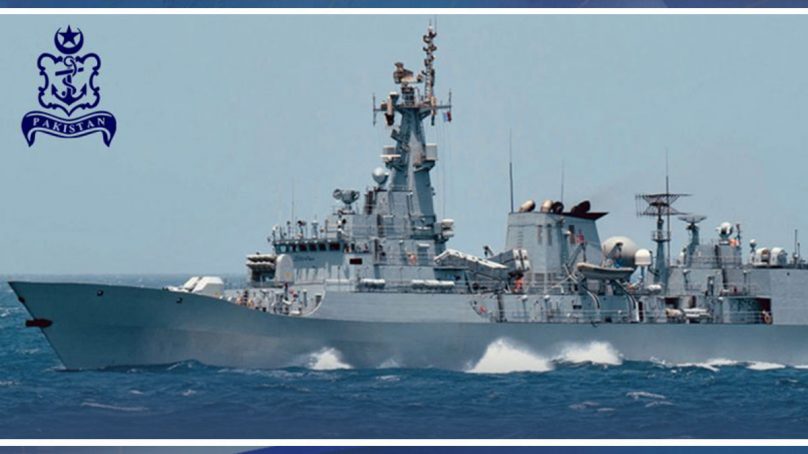 The changing threat dynamics and enhanced maritime security requirements in the Indian Ocean region have altered the course of military modernization. Sea power plays a significant role in creating and modifying the influence of great powers on other states therefore, the states are acquiring naval power which will strengthen their position in the global political and strategic environment and will also assist in establishing their rule on the sea.

The Indian Ocean holds great geo-economic and geostrategic significance due to the presence of many important strategic chokepoints and Sea lines of communication (SLOCs) important for sea bourn trade. The importance of the Indian Ocean has also been stressed upon the US naval strategist Alfred Thayer Mahan who proposed that the Indian Ocean holds great significance and is the key to the seven seas in the twenty-first century, the destiny of the world will be decided in these waters, therefore who will rule it will rule the world.

The ongoing geo-economic and geo-strategic tussle between major powers like the US, China, and India for the dominance and naval supremacy in the Indian ocean, growing economic, strategic, and political relations, growing Indo-US strategic partnership, and joint Indo-US policy to contain China has transformed the strategic environment of Indian Ocean. Along with that traditional and non-tradition security challenges to Sea Lines of Communication (SLOCs) such as maritime terrorism, piracy, drug trafficking, and human smuggling are some of the major challenges that have impacted the maritime security of the Indian Ocean Region (IOR).

Amid all this, Pakistan’s maritime security which is intertwined with the maritime environment in the Indian Ocean region is facing an ominous hybrid mix of traditional and non-traditional maritime security threats and increased the impetus for naval modernization of Pakistan. In the last few years, there has been a significant rise in the types and intensity of maritime threats that Pakistan is facing. The development of China Pakistan Economic Corridor (CPEC) and the intensified hostility of India have led Pakistan to undertake measures to ensure its maritime security including coastal security and freedom of navigation. Therefore, the induction of modern and potent surface platforms like frigates, corvettes, and offshore patrol vessels has assumed greater urgency

Developmental plans and strategies of military and naval forces of any country are always progressive and futuristic and are based on Revolution in Military Affairs (RMA). Historically, the US and UK were considered as the major supplier of modernized weapons and ships like destroyers and frigates to Pakistan. The weapons received from them were technologically advanced and have helped Pakistan to maintain its strategic deterrent posture in the Indian Ocean. They also embedded the essence of professionalism in the Pakistan navy and provided high-tech training to its naval troops. However, with Pakistan’s geopolitical and geostrategic tilt in favor of China and the growing economic, and strategic partnership between both the countries, Pakistan Navy came up with a well-chalked and comprehensive program to transform its naval development especially destroyers and frigates.

As part of its modernization plan, Pakistan Navy is collaborating with China to strengthen its naval forces to deal with any possible and eminent threat in the Indian Ocean Region. Pakistan and China have agreed upon a series of arms procurements. Recently, Pakistan Navy has acquired the first of four agreed-upon Chinese-made Type 054A/P frigates (NATO Codename JIANGKA-II). This will be one of the most technologically advanced platforms of the Pakistan Navy that would substantially add to the offensive capability of the Pakistan Navy.

The development of the first two of four Type-054A/P Frigates was agreed upon in 2017. Subsequently, the other two ships were ordered in 2018. The first frigate was launched in August 2020 and the second ship was launched in January 2021. The first ship will be commissioned in Pakistan Navy in November 2021.

The Tughril Class or Type 054A/P are Pakistan-specific, upgraded variants of the Type 054A FFGs, state-of-the-art major surface combatant warships, the most modern frigates ever developed by China, and are designed for intense anti-air, anti-surface, and anti-submarine operations in the high seas. It will be one of the most technologically advanced f ships of the Pakistan Navy Surface Fleet, equipped with the modern surface, subsurface, and anti-air weapons, long-range missiles, improved radar system, electronic warfare, air, and surface surveillance and acoustic sensors, and other combat management system. The over 4,000 tonnes, 440 feet long warships will be armed with a 32-cell Vertical Launch System (VLS), equipped with the HHQ-16 SAMs and the Yu-8 ASROCs, 2×4 ASCM launchers armed with the CM-302 supersonic anti-ship cruise missiles, anti-Submarine Torpedo launchers, anti-Submarine rocket launchers, decoy rocket launchers, and two Type 1130 CIWS. The Pakistan Navy Type 054Ps might get delivered with advanced Z-9D Maritime ASW/ASuW helicopters.

Besides that other major naval collaboration programs between Pakistan and China include enhancement of long-range anti-submarine warfare, anti-surface warfare capability, induction of long-range maritime patrol jets, medium-altitude long-endurance unmanned combat aerial vehicles, and modernization/ development of existing naval fleet with state-of-the-art weapons and surveillance systems. Pakistan is also seeking to acquire modern helicopters, corvettes, and shallow water attack submarines to further strengthen its naval forces. Pakistan has confirmed that it would buy eight stealth attack diesel-electric Yuan-class type 039A also referred to as type 041 submarines valued at $4 to $5 billion from China. Pakistan has also procured F-22P frigates, fast attack craft (missile), helicopters, and advanced survey ships from China. The Pakistan Navy has also contracted the construction of eight Hangor-class submarines (Four will be constructed in China and four will be built in Pakistan),

Pakistan believes in promoting peace and harmony in the region. It has remained committed to the international community to maintain stability and curb maritime crimes in all forms. Pakistan is proactively contributing to collaborative maritime security initiatives as a partner to international navies besides its sound initiative of Regional Maritime Security Patrol (RMSP) for a secure maritime milieu in the region and beyond. The new platform being inducted will strengthen PN’s deterrence in the region to achieve desired objectives. The induction of these warships would significantly enhance Pakistan’s maritime defense and deterrence capabilities. These ships will boost the potency of our fleet and significantly contribute to maintaining peace and security in the region. The recent evolution of the Pakistan Navy shows how far it has traveled in its quest to be a formidable military component. PNS TUGHRIL will indeed help PN in boosting its efforts, especially in IOR. Pakistan Navy will continue to play its role in contributing to the national government’s efforts for peace and stability in the region.