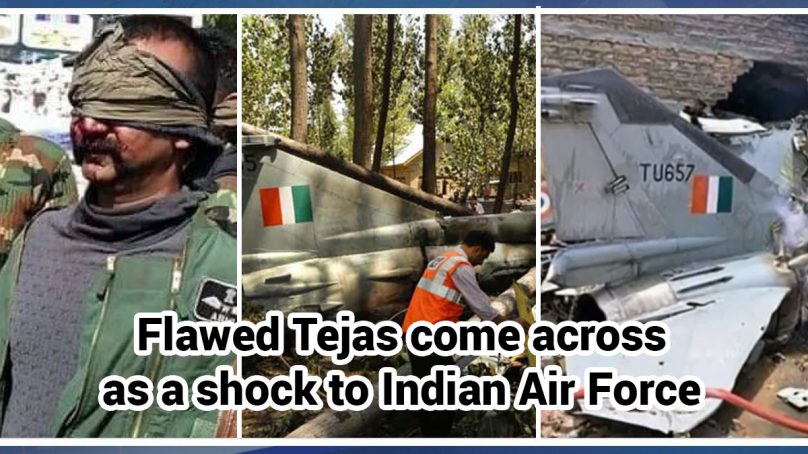 Flawed Tejas come across as a shock to Indian Air Force

Whenever the name of the Indian Air Force conjures up, the first thought that comes to mind is Abhinandan and the crashed plane. In fact, for the Indian military leadership, which claims to be the world’s fourth largest military power, the politically and defensively corrupt, weak and professionally compelled Air Force is a matter of concern.

Defense experts around the world have been sharply critical of the Air Force’s shortcomings. According to a report by the US think tank Carnegie Endowment for International Peace, the IAF’s declining reputation is a flop of development projects, while the rapidly growing productivity of the China and Pakistan Air Force poses a serious threat to the Indian Air Force’s numerical superiority.

However, it seems that the stars of the Indian Air Force are still in circulation. Due to the MiG-21, the Indian Air Force has had to take lightly all over the world, while the skills of Indian pilots have also been questioned. It may be recalled that more than 170 pilots and 40 civilians have been killed in MiG-21 accidents so far. Apart from the rest of the world, India’s own defense experts have also been criticizing the performance of the Air Force. That’s perhaps a factor why they’re doing so poorly. The Indian media also praised the Tejas aircraft. However, the news that is coming now is not good for both the Indian media and the Indian Air Force.

Despite working on several Tejas prototypes for more than 35 years, the basic design of the Tejas aircraft is flawed. Therefore, 60% of Tejas planes had to be grounded.

On the other hand, there is a lot of resentment among the top officials of the Indian Air Force and the reason is that MK1A

The HAL Tejas LCAMK1A is a lightweight, single-engine, multi-role fighter aircraft developed locally by the Defense Research and Development Organization of India before the launch of India’s locally manufactured Tejas. He is suffering from fitness problems, which is probably why the Indian Air Force did not take the risk of deploying a Tejas aircraft in the Balakot strike, while Pakistan’s surprise operation Swift Retort shook the Indian Air Force.

The world once again saw the skill and dexterity and madness of the Pakistani falcons. Mujahideen-e-Aflaq stole the dream of victory of Indian warriors from JF-17 Thunder in such a way that it will take time to pick up the pieces of this dream. Pakistani falcons not only targeted MiG-21 and SU-30. Not only that, but the Indian pilot Abhinandan was also arrested alive.

The Indian Air Force cannot ignore the fact that not using the Tejas on February 27 is a telling proof of its failure.

On the other hand, this historic achievement is a testament to the skill and professionalism of the Pakistani aviation industry.

Currently, according to reports, India’s front-line Tejas fighter jets are being developed to fight Pakistan’s fourth generation JF-17 Thunder fighter jets. But in fact, the aircraft was designed to replace the MiG, one of India’s most important fighter jets, as more than 170 Indian pilots and 40 civilians have been killed in just 21 MiG crashes since 1970. At least 14 MiG-21s have crashed between 2010 and 2013, and more than half of the 840 aircraft built between 1966 and 1984 have crashed.

Tejas Fighter jets with safety issues have failed miserably to replace the dysfunctional MiG-21. The fact that there is no immediate solution to the design, quality and structural shortcomings of indigenous Tejas aircraft is enough to blow the IAF’s sleep, making their intended combat readiness plan an unfulfilled dream.

Little is known about the fact that the Tejas HAL is not the first failed fighter development project. Earlier, the first project to develop locally fighter jets for the Indian Air Force was the HF-24 Marut project, which was started in 1955 to design multi-role aircraft. The project also developed several prototypes. Flipped badly due to design flaws, as well as structural weaknesses.

The world was witness to the event when the Indian Air Force lost two advanced fighter jets. On February 27, 2019, a MiG-21 Bison and a SU-30MKI were lost in a historic air clash with the Pakistan Air Force, while Indian Wing Commander Abhinandan was captured by Pakistan. This historic defeat not only embarrassed the Indian Air Defense personnel but also put their own people on the spot.

The Tejas is facing serious safety issues, and these issues have reached such a level of concern for aircraft manufacturers that at the end of 2012, the Tejas itself was grounded by HL for more than three months.

Indian aviation experts have blamed India’s flawed and corrupt bureaucrats for “Made in India” in the manufacture of Tejas Light Combat Aircraft in India for its lack of combat capabilities and failure to meet international standards. It may be recalled that in May 2015, the Tejas aircraft was publicly criticized by the Comptroller and Auditor General of India (CAG).

Significantly, the Indian government has spent more than Rs 8,000 crore ($ 1.1 billion) on the development and testing of more than one Tejas naval prototype and related systems. Defense Minister Rajnath Singh awarded a 6 6.25 billion contract to Indian company Hindustan Aeronautics Limited, which is now a major headache for the Modi government. Stories of corruption in the Indian Air Force are not hidden from anyone.

On the other hand, Pakistan’s locally designed and manufactured JF-17 fighter jet Block 1, Block 2 and two-seater JF-17 is an efficient and low-cost single-engine fighter, aimed at developing countries in the global market. A great choice

Abhijeet Iyer-Mitra, a senior fellow at the Institute of Peace and Conflict Studies, New Delhi, India, says there are many reasons to prefer the JF-17 over the Tejas. First of all, the Tejas has failed to impress the Indian Air Force with its performance. If a country wants to change its MiG-21 to MiG-27 aircraft, or Chinese F-6 or F-6, or if it wants to replace the 7 type planes or American F-5 planes with new planes or if it wants to get a modern trainer, then JF-17 is the best qualified and priced aircraft for it.

The Tejas, on the other hand, is a completely confused aircraft and does not fit any well-known market segment. The JF-17 is a mid-range aircraft but all the improvements made to it are solid and tested. The Indian expert said that the Tejas is a nightmare, nothing has been tested and proven. It has been over-tested and does not win the trust of any buyer.

He said the JF-17 uses mostly Chinese and some Italian avionics and radar and Russian engines – no problem exporting to third countries. While the engines in the Tejas are made from American, radar, Israeli and avionics from different countries and these are the countries that will not be generous in exporting them from India.

No air force or navy in the world has placed an order for any of the Tejas aircraft; moreover, the Indian Air Force has been reluctant to issue orders.

Indian aviation industry companies such as HAL and other DRDO affiliates showcased stunning designs of two-engine aircraft such as Advanced Medium Combat Aircraft-AMCA Indian Air Force at the Aero India-2021 show. Omni is a role fighter with many indigenous sensors and avionics. Naval MK2 with twin-engine deck-based fighter, glossy cardboard make-up and polymer-made scale models, but the ground reality of HAL’s production capabilities is that these designs are just paper projects.

Therefore, the general view of the Indian Air Force High Command is that 60% of the Tejas fighter jets are inoperable, with repeated system failures, design flaws, bureaucratic delays and corruption in Indian defense production, politically affected IAs. The projected delay in HAL’s procurement and supply of 83 Tejas fighters by 2030 in this blind deal of $6.25billion will be another major catastrophe in terms of operational readiness of the Indian Air Force, which will continue for decades to come. The IAF’s required 42 operational squadrons will be less than required, while the Indian aviation system industry is notorious in the world for substandard production, persistent failures, and its recent performance is a question mark on the quality of Indian aviation, the answer to which is available to Indian military think tanks.