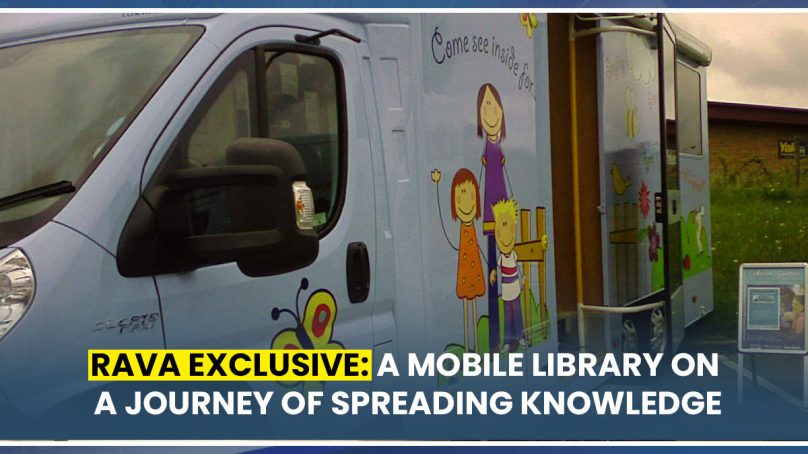 RAVA Exclusive: A Mobile Library on a Journey of Spreading Knowledge

The innocent children hearing exciting stories from colorful, pictorial books is a sight to behold. When children, pressed under the burden of coursebooks, get exposed to the outside world, they cannot help but revel in that delightful moment, which remains etched in their memories forever. To that end, the volunteers and others associated with the Children Literature Festival (CLF) are working hard and selflessly.

Rumana Husain is an activist for children. She has written more than 60 books for children and has received numerous awards for these services. Not only that, but she has more than 30 years of experience in the education sector.

Rumana is also part of the CLF, an organization that is playing its full role in bridging the broken relationship with books and inculcating the love of reading in children and is organizing many opportunities and interesting activities for children where they can be connected with books and children. In addition to the textbooks, there are some good and positive readings.

The CLF’s way of working is such that programs are conducted under it and many people are there to provide all kinds of support.

The Children’s Literature Festival is held at the Karachi Arts Council and is a two-day festival with a conservative estimate of about twenty to twenty-five thousand children. In other cities of the country, the festival is usually held in a large government school. According to a conservative estimate, more than 70 Children’s Literature Festivals have been held in Pakistan in the last ten years.

Rumana Husain says that in this festival children are shown and taught things which are not discussed in the classroom. In CLF, children learn what they do not learn in their schools throughout the year.

In this regard, Rumana Husain said that the facility of mobile library is not for posh areas like Defence and Clifton but for every area. At present this vehicle is running in Korangi in Karachi.

Big names like Nadia Jameel and Umair Rana and Ahsan Khan also tell stories to children here. The children are also shown multimedia presentations and videos in the car. The aim is to encourage children to study as much as possible.

Apart from the book cart, a series has also been started under the name of DG Library under CLF which includes books, maps, art and craft and games in one big trunk. The children also liked it very much. The library was started from Mubarak Village in Karachi and stories were told to the children in the fishing village. There is a similar DG library in Gilgit and Chitral. At the same time, the CLF wants to launch it in Cholistan, Tharparkar, Pakistan’s northern areas, and coastal areas to reach out to children who have been forgotten by all.

Rumana Husain says that we have forgotten the children. There is no separate movie documentary for them. There are no extracurricular activities. Unfortunately, parents do not understand that mobiles or tablets can never be a substitute for books and it is very important for the education and training of children that they be given a field trip. Take them to museums, get them to see and learn something new.

Of course, children are our future. Only if children are trained on the right lines will we have a better society tomorrow. Rava News rightly appreciates the CLF’s initiative and is committed to supporting them in this mission.