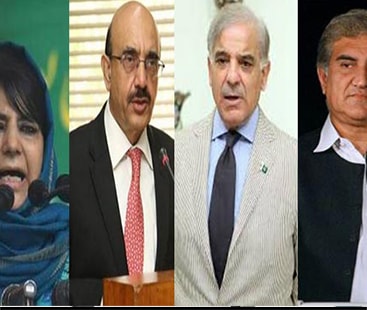 Former Chief Minister of Indian-occupied Kashmir (IoK) Mehbooba Mufti on Monday has described the step to scrap Article 370 of the Constitution as “the darkest day in Indian democracy”.

In a statement, the leader termed ‘one-sided’ decision of Indian government as illegal and unconstitutional. It will bring destructive outcomes across the sub-continent. Indian has completely failed to fulfill its promise in occupied Kashmir, she added.

Meanwhile, Azad Kashmir president Masood Khan said that today, India has ended so-called status of held-Kashmir. The Indian authorities are illegally occupying the valley and martyring the innocent people for 72 years, he continued.

On the other hand, Opposition Leader in National Assembly (NA) Shehbaz Sharif strongly condemned abrogation of Article 370 and said that it’s a clear war against United Nations. Indian forces ‘murdering democracy’ is alarming for international community, he asserted.

The PML-N leader said that entire nation is united as this matter comes under national interest of Pakistan. Time has come for joint decisions of political and military leaderships regarding Kashmir, he went on to say.

Foreign Minister of Pakistan Shah Mehmood Qureshi said that Indian nefarious aims have been exposed and that no amendment can suppress freedom movement of Kashmiris. He said that Kashmir conflict has become more complex now.

Deputy Chairman of Senate Saleem Mandvi Wala said that India’s attempt to turn the occupied Kashmir into a Union Territory by revoking article 370 and 35 A will not succeed. He said that Kashmir was an independent state and Indian constitution cannot be implemented in the valley.