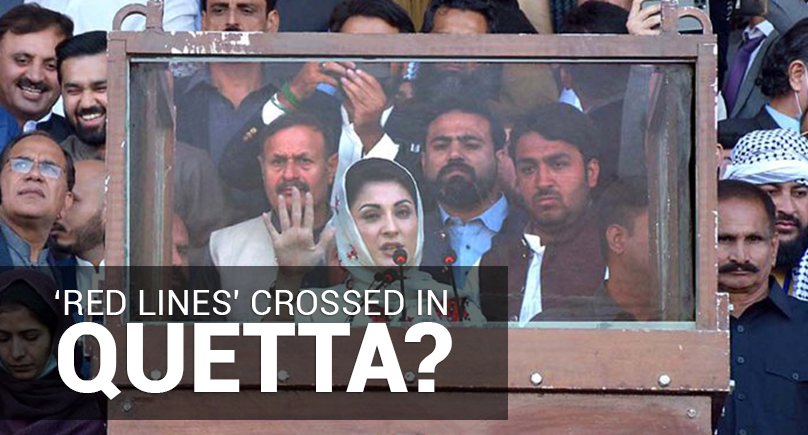 In view of some political commentators, some Pakistan Democratic Movement leaders ventured into forbidden territory.

While at its Gujranwala and Karachi jalsas, the PDM leaders rightly underscored the people’s economic privations and the misery caused by exorbitant prices of essential food items and medicines, in Balochistan’s capital last Sunday the speakers also highlighted the issue of enforced disappearances and missing persons.

PML-N chief Nawaz Sharif, addressing the rally through videoconferencing, said: “I am aware of the Baloch people’s problems, Nawaz Sharif knows that the issue of the missing persons still exists. I feel pain when I see the victims.” Maryam Nawaz, in a startling move, called Adeeba Qambrani, a young Baloch woman whose three brothers have been missing, to the stage, vowing that the husband and brothers would no longer go missing in Balochistan.

Politically speaking, bringing the issue of enforced disappearances under the spotlight in such a no-holds-barred way is a sign of defiance to the military establishment, underlining the opposition coalition’s inclination to cross what were hitherto considered ‘red lines’. There is also no dearth of sceptics who flayed the PDM’s move as disingenuous and opportunistic, saying that people disappeared in Balochistan during the PPP and PML-N governments as well. This viewpoint also deserves merit.

However, it is noteworthy that the problem of missing persons is being raised from the national stage by a segment of the top political leadership. The torment that the families of the disappeared endure every day, not knowing whether their loved ones are alive or dead, was there for the whole country to see. If MNA Mohsin Dawar had been allowed to participate, it would have further accentuated the degree of the problem.

Any country where people can be removed without following due process and security is a democracy in name alone. The Commission of Inquiry on Enforced Disappearances has only partially succeeded in tracing the situations of the cases that have come before it. It has failed stunningly in the other, equally significant, feature of its mandate; that is, “to fix responsibility on individuals or organisations responsible”.

While no part of the country is now immune to this contemptible practice, underscoring the issue in Balochistan is especially apt because enforced disappearances have further exacerbated the sense of estrangement among its people. Despite the massive resources that the province boasts, the majority of Baloch live in poverty, the countless promises made to them of a better future still remain unfulfilled.

It’s time the state woke up from its deep slumber and addressed the burning issues facing the people of Balochistan. Simply spiriting away the people on the pretext of national security won’t do.