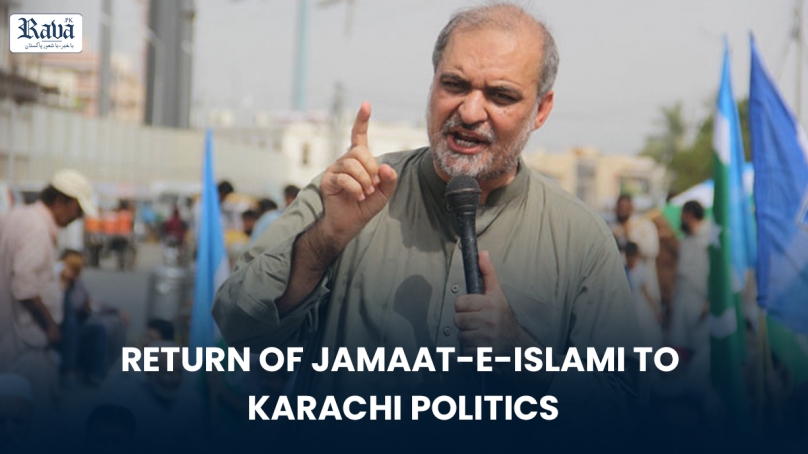 Rava: How do you see the full return of Jamaat-e-Islami in Karachi politics after a long time?

Naeem: First of all, we thank Allah that we have been struggling for a long time and our workers have made great sacrifices. There was a time when it became difficult to do politics and all avenues were closed for political workers. But Jamaat-e-Islami remained present in the field and worked relentlessly for Karachi and its people. Jamaat-e-Islami continued to expand its ideological politics and then came a time when the party had the opportunity to work when Nematullah Khan, who became the mayor of Karachi and played a valuable role in the reconstruction and development of Karachi, changing the map of the city.

Unfortunately, as a result of the policies of the then government, the path of Jamaat-e-Islami was blocked. Then Karachi saw the worst period in its history. Insecurity and killings increased. Times were tough but we did not give up. Jamaat-e-Islami has been on the streets for the last four or five years because the parties with mandate in Karachi have not done anything for the city. Packages are announced, schemes are announced but nothing is happening on the ground; water problem still persists, roads are dilapidated and unmotorable, the city’s infrastructure is creaking, public transport system is still non-existent.

In this whole situation, the people of Karachi find themselves completely helpless, while the fact is that in the last elections, they voted overwhelmingly for the PTI, the MQM and the PPP in the suburbs. They got votes from there but in practice the people of Karachi did not get anything while Jamaat-e-Islami took a very clear and unequivocal stand and we do not consider good relations with any political party as bad. These are political norms but all the things that are based on Karachi’s hostility are based on their incompetence. We raise our voice and we will continue to raise it and that is why people started responding to it in small cantonment elections. Has made it clear that Jamaat-e-Islami has received tremendous support this time as compared to the ruling parties and we have won five seats both in terms of votes and in terms of seats. In many places, our comeback will move forward and Jamaat-e-Islami will emerge as the most effective force in the coming local body elections.

MQM out of Karachi elections

It seemed that the MQM would be out of the Karachi elections because as a political worker I was well aware of the situation. The time came when the people were not together but they maintained their power. Then as a result of differences among themselves and as a result of coercion from the party, the gulf between the MQM and the people began to widen. Now the MQM has no leadership for the people of Karachi, which is why they have been able to get any votes in any election of the last few years.

Karachi’s mainstream population is the Urdu speaking community, which is full of a sense of deprivation. They relied on the PTI as an alternative to the MQM but the former did with Karachi what the PML-N did what the PPP did. The PTI did not come up with any new plan for the megapolis. One wonders where and when the package announced for Karachi will be implemented; the speech remains the same, but the numbers change.

Khan Sahib did nothing for Karachi. Karachi belongs to everyone but no one belongs to Karachi. Karachi is the linguistic unit of Pakistan. We used to work. You could have complained about something, but we have delivered honestly. Karachi’s prestige was high. Karachi’s politics was important in the whole country. The bounce-back of Jamaat-e-Islami is a sign that Karachi is returning to its roots.

The PPP does not want to hold local body elections in Sindh, in Punjab nor in KPK so that people are deprived. Our entire focus is on getting back the right of city government. Local body elections should be held. We also have issues that need to be resolved. 2023 will come but there will be no census. They only issue statements to delay. The election of the National Assembly was held on the census which was not even notified by the Supreme Court.

And we are confident that Jamaat-e-Islami will emerge as a major force throughout the country.

In every era, the rulers want to take over. In every era, laws like this keep coming, so this government also wants to control the media completely. Stay away from such politics. Sanctions will not solve the problem. You have to look at yourself. The media also has to decide. What are your priorities? What are the dramas that are being made? Do they really depict our culture? Are they really showing the image of Pakistan?

Pindi’s weather will be kind to Karachi

Our God should be kind to us and we should have contact with the people. We will work. God Almighty will create the conditions.

The whole world saw the victory of the Afghan Taliban, how they defeated the world’s greatest power. This living reality acknowledged itself.

We are not fighting here, we are struggling, we are doing the work of invitation, we are explaining to the people, we are knocking on the minds, we will keep giving.