Rights or a march: What exactly is a Pakistani woman’s problem? - Rava.pk
Recent View all
News
Read more

Home  »  Editors Choice   »   Rights or a march: What exactly is a Pakistani woman’s problem? 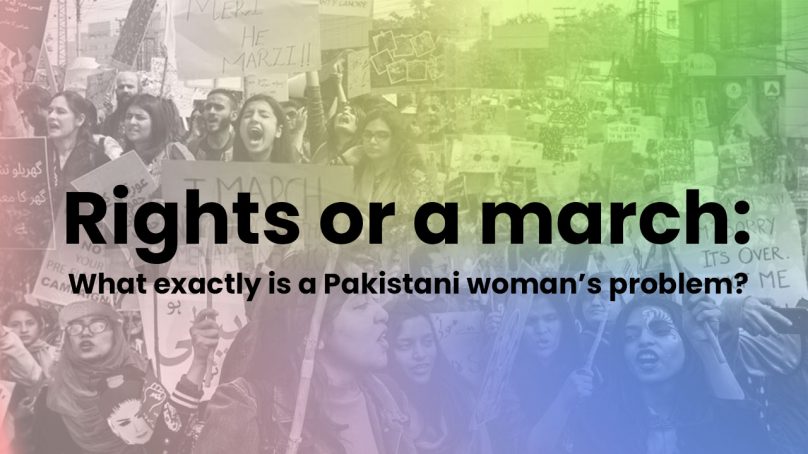 As the month of March approaches, there is a sudden uproar from all quarters about women’s rights, leading many to think whether the movement encompasses all perceived rights of a woman or is it confined to just one month or one protest.

Does any woman’s rights start and end with her body’s will? Shouldn’t she have the freedom to live the teaching of consciousness? After all, it defies logic that every year in Pakistan a deluge of women comes out in March who are mostly from the posh areas. Regrettably, to increase their numerical strength, these elite women also include the underprivileged, helpless women as showpieces who have absolutely no awareness of the entire campaign.

With all due respect, these well-heeled women, clad in branded costumes and brandishing obscene, strangely-worded posters and placards, have named their march the AuratMarch, which is an affront to the chastity and honor of a woman.

It is a fact that a woman in Pakistan may not be getting her rights like this, her basic needs are not being met and she does not have the basic rights of her life, but in the same society, women of the same country in every field are moving forward.

Anyone who is aware of all this would be willing to believe that there should be work for women in Pakistan, but should it be for her health, for her future, or for her protection, or something that happened in the past? What is being done in the name of this women’s march for years is a debate. Does this march really talk about women’s rights?

This is the fourth year of the Aurat March. In these four years, the so-called march has emerged as a new ray of hope for the rights of women in Pakistan. It would not be wrong to say that the Aurat March has now become the biggest event of the year. Yes, you read that right. You have one of the biggest events in which everyone will find fashion except the main issue: branded attire, obscenity, vulgarity, but the real issue remains unaddressed.

The debate that used to set off after the Aurat March now starts before the march and this is the biggest question mark for those who organize, or participate, in this event.

The first step towards solving problems is to identify and discuss these problems, but other than such shameful slogans as “warm your body”, “heat your own food”, find your own socks”, etc., one barely gets to see anything substantive, nor do the elite hear the sorrow of the oppressed woman, her sighs, or a never-ending raft of her problems.

What has come to light so far about the Aurat March is nothing but empty words, mere rhetoric. No demands have ever been made about the fundamental rights of a typical Pakistani engulfed by a slew of problems, including grinding poverty, illiteracy, o0r sexual harassment.

None of what has come down to us through those placards and slogans is really a problem. For example, who will heat the food, who will find the socks, it is not a social issue.

The main problems of women are education, poverty, ignorance, forced marriage, honor killings, violence and harassment. These are issues that have nothing to do with these slogans or this march. The attitude and behavior adopted at the moment to publicize or address these issues is fundamentally wrong. The solution to social problems can never be found by going to extremes, adopting an aggressive approach and standing up to each other, and the class that has started this campaign may not even be aware of these problems. The issues mentioned above are more important than warming up the food and not wearing a scarf.

There is no denying that it is wrong to speak up for one’s rights. Everyone has the right to freedom of expression, but it is not fair to use any issue to one’s advantage.

My question to these women campaigners is to give me an answer to my innocent question. Are they getting the rights that God and religion have given to women? Whether it is domestic matters, hereditary or voluntary marriage or decision making regarding their children, are these rights given to women in our society? Aren’t these important issues that should be debated? We will spend more and more years debating whether to warm our food, why should I wear a dupatta, why should I look for socks?

There is no denying that a man can shed someone’s blood in the name of honor for his mother, sister, daughter or wife, but why is someone else’s mother, daughter and wife not honorable? It is true that in this day and age, a woman walks everywhere with the footsteps of tolerance. Were there any issues written in the placards caught during the Aurat March campaign that felt like they needed to be changed?

There is no objection to the Aurat March or raising the voice of our own rights, but we need to consider our priorities first. Unfortunately, we are preparing to give our next generation in a world that we do not understand. In the times to come, neither man nor father will be honored, neither the elder nor the younger, because then everyone will be flying the flag of their own rights and even then we will say that the times are very bad.

There is only one question. Please start by respecting a woman. Start by considering her as a human being. Start by removing the obstacles of her forced marriages and education. Woman is a metaphor for love. No one has stopped anyone from holding an Aurat March, but the organizers of the march would do well to come down from heaven and meet the people on earth.