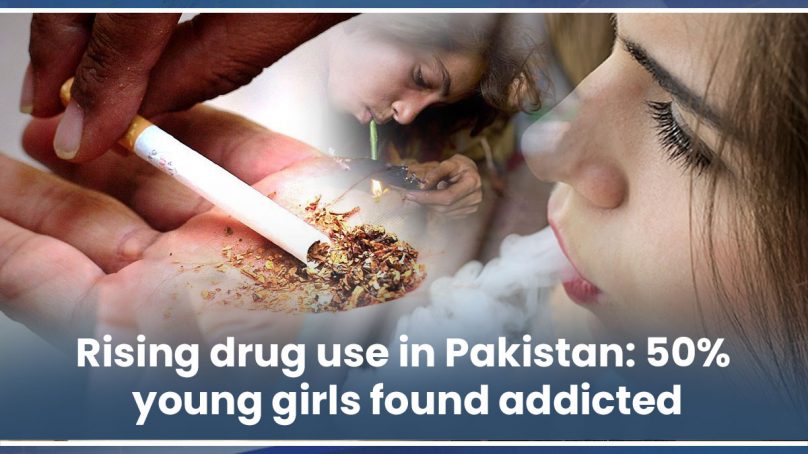 According to a survey report by the United Nations Office on Drugs and Crime (UNODC), some 350 million people between the ages of 15 and 64 worldwide are affected by the devastating effects of drugs. And in Pakistan, 700 people die every day due to drug use, as per the report.

While 9 million people are addicted to drugs and only less than 30,000 people have access to treatment, 9.37% of those seeking recovery do not have access to free treatment. Boys and girls between the ages of 13 and 25 are the most affected by drugs, and even more frightening is the fact that 50% of them are young girls.

55% of people in Punjab and 45% in other provinces are addicted to drugs and this number is increasing by 500,000 people annually. According to another UNODC report The Global Afghan Opium Trade 2011 out of 350 to 400 tons of Afghan opium, 132 tons of opium was used in Pakistan.

Drug use is a major problem in Pakistan which is affecting all sections of the society. 800,000 citizens of Pakistan use heroin regularly. The annual amount of heroin used in Pakistan is estimated to be more than 40 tons.

The estimated amount of money laundered from the drug trade in Pakistan each year is valued at $2 billion. Medical experts and psychiatrists say that the trend of drug use in the new generation is in fact the extreme abundance of wealth or extreme poverty, bad company of friends, infidelity of the opposite sex, failure in one’s goals, anxiety and frustration of circumstances. Parents’ indifference on the part of children, social inequality, injustice, and parental domestic disputes can also lead to the onset of addiction.

Alarmingly, among the drug addicts, the rate of HIV is the highest among the fatal diseases, which is 13% worldwide, while the rate is 42% in Karachi, Pakistan.

While Afghan insurgents were busy fighting Russia, where the Kalashnikov culture came to Pakistan, the scourge of heroin, along with other drug paraphernalia, spread across the country.

This is a very dangerous situation that we do not take seriously. In our society, the police and law enforcement agencies have a very important role to play in eradicating crime. The scourge of drugs cannot be eradicated without the cooperation of the people; people keep seeing drugs being sold in front of their homes, in the streets and eventually their children get caught up in this scourge but they are reluctant to help the law enforcement agencies in this regard.

Former Sindh Chief Minister Ghous Ali Shah admits that Sohrab Goth operation was against drug mafia. The operation would have been successful if an SHO of the area had not revealed the secret. He said that bribes were received daily, adding that his government had tried its best to save the young generation from the curse of drugs.

Similarly, a notorious base along with Frontier Colony, Pathan Colony, Malang Hotel has caused a great deal of public outrage and the locals have also put up protest banners against the drug den. In fact, if the drug mafia is strong, it is because of the weakness of the people.

Responsible officers are available to root out crime in police institutions. Good and bad people are everywhere and no institution is free from such people.  As long as we, as individuals in the society, do not cooperate with the law enforcement agencies, our areas will continue to become crime havens.

We need to realize our responsibilities so that they can play an important role in protecting our future generations, for drugs are a scourge and public support is essential to eradicate it. The role of law enforcement in the sale of drugs is also very disappointing. A report of the Special Branch Police revealed that the officers and personnel involved in corruption and crimes of Sindh Police are being identified. A report compiled by the force revealed that some police officers patronize criminals and drug dealers.

Drug traffickers are inexplicably building their markets while Karachi is becoming a hub for drugs. The United Nations has warned that if urgent steps are not taken to curb drug trafficking, Pakistan will soon become a major drug user like Russia.

Director General of the Anti-Narcotics Force Major General Ghulam Shabir Narejo said that out of the 184 metric tons of narcotics seized by the ANF this year, 1800 metric tons of drugs worth $1.3 billion were burned.

The Anti-Narcotics Force is working against drugs in four ways. The policy also introduces a policy in educational institutions that if a student is found to be involved in drug use or intoxication, they will be disqualified and expelled from the educational institution. It was also suggested that they be tested. Parents should also be made aware of the need to keep a close eye on their children as taking sedatives due to fatigue and lack of sleep gradually leads them to become addicted to drugs. The special attention of the parents towards the children can save them and can play an important role in making the next generation strong and useful for the nation.