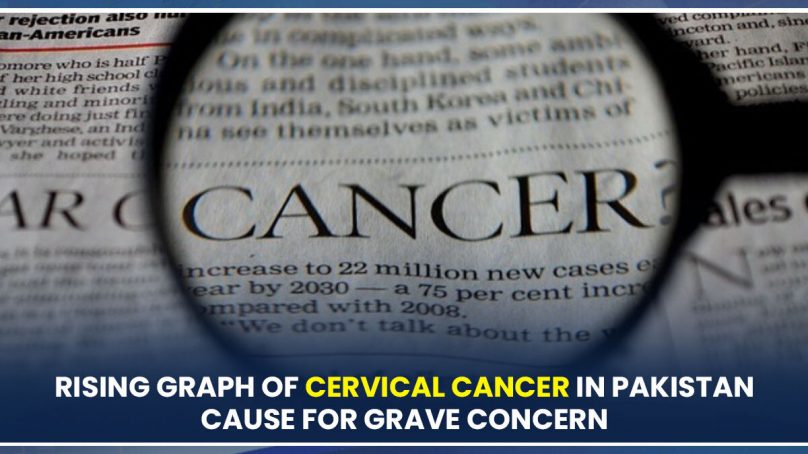 Alarmingly, the rising number of cancer diagnosis among Pakistani women has received little attention. There is no central data or cancer registry for the number of cancer patients at the national level in Pakistan. Breast cancer is the most common among Pakistani women, according to medical professionals, but the incidence and prevalence of cervical cancer is also on the rise, which is cause for serious concern.

According to the latest research, 28,000 women lost their lives due to cervical cancer in 2022.

Cervical cancer has become the third most common cancer in Pakistan, followed by head and neck and breast cancer. Nearly 64% of Pakistani women who develop this cancer die as they hesitate to discuss it due to shame, fear or ignorance, making the disease almost incurable by the time it reaches its terminal stage.

What is cervical cancer?

According to medical experts, cervical cancer is a cancer of the reproductive organ in women, in which abnormal growth of cells starts in the cervix. Usually, cervical cancer takes ten to twenty years to spread in the body.

The cancer shows no clear symptoms in its early stages, which is why women remain unaware of the existence of this disease, and by the time they do, it is too late.

Talking about women’s reproductive health is considered taboo in the Pakistani society. Therefore, many women do not tell their family about their health condition, especially in the case of cervical cancer, they go to the doctor when their disease has advanced.

The major symptom of cervical cancer is vaginal bleeding after the disease has progressed, which is different from the menstrual period. According to medical experts, precious lives can be saved if people are aware of the symptoms of the cancer.

Renowned gynecologist Dr. Tahira Kazmi said that the credit of Pap smear goes to a Greek doctor Georgios Papanikolaou who discovered the method of identifying cancer with the help of cells, hence its name.

Dr. Tahira explained that the cervix is used for this particular exam. Every woman over the age of 30 should have this test done because cervical cancer has the highest incidence rate after breast cancer and is often undetected. This test identifies abnormal cervix cells before the cancer develops, necessitating the use of preventative measures.

What if the test report is worrying?

From the age of thirty to 65, Pap smears are performed every three years. So, what should be done if the test report is not positive? In this regard, Dr. Tahira Kazmi said that in the next step, the cervix is ​​viewed with the help of a machine called a microscope (colposcope) and a biopsy of the affected part is taken. Throughout the process, the patient does not need any anesthesia and the biopsy is not very painful. A normal painkiller will do if the pain persists.

The tendency of the cells of the cervix to develop into cancer is called CIN or carcinoma in situ. If the cervical cancer is in the first stage, then the first line of action entails cutting out the mouth of the uterus, or a part of the cervix. Cone biopsy and LLETZ are the two recommended methods for this purpose. The procedure is carried out vaginally, and the woman is given anesthetic. However, the patient should frequently get a pap test to make sure that any residual cells are not posing a threat.

According to Dr. Sahiba, the human papilloma virus targets both men and women’s sexual organs rather than the throat or lungs like the coronavirus does.

The virus is mostly found in sex workers and is transmitted from there to different people. HPV cannot be transmitted in any other way.

Warts are treated with laser or electricity where the warts are burned away. These traps are not removed by burning once, so this process needs to be repeated many times.

If women get this infection during pregnancy, there is a risk of transmitting the infection to the newborn as a result of natural childbirth.

Women who are exposed to certain types of viruses, HPV 16 and HPV 18, run the greatest risk of developing cervical cancer. 70% of cancer patients are caused by HPV.

According to research, vaccination benefits women of all ages. When combined with routine screening, vaccination can cut cervical cancer risk by 94% compared to doing nothing.

This vaccine is administered to girls at the age of eleven to twelve years to prevent cervical cancer. The reason for vaccinating girls at an early age is simply because vaccinating in adolescence is more effective and protects against transmission of infection via any means throughout life.

There was a lot of resistance against this vaccine saying that as Muslims, where are our children exposed to this kind of sex? Or it is something that gives more joy to children and girls.

There was a lot of opposition to this vaccine, with many Muslims arguing their kids were barely involved in such a licentious act. They asserted that even a debate on such a vaccine would pique young children’s interest in such illicit activities, which should be discouraged in a Muslim culture.

If their line of argument is correct, then why is it that more and more people in Pakistan are being inflicted with this fatal disease?

According to experts, the HPV virus is the primary cause of this disease; therefore, vaccination against this virus can prevent the cancer. The use of safe sex, such as condoms, can also prevent the transmission of this virus.

Why is cervical cancer prevalent in the country?

Unfortunately, we lack a cancer preventive program, a reliable screening system, and a registry or database of cancer patients, etc.

In addition, illiteracy, poverty, and a lack of access to primary healthcare facilities all contribute to the spread of this malignancy.

With caution and knowledge, however, cervical cancer can be prevented.