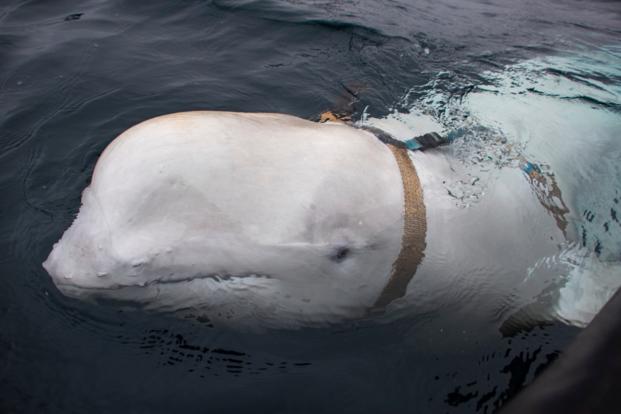 Does Russia have a spy squad made up of trained whales and dolphins? That they suspect in Norway.

And recently they found a Beluga with a very special special harness near its shores.

Marine biologist Audun Rikardsen said the harness had a camera stand, as well as a label that placed it in St. Petersburg.

Rikardsen clarified that a fellow Russian scientist told him that it is not the kind of devices that Russian academics often use.

And Russia has a naval base in the region.

Image caption The Russian Navy has a naval base in the Arctic region.

The allegedly trained beluga repeatedly approached some Norwegian boats that were in Ingoya, an arctic island located 415 kilometers from Murmansk, where the fleet of northern Russia is established. The belugas are native to the waters of the Arctic.

The Norwegian public broadcaster NRK showed a video where the beluga is being released from the harness.

Professor Rikardsen told the BBC that the harness “was tied really tight around his head, in front of his pectoral fins and had some pins.” He also said he had a GoPro bra, but not the camera.

“A Russian colleague told me that they do not do this kind of experiments, but she knows that the Navy has been hunting belugas for years and trains them, most likely related to that,” Rikardsen said.

Animals for military use

A Russian colonel, who has previously written about the military use of marine mammals, shrugged off Norway’s concern for the beluga. But he did not deny that he could have escaped from Russian M arina.

Interviewed by the Russian radio station Govorit Moskva, Colonel Viktor Baranets said: “If we were using animals for espionage, do you really think we would put a label with a cell phone number written with the message ‘please call this number?'”.

“We have military dolphins that play roles in combat, we have not hidden that,” said the colonel.

“In Sevastopol (Crimea), we have a center for military dolphins, we train them to solve various tasks, from analyzing the seabed to protecting an area in the sea, in addition to killing foreign divers and attaching mines to the hulls of foreign ships. “

The center for dolphins in the Crimea used to be under Ukrainian control, but was occupied by the Russian Navy in 2014, when Russian forces took the peninsula.

Professor Rikardsen, who teaches at the University of Tromso, said that “the belugas, like dolphins and killer whales are quite intelligent : they are Arctic animals and quite social, they can be trained like a dog”.

During the Cold War, the US Navy established a special program to train dolphins and sea lions in California.

The Marine Mammal Program of the US Navy, based in San Diego, uses bottlenose dolphins and California sea lions to locate mines and other dangerous objects on the ocean floor.

The Navy website also says that the animals are used to detect unauthorized people under water that could harm US vessels.