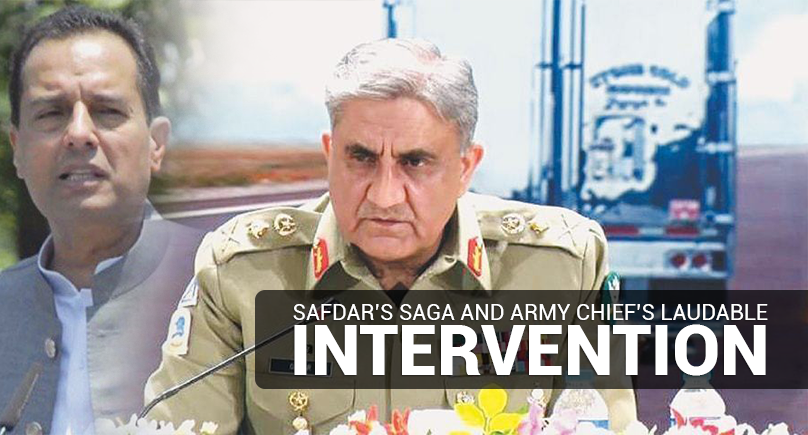 ALTHOUGH the circumstances that led to retired Capt Mohammed Safdar’s arrest must be completely probed and the findings made public, one fact that is as clear as day is this: the rule of law in this country is under absolute threat.

It all began early Monday, merely after the PDM’s successful jalsa in Karachi, when the police apprehended Capt Safdar from the hotel where he and his wife Maryam Nawaz were staying, after purportedly breaking open the door to the couple’s room. Mr Safdar was arrested on the heels of an FIR registered against him and 200 of the PML-N’s supporters for changing slogans at the Quaid-e-Azam’s mausoleum, thus desecrating the sanctity of the sacred place, and damaging property, among other charges.

In a shocking revelation, Mohammed Zubair, Ms Nawaz’s spokesman and PML-N leader, later said that the Sindh IG had been abducted by the Rangers and taken him to a sector commander’s office where he was forced to issue arrest orders; the additional AIG was also brought there. Some PDM leaders at a later news conference backed this account, accusing certain state elements of trying to create fissures within the opposition union.

The unfortunate event has undoubtedly been a huge humiliation to the Sindh government. Bilawal Bhutto-Zardari condemned the arrest as a “sad and shameful act” and some PPP leaders such as Saeed Ghani tweeted that the provincial government had no involvement in it. In a press conference yesterday, the Sindh chief minister made the matter even more vague and confusing. While correctly describing Capt Safdar’s actions at the Quaid’s mausoleum as “inappropriate”, the CM said the police acted “in accordance with the law”, and said nothing about the Sindh IG’s uncalled for abduction.

However, the air was later cleared by none other than Mr Bhutto Zardari himself in a press conference, who precisely came up with what transpired on Monday morning. Mr Bhutto confirmed that thuggish tactics that are the trademark of tyrannical governments were indeed resorted to.

Following the saga, a number of senior policemen in Sindh applied for leave on the grounds that the police hierarchy had been mocked and the entire force left disenchanted, demoralized, shocked.   Although the officers later deferred their leave, Sindh’s major law-enforcement agencies are in an unpleasant confrontation, with things moving in a disturbing direction.

Thankfully, Army Chief Gen Qamar Javed Bajwa has taken notice of the “Karachi incident” and ordered an immediate investigation into it, according to the Inter-Services Public Relations (ISPR).

The army chief has directed the Karachi Corps Commander to “immediately inquire into the circumstances to determine the facts and report back as soon as possible”, according to the statement issued by the ISPR.

One hopes that the army chief’s much-needed and timely intervention will help placate an otherwise charged environment and will go a long way towards avoiding an ugly face-off between the country’s security agencies. Let’s see if a stitch in time will save nine!