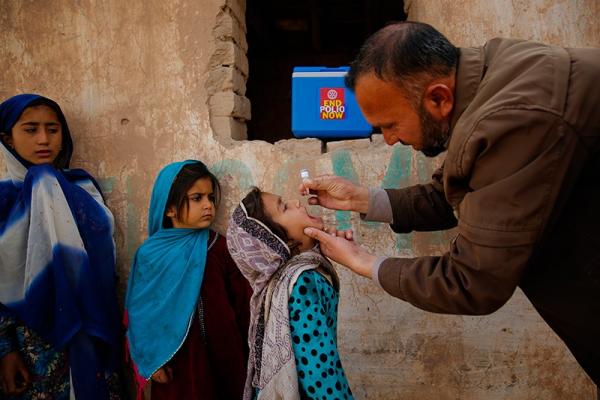 THAT Pakistan is one of the two countries, including Afghanistan, that has failed to stamp out the debilitating disease of polio from its soil is a terrible indictment of the country’s health situation.

To make matters worse, attacks on polio teams are a norm, and are carried out with impunity at various places in Pakistan, in which hundreds of volunteers, health workers and police personnel guarding them have lost their lives. As recently as August 1, 2021, a policeman was martyred in an attack on a polio team in Peshawar, Khyber Pakhtunkhwa.

Why is poliomyelitis so dangerous?

Poliomyelitis (polio) is an epidemic (rapidly spreading) disease caused by the poliovirus. There are three types of polio virus that enter the human body through the mouth, get to the intestines and increase their number; then, through the blood, they reach the nerve cells (neurons) that control the muscles and cause their destruction. In this way, the muscles that are controlled by these nerves become useless; in other words, this part becomes paralyzed.

In most cases it affects the nerves of the legs and the patient becomes unable to walk. Usually, one side of the leg is affected. From the intestines, the virus is excreted in the body through feces and spreads rapidly to other people if you do not wash your hands after being relieved or due to poor drainage. Early symptoms include high fever, muscle aches, headache, lethargy and neck tension.

In most cases, the body’s immune system eliminates it at the same stage, and in 0.5% of cases, the stroke occurs.

The disease can occur at any age, although the rate is highest in children under 3 years of age.

It is important to note that polio can only be prevented with immunizations. The polio vaccine is needed to protect children against polio. By feeding multiple times, it protects the baby for life.

In a world where polio is extinct, the crippling disease still exists in only two countries in the world: Pakistan and Afghanistan.

However, it is welcome that in 2021, only one case has been reported in Pakistan so far. The case was reported from Balochistan in January.

The most polio-sensitive areas in Pakistan

The following are the most polio-sensitive areas in Pakistan:

Has polio been completely eradicated in Sindh?

Fortunately, for the first time in three years, no poliovirus was found in the environmental samples of Sindh, while no case of the virus has been reported in the province for a year. The last case in Sindh was reported on July 14, 2020.

Environmental sampling of polio in Sindh

There are 17 places across Sindh for environmental sampling of poliovirus from which sampling is done. Of these, 11 are in Karachi and 6 in the interior Sindh. The good news is that the poliovirus has not been found in any of these samples.

The Emergency Polio Center has set up Integrated Service Delivery by the Government of Sindh and under this, EPI Centers, Mother Child Center Nutrition Center, Birth Registration, and in some places Water Plants have been opened in the backward areas for the convenience of the people and children. Do not hesitate to administer your children the vaccination.

According to the Emergency Operations Center for Polio, Sindh, the situation is now very promising. Parents are mentally prepared to vaccinate their children against polio. According to him, we have also engaged influencers with polio workers to make the polio campaign a success while we are happy that not only the community of doctors but also the religious community is supporting it. The campaign could not be launched due to Covid-19 last year, but the response from parents has been great since the campaign began, while since August 2020, there has been a 50pc reduction in polio vaccination and missing children.

In 2020, more than 82 cases were reported from across the country.

In 2021, only one case (from Balochistan) has been reported in Pakistan so far this year.

What are the challenges facing polio workers?

“During the polio campaign, we stay in the field from 8am to 3am,” Shazia, a female health worker, told Rava. She said she goes from house to house knocking and telling their children to get polio drops. She added that she has been in the field for four years. Regarding the way people behave, she said that in the area where I am part of the polio campaign, there is a very poor population who find it difficult to make ends meet. She urged parents to get their children polio drops by hook or by crook.

Shazia continued: “This journey is not so easy. People still do not open the door. Most of the men forbid us and even abuse us. But we don’t mind because that’s our job. We have to vaccinate children. When men go from home to work, we go and secretly get polio drops. It is also a fact that people are becoming aware that it is necessary to get their children vaccinated against polio and people are starting to trust them.”

Saima, a female health worker, said that the area I have is a posh one, so people here are aware and vaccinate their own children. She said the situation is not the same as it was in the beginning. ‘Now people are listening to us and are becoming very careful and conscious about their children,’ she added.

Waheed Khan, Communication Officer, UC 13 Safoora Karachi, said: “our seven-day campaign has five working days. There are two catch-up days. On catch-up days, we turn to homes that have not vaccinated their children for five days for some reason. We have social mobilizers for this, we have supervisors, they talk to them, while we have union council medical officers, they talk too.”

The country’s target population for the polio campaign

The country’s target population for the polio campaign is 40 million children under the age of five, while the number in Sindh is 9 million, of which 2.3 million are in Karachi.

It should be noted that the campaign could not be launched last year due to the coronavirus.

Pakistan still needs three years to become a polio-free country without any polio cases or samples being reported from across the country. It is the responsibility of all of us to make the intermittent polio campaign a success.

So, knock on the closed doors and give your children polio drops without any fear. This knock is the hope of our bright tomorrow.