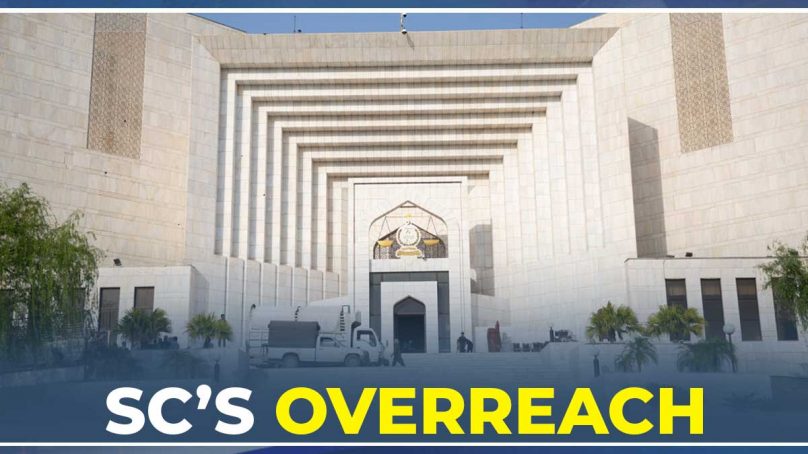 The Supreme Court, it appears, is under immense pressure from the relentless tirades of former prime minister Imran Khan at many public rallies. But it should be careful not to buckle under any populist pressure and avoid indulging in acts that are far beyond its mandate or the pale of the law.

On the advice of a fellow judge, the chief justice has gone into overdrive, taking suo motu notice of a perceived interference by powerful government individuals in many existing criminal cases, as well as media allegations of changes to accountability laws.

The court suspects that such meddling in the legal system may jeopardize constitutional requirements of a fair trial and due process, as well as “eroding public faith in the rule of law and constitutionalism in the country.”

The suo motu seems to have been prompted by the Federal Investigation Agency’s continued failure to indict Prime Minister Shehbaz Sharif and Punjab Chief Minister Hamza Shehbaz in a multibillion-rupee corruption case. Initial proceedings on the suo motu on Thursday saw a bar placed on any transfer and posting of officials involved in “high-profile” NAB and FIA cases, as well as notices being sent to federal and provincial authorities to report on the cases they are prosecuting.

The court was also concerned by the removal of the names of “thousands” of people from no-fly lists. Chief Justice Umar Ata Bandial justified the suo motu as a measure to “protect the criminal justice system and the rule of law” during the hearing.

The chief justice’s justification for the suo motu appears to reflect the senior judiciary’s wish to reinforce its non-partisanship in areas of public interest. It appears that the court is within its jurisdiction to defend the legal system against unconstitutional interference or influence.

Nevertheless, the Supreme Court ought not to defend NAB or the existing accountability laws. The court itself had chastised NAB in the Paragon City case in 2020 for its manifestly illegal, unjust, and politically motivated objective. If the legislature is acting fairly, it should be allowed to correct such flaws.

The Supreme Court’s recent short order in the Article 63A issue has already drawn a lot of criticism, as it is viewed as the judiciary’s attempt to ‘rewrite’ the Constitution. It would be wise for the judiciary to concern itself with resolving thousands of pending cases and desist from any controversial move that further erodes its flagging reputation.