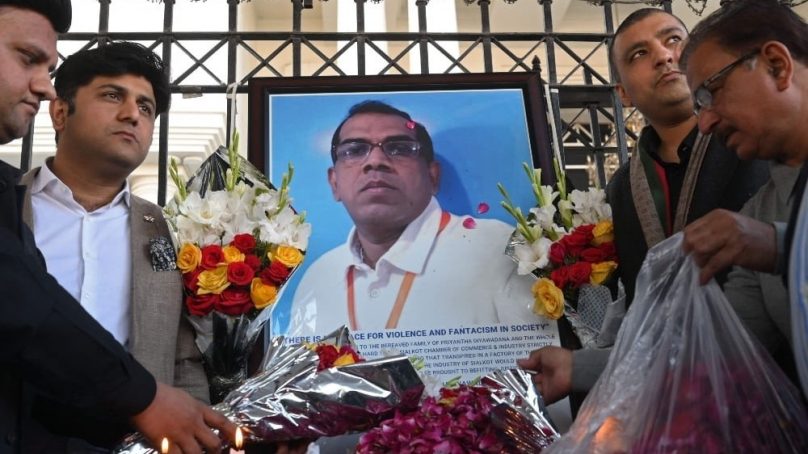 THE nation is once again in a state of shock and disbelief. Once again, we have been reminded of the level we Pakistani Muslims have stooped to. And with each passing day, our image as a sick, inhuman, and savage nation is becoming stronger, bringing utter shame and ignominy not only from within the country but also from the world community.

What we saw on Friday evening was a horror show one wouldn’t even get to see in films. The ghastly, frighteningly inhuman manner in which Priyantha Kumara Diyawadana, a Sri Lankan national, was hacked to death over blasphemy allegations at the factory in Sialkot where he worked as a manager is inexplicably horrendous. And that was not it! The bigoted mob then dragged his mutilated body out on the road and set it on fire, with individuals at the site filming and taking selfies of the burning body—in a stark display of horror where humanity and human values were thrown out of the window.

What transpired following the gruesome murder was entirely predictable: denunciations from all quarters and electronic and social media awash of outpouring of sympathy, grief and anger over the incident. The government—true to form—vowed to penalize the culprits, with the army chief also resolving to bring to book the perpetrators ostensibly because Mr Diyawadana was a foreign national.

But the key question is: Were the law-enforcement personnel asleep at the switch when this heinous crime was occurring in broad daylight? Were they not capable or responsible for rounding up the criminals who were perpetrating this vigilantism in front of their own eyes?

Needless to say, the incident has made us bow our heads in shame. While we have unleashed our bloodlust many a time on our own, this time the fanatics amongst us went a step ahead: they vented their brutal frustration on an individual who was a guest in our country.

Nevertheless, the official condemnations are just the tip of the iceberg. The harsh fact is, we got to see Mr Diyawadana being beaten to death and burned as a corollary of the Pakistani state’s decades-long policy of pacifying religious zealots. Although the vicious ultra-right organizations once used as a ‘strategic asset’ began to be reined in a few years ago, other sectarian groups that were radicalized as part of the same process have emerged as a new force to reckon with. As extremism entrenched deep into the body politic, blasphemy increasingly became weaponized, an expedient tool that could be employed in various situations: to seize the land of minority communities, to settle a score — even to orchestrate protests to destabilize a sitting government in 2017.

All it takes now is a charge of blasphemy and a few wayward individuals to instigate a mob to commit murder. The lynching of young Mishal Khan at the hands of his fellow students in 2017 is still fresh in our memory. Nor can we forget Shama and Shehzad Masih, burned alive in a brick kiln, in 2014. These are but a few incidents in a long chronology of horror in this country. Each act of mob vigilantism, each sacrilege of a place of worship, each life wrecked as a result amply testifies to the bitter truth: that the state has caved in to the extremists who can exploit it at will by wielding the tool of religion. We must act fast before the entire nation gets consumed by the flames of intolerance and bigotry.