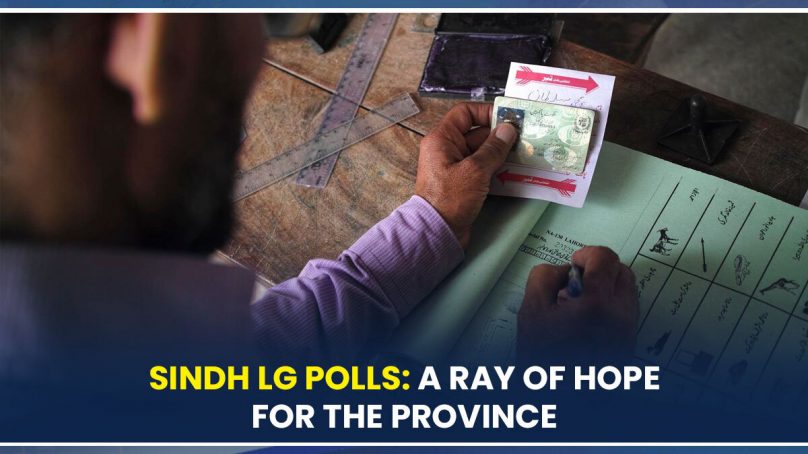 The second round of Sindh’s local elections finally took place on Sunday after massive commotion, despite the province government’s best efforts to scupper this essential democratic process yet again. Thanks to the ECP’s tenacity, elections to choose their representatives for the third tier were held mostly in urban Sindh, notably Karachi, Hyderabad, and a few other districts.

Before Sunday’s polls, Karachi had been without local elected representatives for closely two and a half years. Despite a low turnout that was caused by a number of factors, the voting process was by and large peaceful.

The PPP had already won the majority of seats in Hyderabad and, astonishingly, it also managed to win in Karachi. Due to what it believed to be unfair delimitations and “fake” voter lists, the MQM-P, which has long dominated electoral politics in urban Sindh, chose not to participate in this election. In Karachi, Jamaat-i-Islami, which ran a vigorous campaign and supported the polls, received the second-highest number of seats.

The JI and PTI have questioned the election’s transparency, particularly in light of Karachi’s results’ delayed compilation. Both parties claim that state apparatus was utilized to manipulate the elections. Unless these claims are adequately addressed, as we have seen on the national stage, controversy will taint the LG polls and cast doubt on the process’s fairness.

Therefore, the PPP-led administration and ECP must mollify opponents of the transparency of the polls while the opposition parties, if they have credible evidence of unlawful practices being used to influence the results, must present it.

Regardless of who wins the polls, it’s clear that, given the myriad issues plaguing the metropolis, the task for the new mayor will be colossal. Holding elections in a peaceful manner, despite the ruling party’s concocted fears of terrorism, was an achievement in itself, but convincing the stakeholders about their transparency will be quite challenging. More difficult will be the task to get down to work and rebuild this megapolis into a livable 21st-century urban space.

To this end, the 2013 Sindh local government law has to be amended, especially to give the mayor of Karachi and other civic organizations in the province the powers they need to run an efficient government. The LG elections will mostly be a show of force if the Karachi mayor continues to be a symbolic figurehead and if all municipal authority is still vested in the provincial government.

An elected mayor is required to handle a variety of duties, including solid waste management, water and sewer management, planning, and building regulation. Karachi is in a shambles, and unless the provincial government gives the incoming mayor the resources and authority he needs, the metropolis’s misery will only get worse.