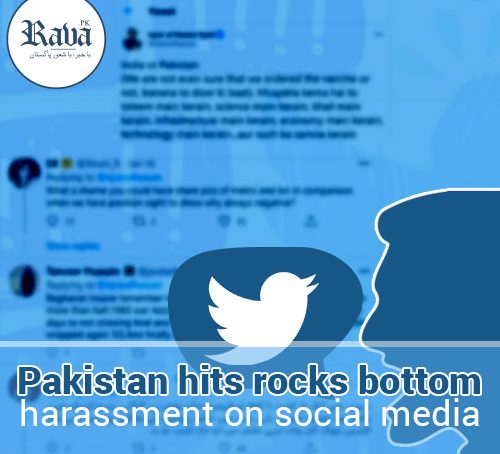 The internet has given us a number of amazing things — Facebook, Google, YouTube, Twitter, online gaming, and so on. But it has also brought new ways of communicating disparagingly about individuals; Internet trolling, which have far-reaching and devastating effects, is one of them.

In Pakistan, unlike anywhere else in the world, trolling has assumed a malicious dimension with women hardest hit by the trend. Women, based on their sexual orientation, specific political or religious views, or even more following than men on a social media platorm, easily fall prey to the vile and hateful comments of the trolls.

In Pakistani society, women already carry the burden of social traditions, including ‘protection of honor and dignity’. In such cases, social media trolls deliberately use vulgar language against female journalists, including language that causes them mental and family distress.

Nabeela, a women’s rights activist and a mental health expert, experienced trolling when she gained more followers. She said she regularly receives comments like “liberal fascist”, “disgusting” and “slut”. But she matter-of-factly, said that she has got used to such poisonous comments and that she no longer pays any heed to them.

Maria, a dancer and model, knows when she puts out certain posts she will get abusive and venomous messages. She said when she put out a video of herself dancing on holiday she received a lot of love but also a lot of hateful messages.

What types of trolls are there?

This is not the first time this problem has arisen; it has been happening for a long time. Social media trolling was taking place even before the PTI government came to power and so were supporters of other political parties.

Zeeshan Ansari, a leading psychologist and social media expert, said there are two main types of troll. The first type of troll targets public personalities with huge social media followings in the hope that they respond.

The trolls then have their odious messages re-broadcast to a broader audience when the target of their trolling, or their followers, respond.

The other type of trolls are people who display a mental characteristic known as ‘negative social potency’, they enjoy inflicting harm on others.

It’s generally believed that trolling has no consequences due to the anonymity that the internet provides, but there are repercussions for the person you are targeting, and for yourself. And this can cause high levels of anxiety and low self-esteem for the victim.

Nabila and Maria both described how trolls made them question aspects of their appearance that they never had a problem with before.

“They can underscore insecurities you already have and create new ones,” said Maria.

“I’ve never had a problem with my political views before; in fact, I’d grown up in an environment where people respected each other’s political and religious views, people the social media is an altogether different world where having a certain belief is a crime, so to speak,” said Nabeela.

What you should do if you’re being trolled.

If you are a constant target of trolls, here are a few things experts advise you should do.