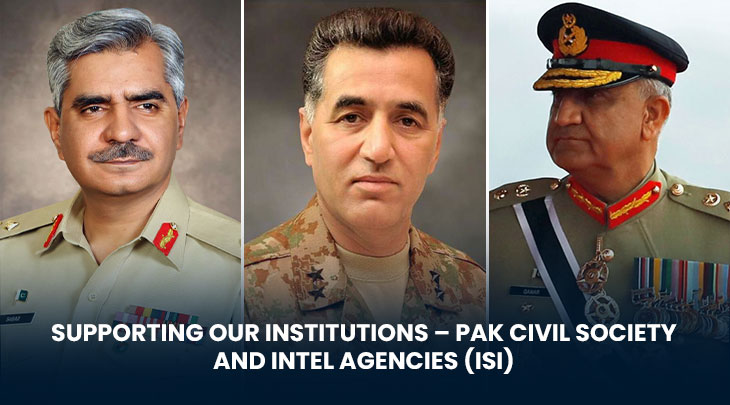 There is no doubt for an objective viewer that Pakistan’s premier intelligence institution the Inter Services Intelligence Directorate better known as the ISI, is facing a litany of “organized” and informal criticism.

The criticism generally aligns with some allegation around human rights and civil rights violations, all in an effort to drive a greater wedge between the Pakistani populace and its premier institution. The Editorial Board at Rava, believes that though there might be some merit to individual instances that require a deeper institutional review and corrective measures, the overall organization of the ISI is a highly professional institution that is a critical state arm of Pakistan. We believe that this institution requires more support and independence, while keeping its workings outside of the public domain. We also feel that any open oversight through political mechanisms will only erode the institutions capabilities not enhance them.

It was in the late 70s and early 80s that the ISI truly took on a broader mandate, as an expansionist superpower on Pakistan’s doorsteps represented an existential threat. From the Libyan-KGB sponsored “Hatorah group”, to Indian subversion through its Al-Zulfiqar and Jeya Sindh proxies as well as the massive terrorism campaigns activated by the Afghan Intel agency KHAD, Pakistan reeled from a spate of brutal internal subversion and attacks. It was the ISI along with other institutions that actively thwarted a multipronged, multi-dimensional attack against the civil and national fabric of Pakistan, all the while balancing its efforts around military counter-intelligence, and external proxy management in Afghanistan in the 80s.

As the Soviet invasion of Afghanistan wound down the 90s saw a morphing of the MQM political movement into a veritable arm of the Indian state. A political organization whose genesis was well-meaning (rights for Urdu speaking and broadly the dwellers of Karachi), was eventually hijacked by the intelligence operators from the East. It was the ISI yet again that helped manage that impending disaster after a struggle of nearly three decades. Notwithstanding the external obligations of the ISI, the institution has been a critical arm of the state to manage the multitude of internal security threats. Given ISI’s limited resources, this institution has done a tremendous undertaking, and should make us all proud.

The Inter-Services Intelligence Directorate, is a strategic and essential arm of the Pakistani state, and as such should be championed and supported. Where the State should make available for the institution additional resources and more importantly a more open landscape to operate, the civil society must allow for the ISI to navigate with more freedom and discretion. The threats against the Pakistani state as stated above are multi-dimensional and often wear a mask that is difficult to discern. Often seemingly innocuous and worthy civil functions such as NGOs, regional and international “training” and “education” centers for Press and civil society are sometime intrinsically tied to foreign operations. In Pakistan’s neighborhood, it pays to have an ISI that is paranoid and thorough. The risks for our nation are too high.