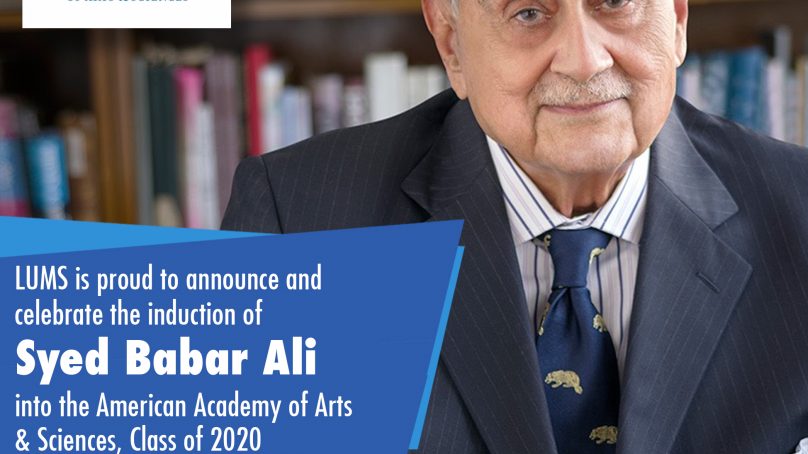 Syed Babar Ali, the Founding Pro Chancellor of LUMS and former President of the World Wildlife Fund, has been elected to this year’s class of the prestigious American Academy of Arts & Sciences

. Recognised for his immeasurable contributions to education, advancing the public good and promoting social equity in Pakistan, Mr. Ali has been acknowledged in the category of ‘Business, Corporate, and Philanthropic Leadership’. He joins an esteemed cohort of over 270 innovators and leaders from across sectors, disciplines, and geographies.

Founded in 1780, the Academy is one of the world’s most respected honorary societies, known for its exceptionally accomplished members and celebration of excellence.

“Babar Ali is incredibly generous to give his time and advice to so many who come to him. I have not come across anyone so enthusiastic to try new initiatives for the betterment of young Pakistanis,” said LUMS Rector, Mr. Shahid Hussain.

Mr. Ali is one of 37 International Honorary Members and joins scientists, academics, and artists from 22 countries.  He follows Pakistan’s Nobel Prize-winning physicist, Dr.Abdus Salam who was elected in 1971, once again bringing Pakistan into the international spotlight.

“Syed Babar Ali is a national treasure who personifies humility, integrity and generosity. His motto is to learn from others and pass on that learning to breed success. He will remain a role model for generations to come,” said LUMS Vice Chancellor, Dr. Arshad Ahmad.

Mr. Ali’s pioneering efforts in building management capacity and an ambitious vision for excellence in higher education in Pakistan are well known to have created a lasting impact on our nation. The Academy’s recognition of Mr. Ali is a fitting tribute to his legacy.

“I feel deeply humbled to be a part of the American Academy of Arts & Sciences, which is dedicated to advancing the public good and strengthening the global community. It is a great honour,” said Mr. Ali.

Established in 1985 as a non-profit, LUMS is Pakistan’s leading university excelling in research and teaching. It stands out by offering a unique experience: learning without borders–an integrated core curriculum across disciplines applied to solving the grand challenges of South Asia and beyond.

LUMS offers over 30 degree programmes at the undergraduate, graduate and doctoral levels through its five schools of Business, Humanities and Social Sciences, Science and Engineering, Law, and Education. The University’s five schools are Suleman Dawood School of Business, Mushtaq Ahmad Gurmani School of Humanities and Social Sciences, Syed Babar Ali School of Science and Engineering, Shaikh Ahmad Hassan School of Law, and Syed Ahsan Ali and Syed Maratib Ali School of Education. LUMS plays a key role in setting high standards of academics and producing professionals who compete with counterparts from universities across the world.