Talks between the government and the banned Tehreek-e-Labbaik: What exactly happened?
Recent View all
Business
Read more

Home  »  Editors Choice   »   Talks between the government and the banned Tehreek-e-Labbaik: What exactly happened? 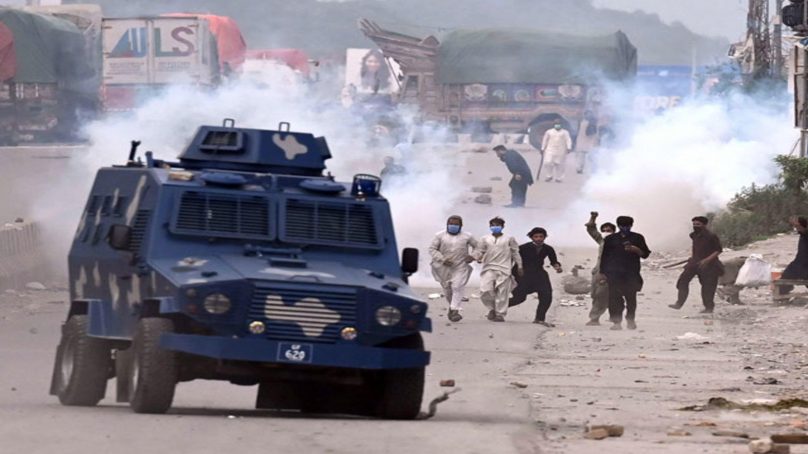 Talks between the government and the banned Tehreek-e-Labbaik: What exactly happened?

Interior Minister Sheikh Rashid Ahmed has said that talks have taken place between the government and the banned TLP. He hoped that all issues would be resolved with the extremist outfit.

Before we go any further, let’s find out why it is time for talks between the banned Tehreek-e-Labbaik and the government.

In September 2020, the French magazine Charlie Hebdo republished blasphemous sketches of the Holy Prophet (PBUH), sparking outrage among Muslims around the world.

In Pakistan, Tehreek-e-Labbaik is one of the religious organizations that has been protesting the issue in Pakistan.

According to the BBC, the government of Pakistan had reached a four-point agreement with Khadim Hussain Rizvi, the former head of Tehreek-e-Labbaik Pakistan, who staged a sit-in on November 16, 2020 in Islamabad demanding the deportation of the French ambassador.

The government was to send back the French ambassador within two to three months after legislation was passed by parliament.

Following the non-implementation of this accord, another agreement was reached between the party and the government in February 2021, giving the government until April 20 to comply with the French ambassador’s deportation promise.

On the eve of Khadim Hussain Rizvi’s chehlum, his son and the new head of the TLP Saad Rizvi warned the government: “If you have forgotten your agreement, look at our history. You have until February 17 to evacuate the French ambassador.”

Saad Rizvi, head of Tehreek-e-Labbaik, was arrested from Lahore. After the incident, the workers, in protest, started sit-ins in different cities of the country, especially in Lahore, Islamabad and Karachi, blocking roads and causing great hardship to the citizens.

At least 300 people, including two policemen, were injured in clashes between party workers and protesters, who pelted stones and blocked the ambulance.

According to another report released by the interior ministry, 2,135 people were arrested from across the country during the last three days of violent protests by Pakistan Tehreek-e-Labbaik, out of which 1,669 were arrested from Punjab and 228 from Sindh.

The report said 193 people were arrested from Khyber Pakhtunkhwa and 45 from the federal capital Islamabad, while anti-terrorism cases were registered against those arrested.

What happened in Pakistan on Sunday, April 13?

According to the APP, Federal Minister for Information Fawad Chaudhry said that police and Rangers officials were abducted in Lahore and an operation was carried out on them. The government believes in talks but there will be no blackmail.

Earlier, activists of the Tehreek-e-Labbaik Pakistan (TLP) abducted several officials, including a DSP, after clashes broke out between protesters and police on Sunday, according to Lahore police.

A video message of DSP Nawa Kot Umar Farooq Baloch also came to light in which it can be seen that he was in the custody of the workers of banned Tehreek-e-Labbaik Pakistan while he was injured.

On the other hand, a statement issued by Allama Shafiq Amini, leader of the Central Council of the banned Tehreek-e-Labbaik Pakistan, said that two of its workers were killed and 15 were seriously injured in the police operation.

He says he will not bury his dead workers until “the French ambassador is expelled from the country.”

‘No talks with the TLP’

Later, Interior Minister Sheikh Rashid while talking to media in Islamabad said that TLP had closed 192 places in the country, out of which 191 places have been cleared.

“Only Lahore Orphanage Chowk is closed and the situation is still tense,” he said, adding that no talks were being held with the TLP.

Tensions rise across the country and call for strike

Mufti Muneeb-ur-Rehman, former chairman of Ruat-e-Hilal Committee, in a press conference on Sunday night, demanded immediate release of arrested activists of banned Tehreek-e-Labbaik Pakistan (TLP) and withdrawal of cases registered against them. A nationwide shutter-down and wheel-jam strike was announced on Monday.

In a statement issued on Twitter, Mufti Taqi Usmani said that the bloodshed committed by the government in Lahore was less to be condemned.

He said that some people who attacked the police were also wrong but the government should act wisely.

Sheikh Rashid said in a video message that the activists of Tehreek-e-Labbaik Pakistan have now gone inside the mosque in Lahore and the police have also retreated. The rest of the issues will be settled in the second round of talks.

The interior minister said that these talks have been successfully conducted by the Punjab government. I hope that the second meeting which will start after dawn will lead to improvement, he said.

Traders and transporters in Karachi have announced their full support for the strike by Mufti Muneeb against the Lahore incident.

Sharjeel Goplani, chairman of the All-City Traders Union, said all markets in the alliance would remain closed on Monday. Similarly, Traders Association Marriott Road has also announced its support for the strike of the Ulema and announced closure of Marriott Road, Bolton Market and surrounding markets. According to Rizwan Irfan, chairman Karachi Electronic Dealers Association, all electronic markets and mobile markets in Karachi will remain closed today.

The most important statement of the Prime Minister of Pakistan has come to light after the clash between the police and the banned Tehreek-e-Labbaik in Lahore.

He avoided direct criticism of the Labbaik movement, saying: “Many political and religious parties misuse Islam; these parties use Islam and harm the country. This country was built in the name of Islam, sabotage in the country will not make any difference globally. We will be campaigning at the grassroots level, bringing together world leaders and raising voices on various forums.”

Is the use of force by the state the right decision?

Not only police personnel but also Tehreek-e-Labbaik workers have been injured in the tragic incidents in Lahore and scenes like civil war have been witnessed in Lahore as a result of which religious parties have used their influence to call a strike today. On the other hand, according to reports, this act is also being severely criticized by many quarters of the PTI. There is no doubt that a large number of sympathizers of Tehreek-e-Labbaik belong to various influential political forces. There was no need to shed blood in a holy month like Ramazan for an issue that could have been resolved through dialogue and understanding. The government should take this issue seriously.

Past experience has shown that sanctions are not the answer. It would be better to find a middle ground on this issue. The government should avoid putting out the fire with fire.