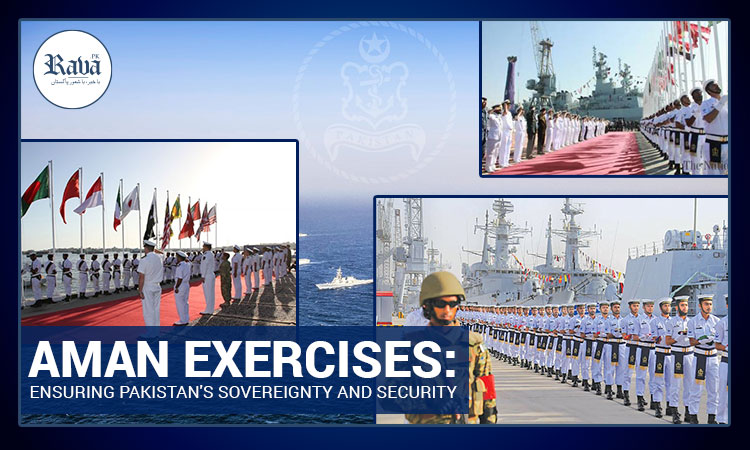 This is the year 2007 when a series of joint naval exercises was launched in our waters by the Pakistan Navy in the name of peace. This series has continued with success, as the basic vision of Pakistan’s forces is peace. Since the ideology of Pakistan is also aimed at peace, these naval exercises were named peace.

It is noteworthy that besides Pakistan, navies of other countries in the Indian Ocean region and beyond also took part in these exercises.

However, it is important to note that the main purpose of these open-sea peacekeeping exercises is to enhance mutual cooperation, confidence and capability in joint operations between the navies of these countries to promote peace and security in the Indian Ocean.

The protection of its waterways and the uninterrupted movement of ships on the high seas are important to all countries in terms of trade and defense.

When it comes to global power competition, Pakistan’s peacekeeping exercises focus on security and naval co-operation in the region. That is why for Pakistan, the protection of the nearly 1,000 km long coastline of the Indian Ocean and the uninterrupted movement of merchant ships in the high seas is a very important task. The BRI is China’s biggest project in the region and C-Pec is also part of it, while Iran and Russia are also going to be part of this project.

The protection of the waters of the Indian Ocean is essential for all countries whose commercial and economic interests are linked to the Indian Ocean. Establishment is the responsibility of all countries, not just one. The region has issues such as unconventional warfare and human trafficking, drug trafficking, which are probably the most prevalent in the world, all connected by sea.

For the past nearly a decade, various naval forces have been working to protect waterways across the Indian Ocean, root out piracy, and prevent terrorists from continuing their nefarious activities through these waterways. The Pakistan Navy is also a part of this. Against this background, the effectiveness of Pakistan’s peacekeeping exercises is further enhanced.

The joint naval exercise, held in 2007, was the first of its kind and involved navies from 28 countries. Following these successful exercises, it was suggested that such exercises be conducted every two years. So far, six such exercises have been conducted and the seventh exercise will be held in the first quarter of this year, 2021.

Russia’s involvement adds to the importance of these peace exercises, as the country is a major power in the region. At the same time, its subconsciously cold relations with India are indicative of Russia’s involvement with China and India. Not happy with India’s rising tensions with Pakistan and India, Moscow has cancelled the annual summit between the two countries with Delhi.

The purpose of this seventh peace exercise is to deal with the challenges of open water with each other, to increase mutual interoperability, while fighting against global terrorism in a traditional and unconventional way, and to send a message to the world that Pakistan is not. It will continue to play its role not only for the region but also for world peace while Pakistan has always conveyed the message to its neighbor that Pakistan wants to prevent Indian terrorism only through peace.

On the other hand, everyone is aware of India’s expansionist war frenzy. In this situation, the importance of these peace exercises increases.

It’s worth appreciating that these joint naval exercises of Pakistan, launched in the name of peace, have played an effective role in promoting international cooperation for regional security. An important feature of these exercises is that the number of countries participating in them is increasing steadily and the number of observers is also increasing in addition to the countries participating in the exercises regularly.

The 7th Pakistan Navy Peace Exercise will enhance not only the military but also the bilateral relations between the countries. These exercises are the best platform to achieve maritime peace and stability while they reflect the true image of Pakistan. The full participation of forces from all over the world in the exercises is also an indication that the modern, talented and powerful countries of the world appreciate the efforts of Pakistan Navy in establishing peace in the region as these peace exercises are for Pakistan.