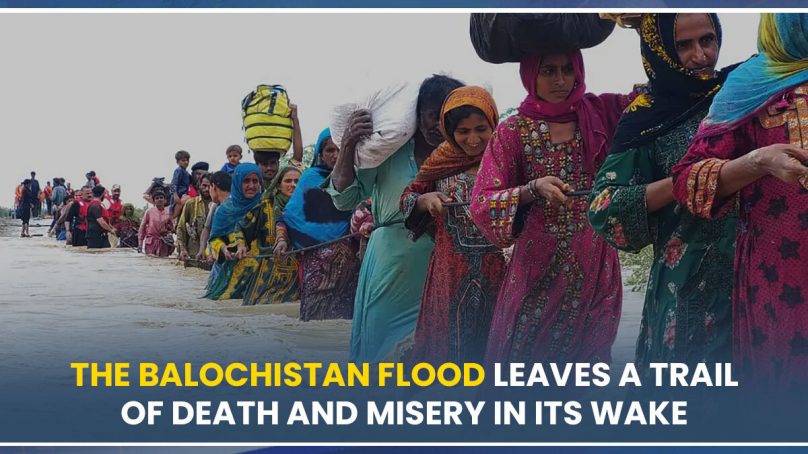 It has been more than a month since the flood that wreaked death and destruction in Balochistan, but the country’s largest — and most neglected — province has not yet recovered from the aftereffects of the devastation.

Balochistan is currently faced with a serious humanitarian crisis amid a severe dearth of clean, potable water and the outbreak of life-threatening diseases.

This flood has had a profound impact on women and children in particular. They are not only facing harsh weather but also various epidemics, malnutrition and inadequate health facilities.

Malaria, diarrhoea, gastroenteritis and various other diseases have hit the flood victims, killing as many as 107 children and 80 women.

Naseerabad division, which includes Jhal Magsi, Nasirabad, Jafarabad, Sahabatpur and Kachchi districts, has been the worst affected by the floods. Other areas such as Jafarabad and Muhammad’s Tehsil Gandakha in Sahabpur have also been badly hit.

Victims left to their own devices

People are still forced to spend their days and nights on the streets under the open sky, although a very minuscule number of them have returned to their homes after the water in those areas has receded.

According to the volunteers in the flood-affected areas, the situation is very alarming. The measures taken at the government level are still not effective, and relief operations are painfully slow.

The district administration claims that it is offering the victims rations and clean drinking water, while medical camps are also effective. Malaria screening, it says, is also being carried out on a regular basis.

The victims have, however, rubbished these claims.

Irfan Lashari, who belongs to Sardar Lashari village of Sahabpur district, says that our rice crop has been destroyed, houses have also collapsed, which has forced us to pull out on to the roads. He also says that, though the FC had distributed ration, that failed to reach us. “Neither any MPA nor any district commissioner bothered to us either,” he bemoans.

Zaheer Ahmad Akbar Khan belongs to Khosa village. He says that there is no water, but dirty water is being poured into the pots. Our children are dying of malaria. While our women are very worried.

A total of 39,00,000 people, including Jafarabad’s 5,13,860 residents, are affected by the flood, according to the district administration of the city. Three relief camps have been set up for the victims in Jhatpat, three in Aosta Muhammad, and two in Gandakha, the local admin claims.

The gravity of the situation can be gauged by the fact that a female volunteer, who was present in Gandakha Jafarabad, said that the women who’ve been out on the roads with their children have no privacy, nor are there are separate washrooms for them.

Worse, there’s absolutely no arrangements for their menstruation. “We even have no clothes to take care of our personal hygiene, especially our menstrual cycle,” said one of the victim women.

According to the district administration of Kuchi Bolan, malaria cases here are less than other flood- affected areas.

There has been no report of death of a pregnant woman during delivery in this district. According to the administration, the hospital is functioning here and there are medical staff and medical assistance for women’s maternity.

While NGOs are also working together with the administration, the rehabilitation work of the victims will also start soon.

According to Anita Ahuja, UNFPA’s provincial coordinator for Balochistan, epidemic diseases are intensifying in Naseerabad division, including malaria, typhoid, gastroenteritis and high fever.

Among these epidemics, malaria is at the top at the moment for which there is no vaccine.

He said that the number of malaria victims in Sahabpur at present is up to 80%, whereas in Naseerabad, Jafarabad, it is more than 56%. The health of women and children is severely affected by malaria, and deaths due to malaria are also regularly reported.

Anita further said that due to malaria fever, the maternity process of women is facing complications and their pregnancies are also being lost while the life of the mother is also facing serious threats.

While Sahabpur Civil Hospital has neither staff nor medical assistance for maternity. The same serious situation is in Jafarabad as well.

In one such maternity case, a pregnant woman was brought to Sahabpur Civil Hospital where the hospital administration asked to take her to Jaffarabad where the hospital administration did not even have a first aid kit and the woman could not bear the pain and died on the way. Women are delivering under the open sky, which poses serious risks to the life of both the mother and the child.

Anita Ahuja said that due to severe flood situation, 14,500 people were sitting on the streets in Saifabad Chowki, Jhal Magsi Chowki Jamali, Saifullah branch, for whom the UNFPA organized a medical camp with six doctors including a gynecologist and a complete medical team with all medicines.

There are at least 140 women in this population who are due to give birth in two months. The flood has blocked the roads and it will not be possible to reach these women safely to the hospital.

Therefore, the UNFPA has decided to establish a Mother and Child Static Center at Saifabad Chowki, Jhal Magsi Chowki Jamali, Saifullah branch, where there will be medical facilities for maternity of women and the newborns will also be vaccinated. Medicines for epidemic diseases will also be administered in these centers.

Talking about the emotional stress faced by women, Anita Ahuja said that women are facing psycho-social issues because they are seeing their children dying of epidemic diseases.

The flood affected women of Balochistan are faced with physical and mental problems. Physically, they are facing malnutrition, epidemics, menstrual problems, miscarriages, pregnancy complications and lack of separate and proper washrooms. On the other hand, there is mental insecurity, feelings of shame, homelessness and severe emotional stress.

There is a pressing need to speed up the rehabilitation and resettlement work in the flood-hit areas of Balochistan. Otherwise, a much graver tragedy awaits the hapless people.