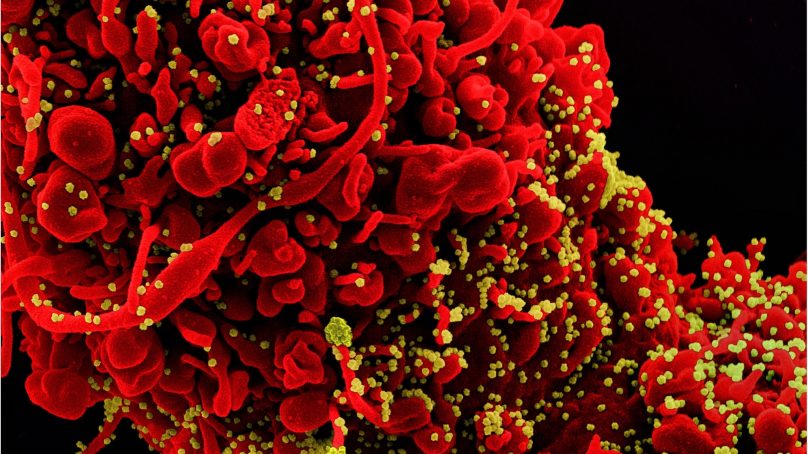 THE spread of the highly infectious Delta variant in Pakistan has sparked fears of an impending disaster.

Dr. Ata-ur-Rehman, Chairman, Prime Minister’s Task Force on Science and Technology, has said that the Indian Delta and Delta Plus virus is highly contagious and deadly, which spreads like wildfire.

According to the latest figures from the National Command and Operations Center, 21 people have died from the coronavirus, bringing the death toll to 22,618. The number of confirmed cases of Covid-19 in Pakistan has reached 976,867. Meanwhile, the fourth wave of Covid-19 is intensifying across Pakistan and the rate of positive cases has risen to 3.6 in 24 hours.

In the fourth wave of coronavirus, the most dangerous type of Covid-19, Delta, has emerged with all its horrors. According to medical experts, the deadliest virus, which originated from India, is even ‘more dangerous than fire’. Highly contagious, this virus is rapidly gaining ground all over the world.

Unfortunately, cases of this virus are also being reported in Pakistan. According to reports, 9 people from the same household in Karachi have been infected with the Delta variant.

All the affected people have been admitted to Covid-19 HDU of Lyari General Hospital. In-charge Covid-19 ICU ward Professor Anjum Rehman said the victims included husbands, wives, children and others between the ages of 10 and 55. The victim’s family is a resident of Malir. Medical facilities are being provided to all the people and the staff has also been alerted.

On the other hand, the Chairman of the Prime Minister’s Task Force for Science and Technology, Dr. Ata-ur-Rehman, while issuing a warning, said that the Indian Delta and Delta Plus virus is the most dangerous and deadly, which spreads like wildfire. The death toll is also high, and the next three to four weeks are crucial. At the moment, the only solution is to strictly enforce SOPs to prevent the spread of the virus.

Dr. Ata-ur-Rehman further said that the rate of cases is increasing again in Pakistan due to carelessness. He urged the people to strictly enforce precautions to prevent the virus by wearing masks, keeping social distance, washing hands frequently and avoiding crowds.

He said that there is also a risk of black fungus from this virus. Hundreds of people in India have also contracted the fungus so if anyone has any eye problem, they should see a doctor immediately.

Talking about Delta virus, Secretary General of Pakistan Medical Association Dr. Qaisar Sajjad said that there is a danger of spread of Indian Delta virus in Pakistan. He also demanded the government close the markets, cattle markets, and wedding halls which do not implement SOPs, saying that the government has a responsibility to protect the lives and property of the people, get them vaccinated and stay safe from the virus.

What Exactly is Delta Variant B B.1.617.2?  The most dangerous type of coronavirus, called Delta B.1.617.2, was reported in India in October 2020. The variant has spread not only in India but in more than 80 countries around the world so far. Pakistan has also been identified. The World Health Organization (WHO) has declared coronavirus variant B.1.617.2 as a cause for concern. In addition to the Delta, the WHO has also identified alpha, beta and gamma variants as a matter of concern. It should be noted that the World Health Organization (WHO) has introduced a system to identify variants of the coronavirus in the Greek alphabet.

According to reports, a subtype of Delta variant has also been created. This is called Delta Plus or AY.1. Worryingly, the Delta variant is undergoing a change in appearance, which has led to several mutations in this variant.

Why is Delta Variety So Dangerous and Deadly?

According to the WHO, Delta variants have been identified or confirmed in 80 countries. In the UK alone, this variant has been diagnosed in thousands of patients. While people under the age of 50 are getting two and a half times sicker than this variant.

British authorities have confirmed that the Delta variant has been diagnosed in 42,000 patients.

According to the Gavi Vaccine Alliance, headaches, sore throats, runny noses and fever may be the main symptoms of the virus. Symptoms of the virus include nausea, loss of appetite, loss of hearing and joint pain, while cases of blight fungus have been reported in people infected with Delta variant in neighboring India.

Are existing vaccines effective against the Delta variant?

Although no official data on Pakistan is available, the United Arab Emirates, where the vaccine is similar to Pakistan, found that 92% of those admitted to intensive care and 94% of those who died were not vaccinated. This indicates the fact that immunizations are effective in minimizing the severity of the infection, if not completely prevent it.

Ino Farm and Cane Cyano: According to Feng Zhejian, former deputy director of the Chinese Center for Disease Control and Prevention, Chinese vaccines are less effective against the delta antibodies produced by Sinopharm and CanSino.

Sputnik V: According to Denis Logonov, deputy director of the Gamaleya Institute for vaccine development, the Russian vaccine is 90% effective against the deadliest variant of the coronavirus, Delta. According to vaccine developers, Sputnik V is one of the best options against various subtypes of the virus.

The fourth wave of Covid-19 in Pakistan has led to an increase in cases, while the presence of a Delta variant is cause for concern. The identification of the Delta variant cannot be ignored as this variant is 43 to 90% more contagious than the previous varieties of the coronavirus. The World Health Organization’s chief scientist, Dr. Somiya Swami Nathan, has expressed concern that the Delta could soon become the world’s most dangerous type of coronavirus, which could once again engulf the world. Complete vaccination is the only answer to avoid the looming catastrophe.