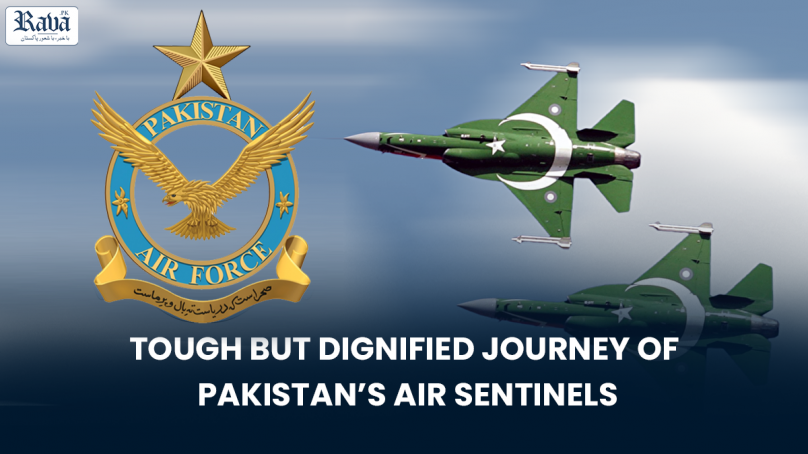 The PAF is currently the fifth largest air force in the world rankings with an estimated 1,400 aircraft and 70,000 personnel.

After the Partition in 1947,  it was a meagre force with only 2,332 personnel, seven airbases, 24 Tempest II, 16 Hawker Typhoon Fighters, 2 HP57, Halifax bombers, eight C-47 Dakotas, and a fleet of twelve Harvard trainers. This Independence Day celebration will take you through the windows of history on the journey of the Shaheens to this high-flying struggle for success and further heights

Pakistan gained complete independence on March 23, 1956, when, according to the first constitution passed by the Constituent Assembly on February 29, 1956, at 11:59 pm, Pakistan gained complete independence from British rule. The post was abolished and Pakistan was declared a republic. With this, the journey of the Royal Air Force came to an end and the journey of the Pakistan Air Force began.

As a member of the Southeast Asia Treaty Organization (SEATO) and the Central Treaty Organization (CENTO), these agreements brought Pakistan closer to the United States and continued to provide economic and military assistance. 100 American-made F-86 aircrafts found. The Pakistan Air Force gradually began to retire its obsolete aircraft, replacing them with F-86 jets. This was the time when Air Marshal Asghar Khan, 36, became the first Commander-in-Chief of the Pakistan Air Force.

After lengthy and patient negotiations between the US government and Pakistan, an agreement was reached between the two countries in September 2006, according to which 18 F-16s were to be delivered to Pakistan and another 18 were to be delivered later. Under the same agreement, Pakistan got 12 F-16s in the first phase and 12 used F-16s from Jordan to Pakistan, which was much talked about by India.

On the other hand, the Pakistan Air Force adopted a strategy of self-reliance during the sanctions imposed on it during this long voyage. Focused on training pilots but also enabling its technicians to become self-sufficient in defense technology today, which can be gauged from just a few examples of what Pakistan’s air power skills are all about.

Pakistan not only improved the performance of the F-16s by equipping them with US-made radar.  In September 2015, Pakistan became the ninth country to develop and use unmanned combat aircraft (UCAV).

While the completion of dual set JF-17 Thunder and production of Block 3 has also officially started at Pakistan Aeronautical Complex Kamra, according to defense experts, JF-17 Block 3 will be one of the most powerful light fighter aircraft in the world.

On February 26, when Indian Air Force planes violated the Line of Control, in response, Pakistan Air Force planes moved quickly and clung to the Indian planes. When the Indian planes saw the hawks coming towards them, they left their payload and ran away. Pakistan’s Surprise Operation Swift Retort had shaken the Indian Air Force and the world once again witnessed the dexterity and agility of Pakistani hawks. Pakistani hawks not only targeted and shot down the Mig-21 Bison” & “Su-30 MKI” and   captured Wing Commander Abhinandan Varthaman alive and served him a “fantastic tea”.

It should also be noted that since the formation of Pakistan, there have been three official wars between India and Pakistan, while the battle at Kargil in 1999 was confined to the borders and on this basis, it is not included in the list of full wars. Analysts all over the world believe that the Pakistan Air Force has always proved its superiority over the Indian Air Force in all battles between traditional rivals.

Pakistan has developed relations with the countries of the world under its defense diplomacy, which includes joint exercises, including some recent joint exercises, including the Shaheen Eagle Nine Anatolian Eagle Exercises and the Assassin’s Creed, which are clear indications of how well organized the operational readiness of Pakistan Air Force is.

On the other hand, according to the confirmed news, the Pakistan Air Force fleet is going to join the Chinese-made multi-role fighter jet J-10C is 4.5+ Generation Fighter Long-range, air-to-air missile Infrared Missile Warning System.For BVR Engagement it has PL-15 & for WVR engagement it has PL-10E HOBS capable missile.

Amid the celebration of freedom, the only prayer before God is that the Air Sentinels may continue to rise to greater heights.