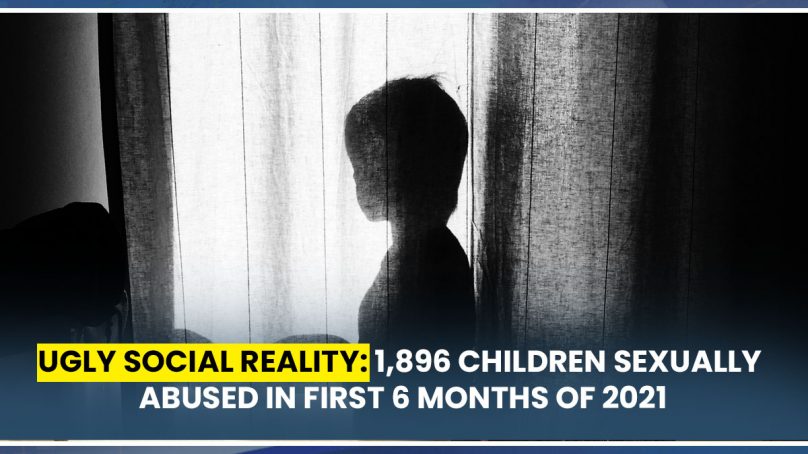 The body of an unidentified 12-year-old girl was found at a metro station near G-11 area of ​​Ramna police station in the country’s capital Islamabad.

The initial post-mortem report proved that the girl had been abused. The victim had wounds and scratches on her body. The girl died due to suffocation.

But the story does not end here. According to the police investigation, there is no one else who killed this innocent man but his own father who made contradictory statements during the police interrogation on which the police arrested the father on suspicion. Taken into custody, accused Wajid identified the place where the girl was killed and also confessed to killing his innocent daughter.

These figures are enough to make you realize that in the first six months of this year, 1,896 children were sexually abused in the country, an increase of 27% over the same period last year.

If we talk about Sindh, then Sindh has Sindh Child Protection Authority, Sindh Human Rights Commission and at the national level there is National Commission on Rights of Children.

Speaking in detail on the increasing incidence of violence and abuse against children, Rabia Khan, a well-known mental therapist, said that the first thing to look at is who we talk about child sexual abuse. It is important to understand this first. We can define child sexual abuse through any activity in which an adult or a person older than a child has sex with a child.

There are two types of sexual abuse. One touching and the other non-touching.

Touching involves all the actions that a person may take to improperly touch a child’s limbs or force them to do so.

These cases are more common in boys. Cases reported on social media are those in which a child is forcibly taken, but in homes or in close quarters, usually a child with low self-esteem or lack of self-esteem is slowly recovering is made to go down this path. Or they may be tempted to go for less that their full potential.

The health, the mind, the psyche of a child who goes through all of this is badly affected throughout his life. Pregnancy in girls is also often seen. Health problems arise. If one of the family members is abusing the child for a long time, then the child becomes depressed and commits suicide. Many children start torturing themselves to get rid of their fears or glitches when they are not able to talk on the subject or there are some who target other children when they grow up or some. Sometimes social workers also become against it.

In addition, sexually transmitted diseases can be transmitted to children. Their specific organs are affected and can sometimes rupture. The child is in trauma. Fear, dread and rejection are all felt. At the family level, it is still considered embarrassing to talk about it, which makes such children more vulnerable.

Non-teaching abuses include showing a child pornography or showing off their genitals or taking pictures of them that are not sexually appropriate in any way. Including showing sex or taking off children’s clothes and looking at their limbs

A person under the age of 18 is considered a child because at that time he did not have enough understanding to make better decisions for himself.

Non-teaching abuses include showing a child pornography or showing off their genitals or taking pictures of them that are not sexually appropriate in any way.

Rabia Khan told the parents that the message for the parents is to inculcate the habit of decision-making in children. If the child does not want to meet anyone, they should not insist on meeting by force but should find out the reason behind their reluctance. Babies should be put to sleep when they are growing up, because this is the age when a child becomes involved in these activities to experience curiosity or new feelings.

Is there any treatment for pedophilia?

In response to this question, Rabia Khan said that it is very important to understand that pedophilia is a problem in which an adult can understand that they are feeling sexual attraction towards children and having sex with them. Such a person is also called an abuser because by speaking to a pedophile we will acquit him. Being a pedophile is itself a disease and a problem. And its victims usually do not even consult a doctor or therapist, so it is difficult to tell whether the person is a pedophile or a child abuser.

If we look at the history of child abusers, it is clear that well-educated people from well-to-do families also become part of it. Or sexual frustration, anger, and other reasons to use their power and control at an early age. For this reason, in most cases, the child has been killed so that they cannot be identified, while pedophiles usually don’t kill children; it’s a disease and it needs to be treated.

Increasing sexual frustration in children: What should parents do?

In response to this question, Rabia Khan said that in the context of increasing cases, if one looks at the environment, porn videos and such content are easily available on mobile. Such cases have increased in men and women for the same reasons. We do not give accurate information to our children and when they see such material, they become victims of sexual frustration and target those who are weaker than them to get rid of this frustration. All these cases existed earlier as well but then they did not come to light. Now there is an increase in them due to all these factors through which people are attracted to these things.

Parents must teach their children the difference between good touch, bad touch and secret touch. This will make it easier for them to understand who is abusing them.

Pay attention to the children, give them love. Children who do not find love at home are attracted to outsiders for their love and immature minds cannot decide what is right and what is wrong.

A report by Sahil, an NGO working to protect children from sexual exploitation since 1996, revealed that more than 10 children were exploited daily during the first six months of the year, including 1,013 underage girls and 883 boys.

In terms of cases, 523 cases of kidnapping, 1084 cases of misconduct, 238 cases of missing children and 51 cases of child marriage were reported.

According to the report, 60% cases of exploitation were reported in Punjab, 26% in Sindh and 5% in Khyber Pakhtunkhwa.

Similarly, the incidence of child exploitation was 58% in rural areas and 42% in urban areas.

According to the report, 16% of the cases occurred in the homes of criminals who knew the children, 12% of the affected children in their own homes, 7% in the streets, 6% in the fields and 49% in other places.

The report said that neighbors, relatives, clerics, teachers, police and shopkeepers were also acquainted with the affected children while blood relatives were also found involved in child sexual abuse.

The senior program officer of Sahil said that the data was collected from the news published in 81 newspapers of the country while the actual number of cases could be much higher as not every incident could be reported in the newspaper.

In 2020, the Legal Aid and Justice Authority Act 2020 was enacted to provide financial and legal assistance to women and children in criminal cases.

However, the high incidence of child abuse reflects the brutal fact that children are not safe and requires tougher laws, while parents must do everything possible to protect their children.