Unprotected Sex the Only Cause of HIV? Not Really! - Rava.pk
Recent View all
Press Release
Read more

Home  »  Editors Choice • Health   »   Unprotected Sex the Only Cause of HIV? Not Really! 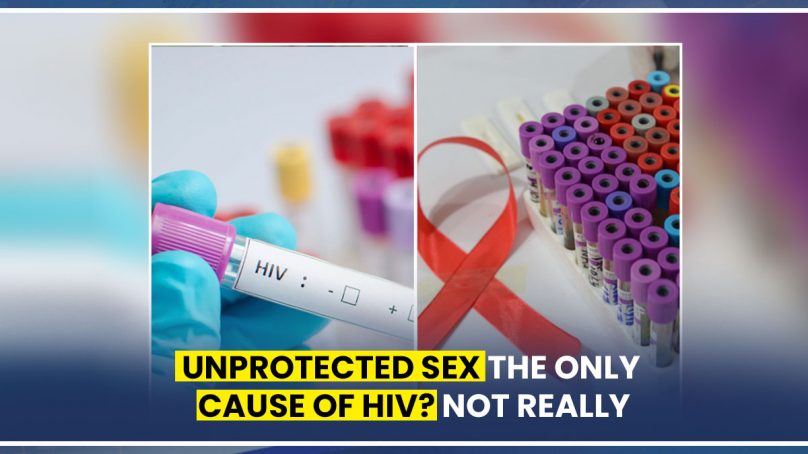 “My daughter is just nine and a half years old and has thalassemia, but the ground came out from under my feet when her test report said she was HIV positive. I am a laborer; I earn a monthly salary of only 15,000 rupees.”

According to doctors, the girl contracted the HIV virus, possibly from an undiagnosed blood transfusion.

According to the official statistics of the CDC (HIV/AIDS) Sindh, as of August 2021, 1548 people have been diagnosed with Unscreened Blood Transfusion due to HIV virus, in which 149 boys and 99 girls, 540 men, a staggering 759 women, and a eunuch were included.

Speaking on the occasion, the CEO of Hussaini Blood Bank said that blood has not been made artificial so far, so the standard of blood donation is that only healthy people donate blood. If the patient is given blood infected with some kind of germ, then nothing can be done, so precaution is necessary for advancement. He said that in order to test the donated blood, it is necessary to do the standard ELISA given by the Sindh Blood Transfusion Authority, but there are also systems that have different results and despite this screening, it cannot be said that the blood supply is sterile. In that case, there is another test that is very expensive and therefore it has not been standardized; otherwise, all but one or two blood banks will be closed.

That test is PCR, but he said that despite this test, there are germs in one or two blood bags. He also said that blood bags containing germs should be disposed of properly.

The Department of CDC (HIV/AIDS), Sindh has set up 16 centers in the province to diagnose the HIV virus and provide permanent free treatment to positive patients. These centers are located in Karachi, Hyderabad, Sukkur, Larkana, Ratodero, Sehwan, Mirpur Khas Benazirabad, and Nawabshah.

A large number of patients were present at the, CDC (HIV/AIDS) department  at the Civil Hospital in Karachi. Upon our inquiry, the management of the center took us on a tour of the center and told us about the process.

The key population grouping of HIV positive people by CDC (HIV/AIDS) is as follows.

A 35-year-old HIV-infected man from Karachi who had come to the center for his routine check-ups and medicines revealed that he had gone to Kabul for work, where he was found to be HIV-positive during the screening. As a result, he had to wash his hands of his job. When he returned to Pakistan, his family refused to accept him.

According to him, before going to Kabul in 2008, he had dental treatment from a renowned doctor, which may be the reason for HIV.

In this regard, according to the official statistics of Sindh, the data of August 2021 revealed that the total number of HIV-positive people using infected/used syringes is 840 out of which 157 are men, 31 are women while 413 are boys, 238 are girls and one is a transgender

It may be recalled that the most horrific scandal in the history of Sindh came to light in 2019 when a large number of women and children were screened for HIV due to the reuse of used syringes.

The government set up Pakistan’s largest screening center for HIV testing and treatment two years ago. The center provides free life-saving medicines to HIV patients, while an endowment fund was set up to provide financial assistance to HIV-positive patients, for which an amount of Rs. 1 billion was allocated.

According to Dr. Irshad Kazmi, Deputy Director General, Addiction Diseases Sindh, 1748 HIV-positive cases have been registered in RatoDero so far.

He confirmed that the Sindh government has deposited Rs 1 billion in the endowment fund and has started distributing proceeds of more than Rs 3 million to the families of 997 affected patients. There are 212 families who could not open a bank account because some people have a problem with their ID cards and many patients have died. However, we will soon transfer the money to the families of the remaining patients.

On the other hand is Dr. Imran Akbar Arabani of Ratodero, due to whom Ratodero’s HIV out break  came to light. Talking to rava.pk , he said that the practice of non-MBBS is still going on in Ratodero, while nothing can be said about the blades used in the barber shops here. He complained that in the beginning this was being given a lot of attention but now it is being neglected.

He said that 44,000 screenings have been done so far while the population of Ratodero at present will be at least more than four lacs, which means that only 10% of the screening has been completed so far and 90% of the population is yet to be screened. Talking about the center, he said that the impression that everything is fine there is not correct.

ARD medicine is available at the center but the accompanying medicines are not available at the moment. He also revealed that, according to the data he has collected, in the screening of 201 people, 20 people are HIV positive, including 12 children. He also disclosed that the screening is ongoing and one five-year-old child is HIV positive, while 57 infected people have died so far, including 53 children.

According to the 27-year-old transgender person who was infected with HIV, she passed the HIV to her partner. When she first found out, she was terrified, but the doctors at the center gave her courage and encouragement. She is receiving full treatment and has been taking medicine for some time, but she admits that she does not tell anyone about her illness because it will alienate her community and her loved ones. She also admitted that her community is fraught with a large number of transgender people who are HIV positive but do not seek treatment for fear of society.

On the other hand, a report from the Sindh Health Department revealed that 3280 people, including 162 children and 3118 adult men, women, and eunuchs, were registered after testing positive for HIV.

It is also important to note that transgender people are the most vulnerable group in society and if they are HIV positive then it is very difficult for them to survive. If he is HIV positive, he should have registered with the department, but because he keeps changing places and changing his numbers, which is a huge challenge for the department.

According to the department, they are trying their best to find the missing persons but it is not easy, while the 40-year-old Peshawar resident was present at the Karachi Jinnah Center for his check-up and medicine. He said that he first stayed in Peshawar jail and then in Karachi Central Jail, from where he contracted the HIV virus. He expressed satisfaction over the medicine and doctors provided by the department. According to official figures from January to July 2021, 2,521 HIV screenings were conducted in Karachi Jail, of which 67 were affected by the Central Jail and 89 by the Malir Jail.

In 2020, the federal government submitted to the court a list of people in prisons across the country who were suffering from HIV / AIDS and other serious life-threatening diseases. According to the report, the number of inmates infected with HIV was 425. According to the official data of Sindh in August 2021, the number of people infected with HIV from drugs is 5239 out of which 5222 are adult males, 7 are adult females, 5 are transgender and 5 are boys.

Affected by unsafe sex practice, the 24-year-old woman said she now lives a married life and has a son who is perfectly healthy. But he complained that the government should arrange some ration for us. According to the official data of Sindh in August 2021, the number of people infected with HIV through vertical transmission is 437, of which 6 are adult males, 8 are adult females, 8 are boys and 243 are girls.

According to the website https://www.aidsdatahub.org/sites/default/files/resource/pakistan-country-card-sep2021.pdf, in 2021, Pakistan has a population of 200,000 HIV positive, of which 38,000 are women, while the number of deaths due to HIV / AIDS has been recorded at around 8,200.

Medical experts say that the HIV virus can be controlled with medication and care and that anyone infected with the virus can lead a normal life like other people.

According to Dr. Irshad Kazmi, CDC (HIV/AIDS) Sindh Additional Director, screening treatments and medicines are provided free of cost at HIV centers in Sindh, and efforts are being made to ensure that those affected by poverty are unable to seek treatment at the center. If you inform the staff about your problem in any way, we help them as much as possible. Counselors are also available at our centers to help.