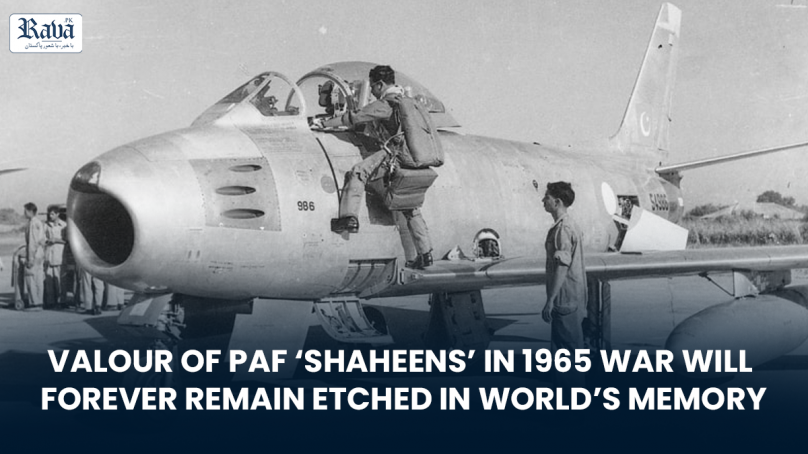 Nature has not created anything without any expediency. In fact, every creation has its own characteristic such as the falcon flying in the vastness of the sky. That is why the falcon has a special significance in Iqbal’s poetry. The flight of our air force sentinels is so powerful that it can conquer the skies. And the nation stands proud of what they have done to the nation; not even once have they failed us.

Intoxicated by its fighting prowess, India suddenly attacked the Wagah sector in the darkness of September 6, claiming that its troops would have breakfast in Lahore. But what the world saw the polar opposite of what the Indians had dreamed: those who were hoping for the breakfast were sent away by the hawks of the Pakistan Air Force in 2019 after drinking tea.

The role of the Pakistan Air Force in the September war was written in golden letters in the chapters of Pakistan’s history. No matter how powerful the enemy may be in terms of numbers, no power in the world can match the strength of determination and jihad. War is not only a name for fighting with weapons, but also with high spirits and great passions. At the beginning of the war, the Pakistan Air Force excelled over the Indian Air Force when 130 vampire planes had to flee into Pakistan’s airspace, including Sargodha.

Pakistan Air Force pilots are among the best pilots in the world. Pakistan Air Force pilots also took part in the six-day war. The Pakistani pilots fought on behalf of the Jordanian, Egyptian and Iraqi air forces and shot down three Israeli air force planes without any damage and were the main reason for the Israeli advance to stop. The first attack in September was on Pathankot where 14 planes were destroyed, one attack happened at Halwara airport, several bloody battles took place in the air in which Squadron Leader Sarfraz Rafiqi and Flight Lieutenant Khawaja Younis Hassan were martyred. Only Flight Lieutenant Cecil Chaudhry returned but these fighters had shot down six enemy hunters. That evening a Pakistan Air Force flight was sent to Adampur and destroyed three Indian planes. Then the bombing at Jamnagar airport turned into a pile of rubble but Squadron Leader Shabir Alam Siddiqui and his Navigator Squadron Leader Aslam Qureshi could not return.

The next day, B-57 bombers attacked Adampur and wreaked havoc. Another flight of bombers was sent to Pathankot to make up for the shortfall. When the same flight returned from there, it took the bomb from its base and went to Halwara. The Indian Air Force lost 22 fighter jets on the first day of the war. The Indians launched air strikes on Karachi and Pindi but did not damage any military or air bases.

On September 7, the Indian Air Force dropped rockets and bombs on Chatgam, Jessore and Karami gangs in East Pakistan, but did no inflict damage. Remember that there was only one squadron of Pakistan Air Force in East Pakistan, as soon as the Indian planes returned. The PAF strongmen rushed to Kalai Kanda airport, where India had parked its fighter jets in a large position which had returned after attacking East Pakistan. The sentinels set all these planes on fire on the ground. On the same day, one of our flying officers, Afzal, was martyred and the enemy lost 14 Canberra and 02 Hunter planes.

On September 7, the enemy turned its full attention to the Pakistan Air Force base at Sargodha and sent its planes in droves to bomb. Four of them were hit by ground artillery. One was shot down by an F104 and five squadron leaders, “Mohammad Mahmood Alam”, set a world record in just one minute. After that day, the Indian Air Force never dared to attack Sargodha during the day. The Pakistan Air Force also sent planes to Fazilka Sector, Chawinda, Sialkot, Jassar and Lahore Sector to help the Army, which destroyed several tanks and vehicles. Occupied Kashmir airport was also attacked where three cargo planes were destroyed. In the first two days alone, the Indians lost 60 planes. On September 8, when India attacked Chawinda Sialkot from the Armored Division, on that day more or less twenty flights were sent only to the front which flew down to the heights of trees and destroyed Indian tanks and vehicles, otherwise iron and fire. It was not easy to stop the flood.

The Shaheens of the Pakistan Air Force not only bombed the Indian Army troops on the fronts of Chawinda, Sialkot and Lahore but also the enemy airports, Jodhpur, Adampur, Anbala, Pathankot, Halwara, Jamnagar and others. By September 16, the Indian Air Force was in such a state that no aircraft could be seen during the day and now the hawks had to work hard to find their prey, such as MM Alam on the river. Flight Lieutenant Yousuf Ali Khan shot down a net near Amritsar. The pilot of the net that was shot down in Chawinda on September 19. On September 21, another Indian pilot, Mohanlal, was shot down and arrested. Its pilot, Junior Curry Apa, was taken prisoner. The ceasefire ended at three o’clock in the morning between September 22 and 23. Chief of Air Staff Air Marshal Noor Khan said that “Pakistan Air Force has become stronger than ever after the war with India.”

“During the war, the problem before me was not how to send clean airmen to attack, but how to prevent them from advancing and attacking,” he told a news conference. However, the score of the air war was that 110 enemy planes were shot down, of which 35 were shot down in air battles, 45 were destroyed on the ground and 32 were hit by ground artillery. It should be noted that these figures do not include the 25 Indian planes that were destroyed at Anbala airport, according to an American correspondent. This brings the number of wrecked Indian ships to 135. The Shaheens destroyed 150 tanks, 600 military vehicles and four Indian trains loaded with ammunition and about a hundred cannons.

In fact, the actual figures are much higher, but the Pakistan Air Force has recorded in its record only the destruction of the enemy, which has been documented. Other sources make it clear that the enemy’s losses were more than double. Fourteen Pakistan Air Force planes were lost. Nine of them were air strikes, four were ground fires and one was an enemy explosive-laden train, which was destroyed by explosives. The world recognizes that the Pakistan Air Force is an invincible guardian of land, sea and air borders. According to PC Lal, Vice Chief of Air Staff of the Indian Air Force in 1965, there was a dangerous lack of communication between the then Chief of the Indian Air Force, Air Marshal Arjun Singh, and the leadership of the Indian Army. Another Western commentator, Frank Morris, commented in the last days of September 1965 that “Indian Air Force Chief Arjun Singh had completely failed to protect Indian airspace and his air force.”

The ‘Shaheens’ proved that they were and are fully capable of defending the country and the nation.

Ambassador of Islamic Republic of Iran calls on Air Chief