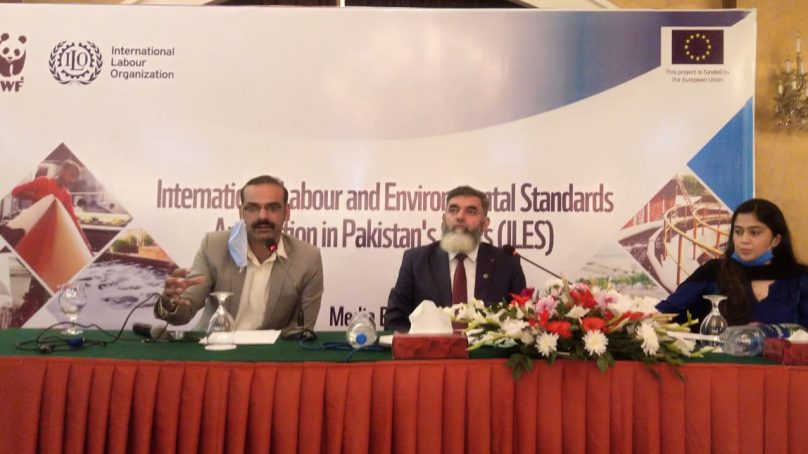 ‘Rapid urbanization, over-population, industrial pollution and lack of storage facilities are aggravating freshwater availability in Pakistan. Over-abstraction of groundwater and mismanagement of rainwater mainly during the monsoon season along with other factors are also contributing to the water crisis.’

This was stated by speakers during a media briefing workshop organized under WWF-Pakistan’s International Labour and Environmental Standards (ILES) Application in Pakistan’s Small and Medium Enterprises (SMEs) project held at a local hotel in Karachi.

Speakers suggested that integrated water resource management, rainwater harvesting, water recycling and reuse should be adopted to address the issue. They also shared that modern technologies should be promoted to tackle solid waste and wastewater in industries that pose a serious threat to the environment.

Speaking on the occasion, Dr Tahir Rasheed, Regional Head, Sindh and Balochistan, WWF-Pakistan said that according to a recent report by the International Monetary Fund (IMF) Pakistan is ranked third among countries facing sever water storage problems. He said that surface and groundwater resources are depleting at a fast pace due to multiple factors including climate change and pollution. To improve water storage, reduce waste water and enhance water productivity, WWF-Pakistan, with support of relevant stakeholders and local communities, is developing detailed water conservation plans. He also urged that freshwater wetlands should be restored, which can provide better livelihood opportunities to fisher and farmer communities and will help revive fish species and populations of resident and migratory birds. ‘Promoting nature-based solutions such as Rainwater Harvesting System (RWHS) and constructed wetlands can help address freshwater challenges,’ he added.

Sohail Ali Naqvi, Manager ILES project, WWF-Pakistan said that the leather and textile sectors are very resource intensive, and generate a significant amount of wastewater and solid waste pollution in the environment. He shared that to improve management of freshwater, 23 leather and textile enterprises have implemented smart environmental management practices. He was of the view that through this project WWF-Pakistan is building the capacity of leather and textile industries to reduce their carbon emissions and shift to clean energies. He emphasized these sectors should adopt cleaner production techniques and improve environmental compliance throughout their supply chains. This will help improve environmental sustainability and ensure continuity of products for international markets.

The textile sector is the most important manufacturing sector of Pakistan with an average share of about 59 per cent in national exports, valued at USD 10,042 million during July 2018 to March 2019. The sector contributes nearly one-fourth of industrial value-added and provides employment to about 40 per cent of the industrial labour force. The leather sector is the second largest export earning sector of Pakistan contributing 5 per cent of GDP and 5.4 per cent to the overall export earnings of the country, contributing around USD 765 million a year (2018-19). This sector, considered to be the most significant, plays a critical role in revamping the economic spectrum of the country.

The International Labour and Environmental Standards (ILES) Application in Pakistan’s Small and Medium Enterprises project, is a European Union (EU) funded project implemented through the International Labour Organisation (ILO) and WWF-Pakistan. It is a six-year project which aims to support the economic integration of Pakistan into the global and regional economy by increasing exports and competitiveness through improved compliance with labour and environmental standards.

SHC: Hearing of petition against sale of sensitive data of 115 million Pakistanis on Dark Web