What if your Arzoo was thirteen years old too? Rava Special
Recent View all
Entertainment
Read more 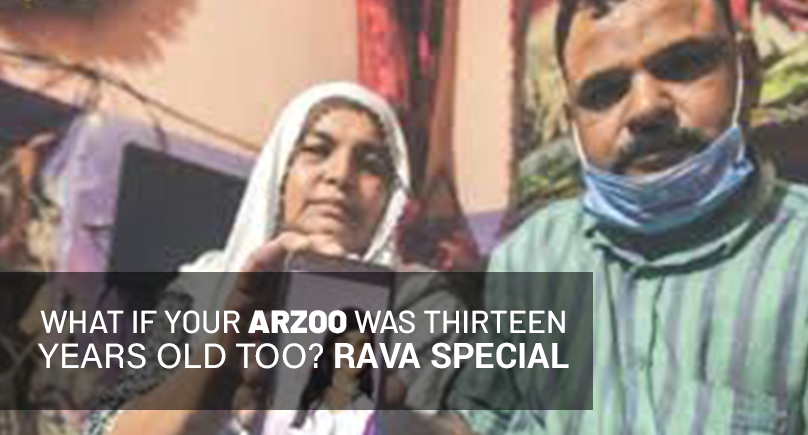 Is there anyone who can tell me and explain in what society we are living in? Who are we, human beings or beasts?

We are living in the age of ignorance where the integrity and life of women is not safe. Even our children are not safe neither at home nor outside.

Is it less oppression getting the news of your daughter being abducted? as if it wasn’t enough, another news came rolling that the search is going on? Neither the earth nor the sky has burst, nor has there been any noise? Is this even an Islamic republic society we are living in?

And then one gets the news that a young, innocent Christian girl free from the deep-seated biases of caste, race, and religion changed her religion.

An innocent little girl who has just taken the first step on the ladder of puberty has suddenly married a man of forty-five years.

Claims telling the girl had willingly married this middle-aged man.

Now parents should be free from all worries and stop searching, forget about your daughter too. Right?

Why does it sound bad to your ears? The girls do get married of their own free will. So, what if her age has just reached the mark of fifteen? And so what if her alleged husband is over forty years old? Who sees the age of the man?

This tragic incident took place in Railway Colony area of ​​Karachi where Raja’s daughter, Arzoo, belonging to Christian community was abducted from outside her house.

In the FIR filed on the complaint of Arzoo’s father Raja Lal, he claimed that on October 13, he and his wife went to work.

While his son Shahbaz went to school. Raja said his three daughters, including Arzoo, were at their home in Karachi’s Railway Colony. When he got a call from a relative who told him that Arzoo was missing.

Raja said he reached home and called his neighbors, but could not trace his daughter.

He then filed a case against unidentified individuals at the Frere police station for abducting his daughter.

But what happened afterwards, was a new twist in the story. When the parents of Arzoo went to the anti-violence cell, they were presented a marriage certificate and told that it’s their daughter’s marriage certificate and that she had willingly converted to Islam and married a 40-year-old, Azhar Ali. Her parents couldn’t believe what they heard. They refused to believe that their youngest daughter, Arzoo who is only a six-grade student, who used to fight for dolls and never left home without permission, could have taken such a big step!

At the request of his parents, an attempt was made to arrest Azhar Ali for kidnapping and then forcing her to marry.

The court granted him pre-arrest bail and ordered the police station near his home to protect Arzoo.

So that it could not be taken back from the custody of Ali Azhar.

The court granted him pre-arrest bail and ordered the police station near his home to protect Arzoo. So that it could not be taken back from the custody of Ali Azhar.

The only document that Ali Azhar presented in court to prove Arzoo’s adulthood is an affidavit apparently signed by Arzoo. The affidavit states that she is eighteen years old and has voluntarily converted to Islam.

The incident took place in Sindh, where child marriage is prohibited by law.

The province’s 2020 law banning under-age marriage clearly states that marrying a minor is a crime. The law asserts clear penalties for those who marry and facilitate such marriages.

When the case reached the court, the Sindh High Court had stopped the police from arresting Arzoo Fatima’s husband and family. And ordered the couple to be protected.

Following the court order, the police recovered Arzoo and sent him to Darul aman.

Arzoo’s husband was also remanded for three days as per the court order. However, when the case became the media highlight, not only the Sindh government but also the federal government came to the front.

On the other hand, human rights organizations also expressed their strongest concerns, while netizens also made a fuss on social media.

What progress has been made in this case so far?

When the Arzoo case was heard in the Sindh High Court, the petitioner Arzoo was brought before the court from the shelter home.

‘I have converted to Islam, my name is Arzoo Fatima, I am 18 years old.’

It was only after Arzoo’s statement that the court ordered the submission of a medical report so that the age of the girl could be determined under the report.

A five-member board determined Arzoo’s age, according to which Arzoo Fatima is between 14 and 15 years old.

Regarding this case, Rawa’s team had a special meeting with Arzoo’s parents in which the important aspects of the story were revealed to the parents.

Arzoo’s parents told Rava that Azhar Ali is their neighbor but they don’t visit his house at all.

Arzoo is very innocent, she has been forced to do all this.

“We are not even allowed to meet Arzoo,” Arzoo’s father told Rava

“All we have to say is get our daughter back,” Arzoo’s father says we are not getting justice

“Arzoo is only 13 years old. She doesn’t know all this. How can someone who’s only desire is to play with dolls can take such a big step?”

Father of Arzoo told Rava that Azhar Ali’s two brothers are also in the police and we are being threatened.

We just need justice and our daughter back.

For more information on the case, Rava’s team reached out Zahid Farooq, a human rights activist from the minority community. He told Rava about the case that the Sindh government has enacted the Under-Age Marriage Act under which this marriage is not legal.

“Our concerns about this case were that the girl was handed over to Azhar Ali,” he told Rava.

After which the Sindh High Court took action and held a hearing on November 2.

“We are very grateful that the court played an important role in this case”.

“Our only concern is how the Islamic institution gives a certificate to a 12 to 13-year-old girl that you can get married even if the man is 40 years old.”

“How a 13-year-old girl is suddenly embraces Islam while a 25- to 30-year-old sensible girl takes time to take such a decision.”

“We just want this case to be investigated properly as well as to see if it is really in accordance with Islamic law.”

With each passing day, a new revelation is emerging in this case.

Understanding the nature of the case, Rava also spoke to Jibran Nasir, a lawyer and well-known social activist.

Jibran Nasir said that all the decisions in this case are interim decisions and no final decision has been made yet.

According to the headway made in the case, an FIR 364 can be registered only when the girl is kidnapped. Given the age of the girl–14 years–the court ordered the girl be summoned under complete security and no one be arrested. However, following the assessment of the girl’s age, the nature of the case changed completely, because the girl, in reply to a question, said she was 18 years old. Meanwhile, the court dismissed the girl’s statement in the light of her medical report.

Jibran Nasir told Rava that this case is of different nature as it involves child marriage, forced marriage, conversion as well as kidnapping.

The court has adjourned the Arzoo case till November 23. Everyone is waiting for the verdict in this cas.

Because in this case isn’t about single matter but a matter of early marriage, conversion. Now the final verdict is awaited.

While it remains to be seen what the future holds for Arzoo, on the other hand, will the characters involved in this marriage really be punished?

However, I still have a question, if your Arzoo was thirteen years old, would you let her marry?