Home  »  Editors Choice   »   Where should the flood victims in Karachi’s government schools go? 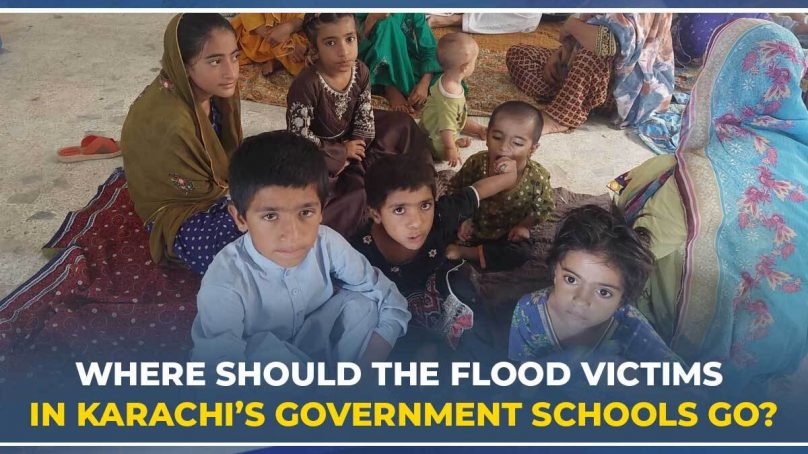 A large number of flood victims from Sindh have moved to Karachi and have taken up shelter in various government schools.

There are thousands of flood victims in fifteen different government schools in District East alone.

This means that the children studying here will not go to school for an indefinite period.

But the moot question is: how long will this large number of helpless people remain here in such a shabby state? This is, unfortunately, a question that no one has an answer to.

Millions of children and pregnant women are affected by the floods in Pakistan and need immediate relief.

Journalist and volunteer Ghulam Murtaza Careo, who is currently taking care of the flood victims in Sachal Goth along with some of his colleagues, says that he does not understand what will be the future of the students studying in these schools, because the government still has not made any arrangements with regard to their rehabilitation.

However, he says that although DC East Raja Tariq Chandio is cooperating immensely and food is being provided by various NGOs, the issues are overwhelming. There are a large number of children, pregnant women and nursing mothers for whom there is neither medicine nor drinking water.

Many women and girls are at increased risk of gender-based violence as nearly one million houses have been damaged in the floods.

According to the UNFP report, damage to roads and bridges made access difficult for flood victims, including access to health facilities for girls and women.

UNFPA Pakistan Acting Representative Dr. Bakhtiar Kadyrov said that the organization should ensure that pregnant women and new mothers get life-saving services even in the most difficult situations.

In various schools of Sachal Goth, women are sitting with their innocent sick children on dirty floors.

Noreen, who came from Larkana, said that it has been three or four days since we came here. “I have a six-month-old daughter who is suffering from fever and diarrhea. We have no medicine here. Our biggest problem here is water and, secondly, we are women, we have a big problem of going to the toilet.”

The women who are forced to breastfeed in front of the men in the room in the dirt and pollution say that there is no veil for us here. There are dozens of people in each room.

“There is no power at night, and we are forced to sleep outside under the open sky for fear of darkness and heat.”

Qamber Shahdad Kot’s Bashira, who is present in this temporary camp with his five children, says that all her children are seriously ill. “Children are crying all night long; we are very worried.”

Jeevan Ali of Goth Qasim Ali Mehrabpur complained of the acute scarcity of water. “There is lack of space, there is no sanitation, there is no doctor or medicine, what will happen if the children are not sick. No one cares.”

In these makeshift camps, children are running around barefoot in torn old clothes. Abscesses, sores and blisters were seen in many children’s feet, hands and head, while many men and women are also affected by skin diseases.

Talking about this, Dr. Ruby, a skin specialist, says that due to these rains, there has been an increase in diseases. The most common infections seen in acute diseases are fungal infections and other bacterial infections.

The main reason for the rise of acute diseases is that people are forced to live in crowded conditions in the relief camps. In this situation, if someone has a skin infection, it swiftly spreads across the camp. These fungal infections are called ringworm, which are very common.

Mosquitoes also thrive in this dirty water and their bites can cause dengue malaria as well as scars on the skin, leading to infection.

Regarding the use of safety pads by young girls and women, Dr Rubi said that there is a dire need for training them. They need to be made aware of cleanliness so that they do not suffer from any internal infection.

Medicines for urgent diseases prescribed by the doctor must be available in the camps, she said.

Meanwhile, WaterAid Pakistan Country Director Arif Jabbar Khan ssaid that the situation of various affected families is worsening and it is likely to become more serious in the coming months. Many people have lost their homes and assets along with their loved ones, he said.

Clean water facilities and toilets have been severely damaged, forcing people to drink contaminated water. In such a situation, even drinking a glass of dirty water can cause many diseases.

He said that there is an urgent need to provide people with eatables, as well as provide them with soap, towels and jerry cans so that they can take care of their hygiene and prevent water-borne diseases. Arif Jabbar further said that it is imperative to restore water resources and provide them with adequate toilet facilities.

WaterAid Pakistan is currently distributing soap, towels and jerry can kits to thousands of affected families with the help of its local partners in the districts of Badin (Sindh), Rajanpur (Punjab) and Swat (Khyber Pakhtunkhwa), while lending a helping by setting up clean water and toilets.

Talking about the situation, Dr. Farhan Rashid, general physician of Karachi, says that diseases such as gastroenteritis, malaria fever, dengue and acute diseases are spreading in the camps of flood victims.

The main reason is poor management of sanitation and lack of clean drinking water.

She further said that the flood victims are currently complaining of respiratory diseases, fever, diarrhea and itching. For this, proper health facilities should be provided to them.

On the other hand, the Sindh government and the urban administration of Karachi must also make adequate arrangements for cleaning, drinking and consumption water in these relief camps established for the flood victims. Otherwise, these flood survivors will die of diseases.