Why are so insensitive as a nation?
Recent View all
News
Read more 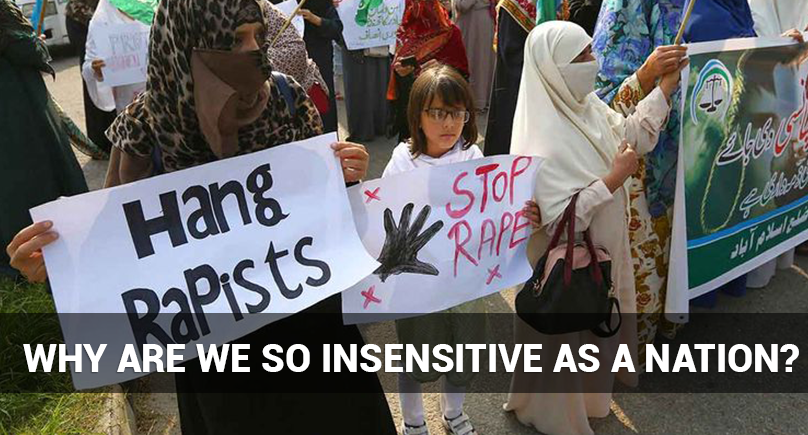 The furor erupted over successive incidents of rape and murder in Pakistan over the last few weeks appears to be dying down. In fact, it was a foregone conclusion. And this is what exactly happens in a nation that thinks more with the heart than the brain.

That we are a nation fond of jumping the gun and knee-jerk reaction goes without saying. Instead of focusing on substance, we opt for form; instead of fixing the rot in the system, we wish to see the system eliminated. Instead of ensuring certainty of justice, we zero in on its severity. Instead of taking to the street to demand our fundamental rights, we resort to futile, fruitless drawing-room discussions. The law enforcement agencies, who are duty-bound to ensure security of people’s life, property, and respect, indulge in victim-blaming. And the media, which is morally responsible for depicting the issues that plague this society, delightfully feeds off the grief and sorrow of the victims of a crime.

The unfortunate incident that occurred to a woman on Lahore motorway two weeks ago is a textbook case of our collective apathy and insensitivity. From a headline-grabbing event, the sordid saga of gang rape has been reduced to a sporadic chatter, which will further wane and then vanish from people’s memory. The coldblooded perpetrators are still at large despite bombastic claims by the police to nap them and bring them to book as soon as possible. Worse, the liberal fascists who went so far as to malign the very existence of men, holding placards that transcended all bounds of decency, seem to have retreated to their comfy mansions and large offices. Suggestions, ranging from the felons’ public execution to their chemical castration, poured in, but no consensus as to how a rapist-cum-murderer should be punished has so far been reached.

An ugly spectacle of rubbing salt into the wound came to the fore, when a popular morning show host, in her avarice to hike her program’s ratings, mercilessly played with the emotions of the parents of a 5-year-old girl who was brutally raped and killed before being dumped in a garbage heap. While she received flak for her outlandish conduct on social media, forcing her to apologize later, there’s no hope that such uncalled-for events will not prop up again, as no mechanism to rein in such heartless hosts exists.

A nation with such insensitive, pitiless attitudes ought not to have any grievances with the status quo unless it gets its act together, and sincerely makes a concerted effort to bring about a positive change in society.