Yet Another Horrendous Crash: Why Train Travel Is So Dicey in Pakistan?
Recent View all
News
Read more

Home  »  Editors Choice   »   Yet Another Horrendous Crash: Why Train Travel Is So Dicey in Pakistan 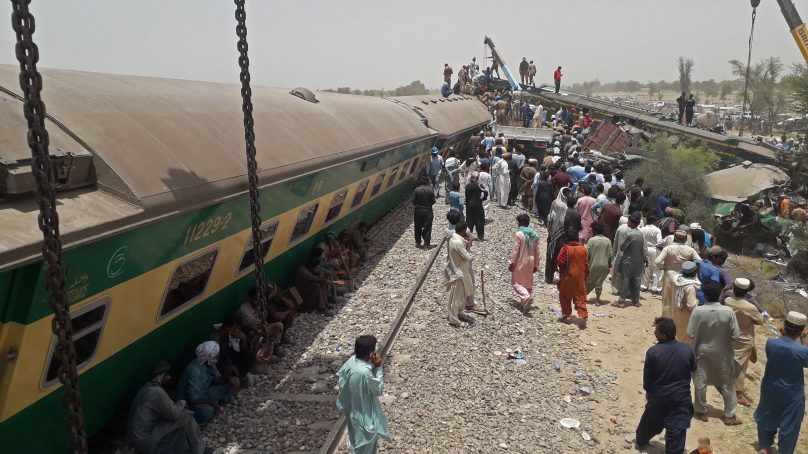 Yet Another Horrendous Crash: Why Train Travel Is So Dicey in Pakistan

According to Rava News, Monday morning in Pakistan started with the bad news that two trains, Millat Express and Sir Syed Express, collided with each other at Reti railway station near Daharki.

The victim of this horrific collision was Millat Express from Karachi to Sargodha.

So far, according to reports received by Rava News, 40 people have been killed and more than 100 injured in this unfortunate incident.

As many as 7 bogies have been affected in the accident, with 3 of them completely destroyed.

At the scene, 6 to 8 bogies are stuck in each other, and several passengers are still trapped in these bogies.

The bogies are being cut to evacuate the passengers, while local rescue volunteers, Rangers and Pakistan Army personnel are also engaged in rescue operations.

According to railway officials, two information centers have been set up in Karachi Cantt and Hyderabad.

For information about the accident, the following numbers can be contacted in Karachi and Hyderabad.

Railway authorities have formed an investigation committee headed by a 21st grade officer to investigate the accident.

According to the railway spokesperson, Rs 1.5 million each has been announced for the heirs of those killed in the accident.

On the other hand, Prime Minister Imran Khan, while expressing deep sorrow and grief over the train accident, said that he was in a state of shock over the tragic railway accident. He directed the railways minister to reach the spot and provide medical aid to the injured.

Railways Minister Muhammad Azam Khan Swati has taken notice of the train accident and ordered an inquiry within 24 hours.

Information Minister Fawaz Chaudhry said in his tweet that the prime minister has said that it’s premature to say whether the accident is terrorism, a technical glitch or a human error.

How did Millat Express and Sir Syed Express collide?

It is to be noted that the condition of Sukkur Division track in Sindh is very bad and according to DS Railway Sukkur this track is dangerous from 13 places and the above authorities have been repeatedly informed about it.

On the other hand, the incompetence, negligence and dozing of railway drivers are not hidden from anyone.

According to ISPR, Pakistan Army relief and rescue operation is underway at the site of the accident. Pak Army teams have taken disc cutters, hydraulic spreaders and life locators from Rawalpindi. Pakistan Army and Rangers troops are engaged in relief and rescue efforts. Rahim Yar Khan Rescue 1122 team is also involved in the rescue operation. Work is underway to cut the frame of the train and evacuate the people trapped in the bogies. Most of the injured were shifted to Rahim Yar Khan, Ghotki and Mirpur Mathelo hospitals.

Sindh Health Minister Dr Azra Pechuho has declared a state of emergency in all hospitals in Ghotki, Khairpur, Sukkur and Larkana. Until the rescue operation is completed, the necessary staff of the health department will be present at the accident site. Meanwhile, emergency has been declared in Rahim Yar Khan and Sadiqabad hospitals on the directives of Punjab Chief Minister Sardar Usman Bazdar.

Chief Minister Usman Bazdar has directed to provide best medical facilities to the injured brought to Rahim Yar Khan and Sadiqabad hospitals and a control room has been set up in the office of Deputy Commissioner Rahim Yar Khan.

According to a report released by the railway authorities, the number of accidents during January-May 2021 has decreased by 23% in the same period of previous years.

From January to May 2020, there were 64 accidents, including derailment and accidents involving passenger and freight trains.

From August 2018 to July 2019, there were 79 minor and major train accidents in which human lives as well as the department had to bear the loss of millions of rupees.

Why railway accidents happen in Pakistan

Here are some of the major reasons for the railways in Pakistan.

Why railway accidents are not controlled?

There is no denying the sad fact that for the last 25 years or so, the railway department has been a victim of political interests. Unfortunately, whenever a railway minister is appointed, he tries to run his job by appointing his favorite officers to higher positions even though they are not qualified.

A clear example of this was the appointment of Aftab Akbar, an inexperienced general manager of railway operations, during the tenure of former railway minister and current interior minister Sheikh Rashid.

On the other hand, the railway tracks are completely rotten, and the signaling system is not working properly.

Surprisingly, in the last few years, most of the serious and dangerous train accidents in Pakistan took place mostly in Sindh.

On February 28, 2020, 22 people were killed in a collision between a Pakistan Express and a bus from Karachi to Lahore in Rohri.

On October 31, 2019, 74 people were killed when three bogies of the Tezgam Express from Karachi to Rawalpindi caught fire near Rahim Yar Khan.

On July 11, 2019, 24 passengers were killed and more than 60 were injured in a collision between Akbar Express and a freight train heading to Quetta near Rahim Yar Khan.

Every time there is a railway accident, traditional statements come to the fore; authorities are asked to submit  inquiry reports and announcements are made to punish those responsible. Politics is done against each other, but no one is ready to accept responsibility. Worse, no heads are rolled.