Your entire brigade was working for Pakistan, Athar Kazmi replied to the Indian journalist
Recent View all
Reviews
Read more 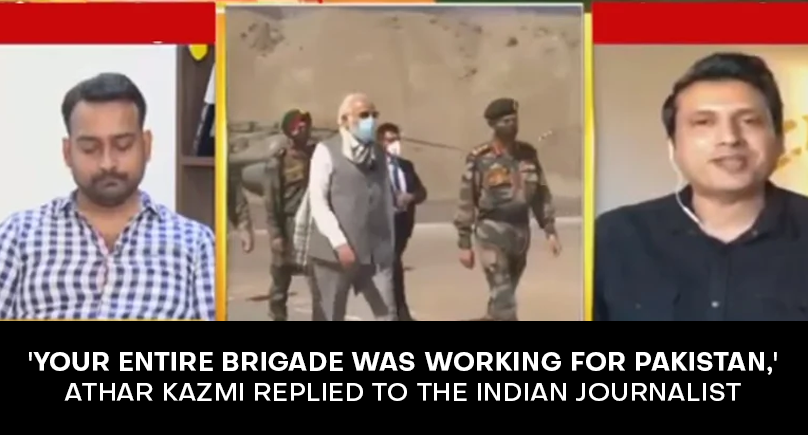 In a scathing response to an Indian journalist, a military analyst, Athar Kazmi, has said that an entire Indian  brigade was working for an intelligence agency of Pakistan.

After the retreat at the hands of China in Ladakh, Indian analysts started blaming and calling Pakistan’s intelligence agencies ineffective, while accusing Pakistan of terrorism to gloss over India’s failures.

The Indian journalist also mocked Pakistan’s intelligence agency, ISI, saying that Pakistanis misconstrue it as the number one agency, even superior to those of China, Russia or the United States.

Responding to the Indian analyst’s sarcasm, analyst Athar Kazmi said, “First of all, I would like to say that if he is speaking against China in Nepal and Bhutan, then your Prime Minister Narendra Modi should learn from them, because not a single word against China has come out of Narendra Modi’s mouth so far.”

Athar Kazmi further said that “your Prime Minister Narendra Modi did not mention China even once during his visit to the India-China border, nor did he say that China should leave our territories. The international media has also asked Modi why he is afraid to name China.”

Responding to the Indian analyst’s sarcasm that only Pakistan can carry out terrorism, Athar Kazmi said that “if you mention Balochistan, then in 2009 your prime minister had confessed that we would carry out terrorism in Balochistan. The BJP had later said that even if the text was washed with the water of the seven seas, it would still not be found.”

At the end of his talk, Athar Kazmi criticized the Indian Prime Minister Narendra Modi’s Corona Fund and said that china has also chipped in the fund announced by Modiji. He went on to say that if he has also has the same problem with China, then at least he should return the Chinese money now.

The blatant, but truthful, comments left other Indian analysts aghast, making them speechless.