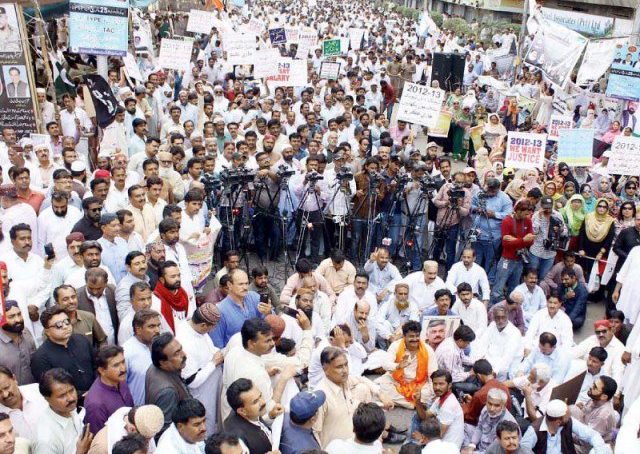 KARACHI: Dozens of teachers were injured as the police resorted to baton charge and tear gas shelling on a rally of protesting teachers who had gathered outside the Karachi Press Club (KPC) on Thursday. Police also arrested more than 200 teachers who apparently tried to proceed towards the Chief Minister’s (CM) House.

Some shells also landed in the premises of KPC compelling the journalists present there to take precautionary measures to avoid the breathing issues due to the smoke.

The teachers, who had congregated outside the Karachi Press Club (KPC) and were moving as a rally towards the Chief Minister House nearby, were said to be demanding basic employee rights, including promotion and group insurance.

The protest was initiated by GSTA for the approval of their demands which include addressing the reservations of teachers due to the insecurity created by the management cadre, to give permanent status to the National Testing Service (NTS) teachers from date of joining, promotions of Sindhi Language Teachers and High School Teachers (HST) to head master and Junior School Teacher (JST) to HST on immediate basis, provision of time-scale according to Grade 17 to government school teachers, Grade 20 contract to HST, issuance of salary of teachers appointed in 2012, provision of group insurance at the time of retirement in the light of Supreme Court (SC) verdict, following the old procedure of appointments in education sector by Sindh Public Service Commission (SPSC), provision of salaries to all government teachers equivalent to government officials working at the CM House, Governor House, Sindh Assembly and Sindh High Court, amongst eight other demands. The teachers have also announced the boycott of matric annual examinations and all academic affairs across the province.

However, police officers intervened and attempted to stop the demonstrators from going near the CM House by baton-charging them and using tear gas to disperse them.

This, on the other hand, led to the protesting teachers announcing to boycott teaching starting today (Friday) throughout Sindh. The decision to boycott comes at a crucial time since the Board of Secondary Education (Matric) exams are scheduled to start April 1.

The boycott, therefore, is likely to put the Matric exams at risk.