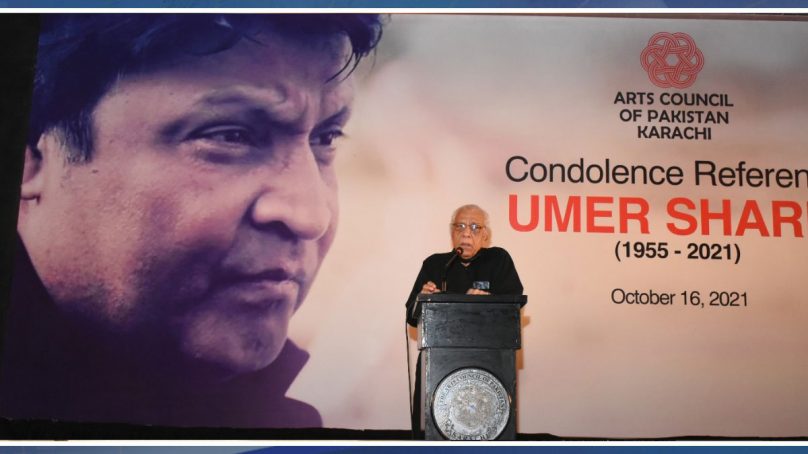 Friends, family, and admirers mourn the loss of legendary comedian Umer Sharif and gathered to offer a condolence reference at the Jaun Elia Lawn, Arts Council.

President Arts Council Mohammad Ahmed Shah announced that Arts Council will hold a theatre festival to pay tribute to Umer Sharif, and each play of the festival will be dedicated to the demised soul.

Karachi: Arts Council of Pakistan Karachi held a condolence reference for the legend Umer Sharif who recently passed away in Germany at the Jaun Elia Lawn. The event was attended by Umer’s family, colleagues, friends, admirers, and various showbiz personalities.

On the occasion president Arts Council Mohammad Ahmed Shah and other participants acknowledged and eulogized the outstanding contributions of the late artist towards the entertainment industry of Pakistan.

Speaking M. Ahmed Shah said, Umer spent his entire career at the Z.A Bukhari auditorium of Arts Council, he made this place alive and he will always be remembered in the council.  We will name a corner of the Arts Council after Umer where all his cassettes and posters will be kept. He was the only artist who gained so much popularity without being on the screen.

Grieving over the death of Umer Mr. Shah further said he left us too soon; his death is an unbearable loss to the entertainment industry. Umer’s art was valued and appreciated across the border. Umer broke the ice to enter this field, the death of Moin Akhter and Umer Sharif created a vacuum that can never be filled, there is no substitute for them.

“I am obliged to the people who gathered here to pay tribute to Umer, my deepest condolence is with his family” Mr. Shah added.

Speaking on the occasion Arts Council’s vice president and senior actor Munawar Saeed in his speech said, Umer respected his elders so much that hardly anyone did. He used to touch my feet whenever he met me, he was a perfect man. I pray to Allah to have mercy on him and grant him the highest rank in Jannah and will continue to do so.

“People praised Umer for his commendable performance on stage; they related to his dialogues, he did not say anything that people couldn’t connect with. Umer was an artist of the era when Moin Akhter was already established but this competition highlighted his creativity further” said senior journalist Mazhar Abbas.

Aurangzaib Laghari said Umer was a nice friend and a great companion. He taught his little ones with great compassion and patronage.

Artist Younas Memon said, Umer was the king of creativity since his childhood, I met him before his departure he was active and fine, we all were expecting his wellness his death is no less than a shock for me.  Umer’s book launch was planned to be held at Abdul Shah Ghazi, I didn’t know that his funeral prayer would be held there.

Comedian Pervaiz Siddiqui said, Umer Sharif is a covenant we have learned a lot from him, and people will keep learning from him through his work. He was a loyal friend, a kind colleague, and a generous actor, director, and producer, he will always be remembered.

Actor Ayaz Khan says Umer was a patriotic person his love for the homeland was commendable. He wanted to live and die in Pakistan. His pictures show that he was a lively man and he will be alive forever.

Paying gratitude to Umer’s admirers, stage artist Salomi said, I am grateful that you all prayed for Umer, I request you to remember him in your prayers forever. So many memories of Umer and us are connected with this place, I urge the Arts Council to name one of the corners of this organization after Umer Sharif.

Artist Saleem Afridi said, I was his junior and learned a lot from him, he used to appreciate me in his last days, and He gave so much love and respect to me which I will never forget.

Senior actor Nazar Hussain said, I met him in the early 70’s he was a passionate young boy and also was a great worshiper who used to pray 5 times a day. He proved himself not only on stage but on television and cinema also.

Umer Sharif’s sons were also present on the occasion, his elder son Jawad Umer in his speech said that he was grateful to everyone who gathered in the condolence reference and prayed for his father. “My father was a great man, I was also his admirer. Wherever he went in the world he kept holding the flag of Pakistan. He rejected US citizenship saying that his green passport is more valuable. My father put smiles on people’s faces all over his life. I promise to fulfill his dream of establishing the hospital “Maa”.