Malala’s comments about marriage get her under fire - Rava.pk
Recent View all
Entertainment
Read more

Home  »  Entertainment   »   Malala’s comments about marriage get her under fire 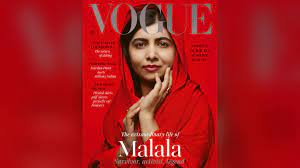 Malala’s comments about marriage get her under fire

Malala Yousufzai, the youngest Nobel Peace Prize winner is catching attention for her interview with British Vogue. She has made it to the front cover of British Vogue which is an achievement on its own. The Oxford grad made some comments during her interview that attracted heavy criticism.

The Pakistani activist said, “I still don’t understand why people have to get married. If you want to have a person in your life, why do you have to sign marriage papers, why can’t it just be a partnership?

The Pakistani audience did not like these remarks and condemned her distasteful comments. People said that Islam has introduced Nikkah which is a partnership.

The 23-year-old also said that she wants to achieve her goals and she cares a lot about her work.