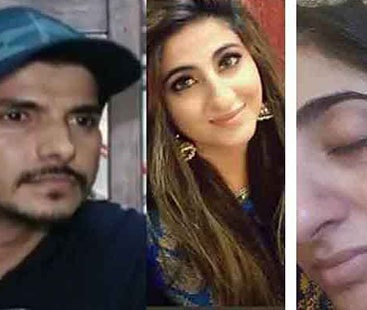 Pakistani actor and host Mohsin Abbas Haider on Monday has rejected domestic violence allegations leveled by his wife Fatema Sohail and challenged her to bring forth assault proofs.

Addressing a press conference, the artist said that his wife fought him and demanded to transfer his house on her name.

Mohsin Abbas said that he has been bearing all the expenses of his wife Fatema and his baby, revealing that he was busy in the shooting of a serial at the time of his child’s birth.

The rebutal came from the actor after Fatema Sohail had alleged her husband of physical violence and claimed that she caught him cheating on November 26.

“Instead of being embarrassed over his act, Mohsin started beating me. I was pregnant at that time. He pulled me from hair, dragged me on floor, kicked me several times, punched me on face and threw me on the wall,” she added.

Fatema further told that when she was in operation theater for the delivery her husband was not with her. “On July 17, I went to Mohsin’s home and asked him to take our son’s responsibility where he started beating me again. He refused to do anything for his son,” she continued.

She told, “On July 20, I filed a report but police termed the incident as minor husband-wife dispute instead of domestic violence or abuse.”

“Truth Told! Now I will see you in court Mr Mohsin!” Fatema concluded.

HBO addresses ‘Game of Thrones’ backlash, prequel in the works