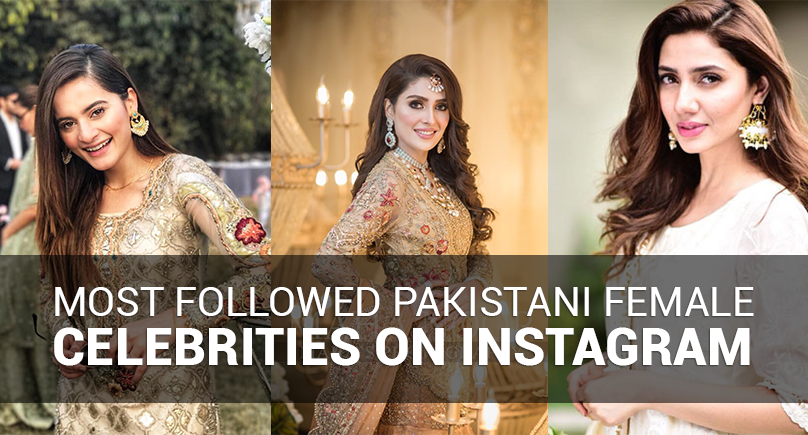 Social media has become an immensely popular platform among all age groups. Like everybody else, celebrities are also quite active on their social accounts to inform fans of their life happenings.

In this day and age, the popularity of stars is gauged by their social media handles, which help them garner massive popularity and huge fan base. No wonder, then, that musicians, models, and actors are the most-followed users on social media today.

Among many social media platforms available today, Instagram stands out as the one mostly used by showbiz celebrities and stars around the world, including Pakistan.

Here’s a list of a few Pakistani celebrities who extensively use Instagram to keep in touch with their fans.

Aiman Khan is a celebrity who has earned immense fame at such a young age that other stars can only dream of. She loves to keep her fans and followers updated and has been actively sharing her pictures on Instagram for quite a while now.

Going strong with my meal plan from @getfitathletic It’s so easy and so much fun to follow because all my favourite foods are included. I don’t have to starve myself or eat only ‘salads’. I never thought i could eat spaghetti, burgers, pastas and deserts all while staying fit 💪🏻 If you’re looking to lose weight, gain muscle or reach your goals without starving yourself, head over to @getfitathletic. They’re a team of registered dietitians, nutritionists, doctors, personal trainers and fitness coaches to help you reach your goals in the best way possible! ✅ Diet Plan: @getfitathletic PR Cordination: @SyedMinnu Styled by @anilamurtaza photography @kashifqadri H &M @thesajidwahabofficial

Even after being a part of the industry for so many years, Ayeza Khan ensures she goes out of her way to keep her Instagram active.

Still enjoying the popularity train thanks to her television drama, ‘Meray Paas Tum Ho,’ Ayeza Khan’s Instagram, with a 7 million followers list, is certainly one of her crowning glories.

There’s hardly anyone who doesn’t admire Mahira’s beauty. She keeps us entertained via her Instagram stories. Although she is one of the stars who don’t regularly post their pictures, she’s definitely someone who doesn’t need to put extra effort to get people to follow her.

Sajal is also among the breed of actors who never tried extra hard to garner followers on Instagram. She lets her work speak for itself. She is the wife of everyone’s heartthrob Ahad Raza Mir and so she mostly shares pictures with him and her pictures taken by him. Sweet. No?

She enjoys 6.6 million followers on her personal Instagram handle.

Jumma Mubarak from a happy heart & a peaceful mind.. May we all live for just this.. may we all understand that this is what truly matters🧡 #JummaMubarak @belovedco.pk P.S a very happy Independence day, let’s cherish our independence on all levels, personally & internally. Only by appreciating who we are as individuals we can form a strong & resilient nation. It all starts with YOU 🇵🇰 #PakistanZindabad Alhumdulillah ✨🙏🏻

She is among the most-followed Pakistani celebrities on Instagram. Mawra used to be very active on Instagram but she hasn’t been too active lately. This stunner’s Instagram account is filled her work, fun, family and her everyday life. Not to forget ‘Jumma Mubarak’ pictures. 😉

Mawra has a staggering 5.8M fans on her Instagram.