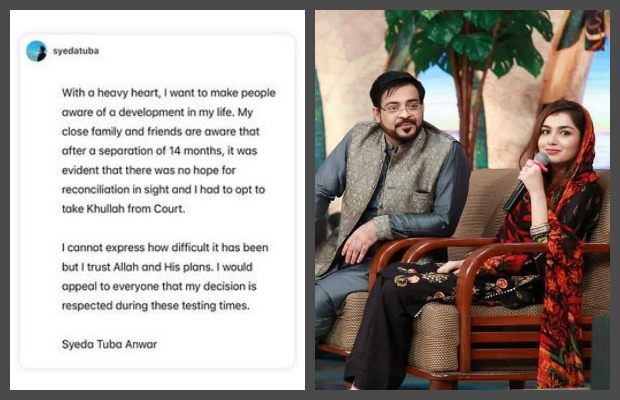 Televangelist and PTI lawmaker Aamir Liaquat’s second wife, Tuba Anwar has finally parted ways with her husband. This she announced in an Instagram post on Wednesday, saying that “after a separation of 14 months it was evident that there was no hope for reconciliation in sight and I had opted to take Khula from [the] court.” She also asked everyone to respect her decision during the testing phase of her life.

She added that her close friends and family were aware of the separation but it is obvious that this relationship cannot survive more. Anwar wrote, “With a very heavy heart, I want to make people aware of a development in my life. I cannot express how difficult it has been but I trust Allah and His plans.”

The couple got married in 2018 for which Amir Liaquat divorced his first wife in 2020, Bushra Amir. Since then, the couple had been in the limelight as many people criticized her for being a house wrecker including Liaquat’s daughter. Earlier, the rumor of their divorce also circulated on the internet when she changed her name to her maiden name.

Bad day for the girl and her family! What do you think about this development?