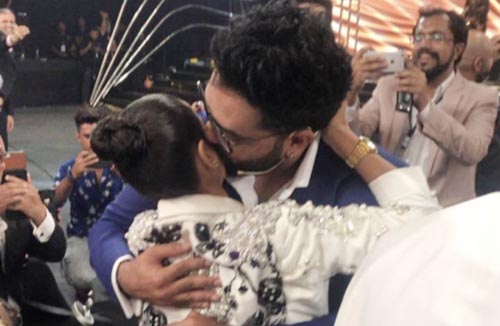 Yasir Hussain on Sunday at Lux Style Awards 2019 went down on one knee to propose to lady love, Iqra Aziz.

The video posted on social media of the event bring mixed reaction over the stunt.

pretending as if she doesn't know anything abt their pre planned stunt
girl there is only one thing tht u r gud at and thts overacting..ker le jitne krne hy#IqraAziz #YasirHussain https://t.co/OMJZeGr5iM

#YasirHussain proposed #IqraAziz at #LSA2019!!
Astaghfirullah how could she let him do that i mean seriously even married couples don’t do that in front of everyone even though they have the right to.
Awww or cute kahne walo pr b afsos ha.
It’s not cute. BeHayai on peak#Pakistan pic.twitter.com/A3N3IvBSNT

I hate #YasirHussain to the core, because of his potty thinking and so called "Oscar" level jokes.
But I'll never ever in my dream say/joke anything about his personal life. #LSA2019

In This episode of #YasirHussain and #IqraAziz, I just realized as a nation, we don't like happy souls; suddenly social norms and religion intervene and everyone becomes Haji.

I don't like and even didn't watch the single drama of both of them. #YasirHussain #IqraAziz
But I pray for them for happy life and healthy life… live long and stay happy always.#LSA2019