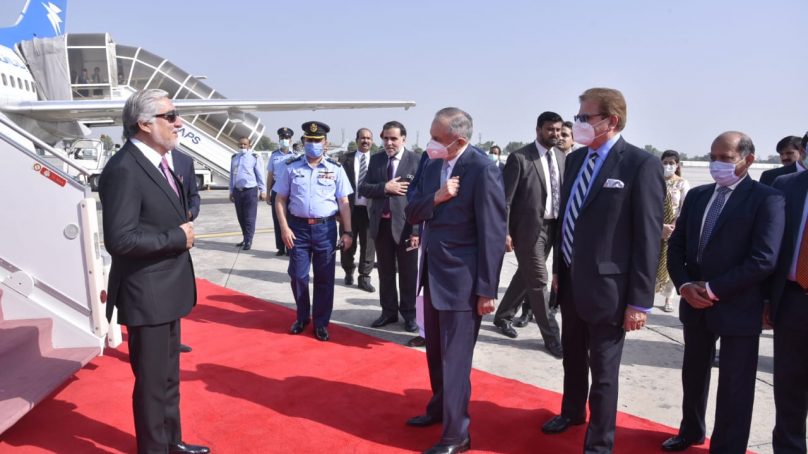 A high-level delegation comprising prominent members of the High Council for National Reconciliation will accompany Dr Abdullah, the Foreign Office announced in a statement here on Sunday.

He will also meet with Chairman Sadiq Sanjrani of the Senate, Speaker Asad Qaiser of the National Assembly, Foreign Minister Shah Mehmood Qureshi and others.

The Afghan leader will also speak at the Islamabad Institute of Strategic Studies and meet with journalists as well.

This is Dr Abdullah’s first visit to Pakistan in his capacity as chairman of the national Reconciliation High Council.

The visit would provide an opportunity for a wide-ranging exchange of views on the Afghan peace process and the strengthening of bilateral ties and cooperation between Pakistan and Afghanistan.

Its fraternal ties with Afghanistan, deeply rooted in shared history, religion, culture, values and traditions, are of great significance to Pakistan. Pakistan fully supports all efforts made by the Afghan people for peace, stability and development.

Dr. Abdullah ‘s visit will contribute to the further expansion of the two countries’ relationship, brotherhood and close cooperation.

In an exclusive interview on Sunday with Pakistan Television, National Assembly Speaker Asad Qaiser said Dr Abdullah Abdullah’s visit to Pakistan will be a milestone in cementing Pak-Afghan relations. He said Pakistan completely supported an Afghan-led and Afghan-owned peace effort, adding that the best interest of Pakistan and the region was to have a peaceful Afghanistan.

Mr. Qaiser claimed that, regardless of ethnicity, the people of Afghanistan and Pakistan were bound together by everlasting cultural, religious and historical affinities.

The speaker said that regular political and functionary engagement had foiled foreign attempts to disrupt bilateral relations between the two nations. He said that parliamentary interaction would foster those relations further.

The speaker said the trading communities on both sides could play an important role in improving their national economies, referring to Pak-Afghan trade. As president of the Pak-Afghan Parliamentary Friendship Group, he said he had set up the group’s task forces to address issues at the Pak-Afghan frontier.