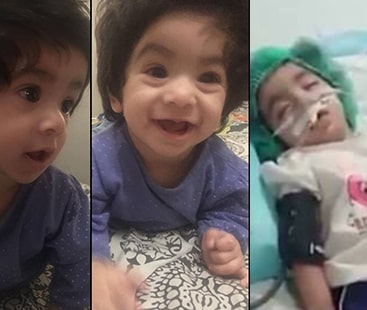 According to sources, A nine-month-old girl was paralyzed allegedly after being administered ‘wrong injection’ by ‘untrained nursing staff’ at Darul Sehat Hospital located in Karachi’s Gulistan-e-Jauhar area.

Father of the girl, Qaiser, told the media that her daughter, Nishwa, was paralysed due to ‘wrong injection’ given to her by the ‘untrained nursing staff’.

Qaiser said that he brought his twin daughters to the hospital for treatment of diarrhoea. He added her daughters were injected three drips on different timings. The father said that condition of one of his daughters Nishwa was worsened when the family prepared to leave for home.

“An on-duty doctor told me that condition of my daughter would be better till morning if I leave her for one night. A nursing staff member, Moiz, came in and administered a drip.”

He claimed, “The injection which needs 24 hours to be dissolved into the body was administered once that worsened my daughter’s condition and her lips went yellow.”

Qaiser said that the hospital staff had confirmed that the girl’s condition had worsened after administration of the wrong injection.

“My daughter was kept on the ventilator for next one week at the hospital and she was paralysed when doctors removed her from the vent machine,” he added.

The father further said that he has registered a case against the hospital staff and administration.

Sources said that it was not the first case reported from the hospital as various lives were destroyed following the severe carelessness.

Free healthcare services to be provided to dengue patients

6 amazing tips that will help you improve your running performance