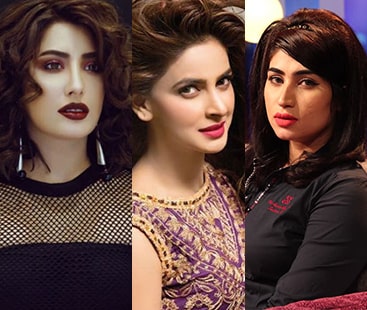 Times when Pakistani Women were ridiculed or bullied for their achievements

Mehwish Hayat has recently been the target of internet trolls and haters for receiving the Tamgha-e-Imtiaz. Soon after she got awarded, hate comments started pouring in on social media. To which, Shehzad Roy took to twitter and expressed his support for the actress and other women who get mocked for their achievements.

“People waste no opportunity to tear down the arts and women in Pakistan. So of course, if a woman wins an award in the arts, all hell would break loose,” tweeted the singer.

People waste no opportunity to tear down the Arts & women in PK. So ofcourse if a woman wins an award in Arts,all hell wud break lose.U @MehwishHayat won the debate tht followed & created an enabling enviroment for women from arts to come fwd.& when they do,trolls wil think twice

Other celebrities tweeted in her support and praise as well.

Ignore negative propaganda and learn to live in an intolerant society by promoting tolerance accept my congrats on receiving a national award on Pakistan day you deserved it because you performed very well in recent films https://t.co/yK3qW2YB8h

Fact: Her movies hv been the undisputed top grossing movies

Fact: She has been one of the faces of revival of cinema in Pak.

When you ignore facts,you only hv slander left.
And tht’s wht is happening with Mehvish Hayat.
Support your artistes,Pakistan.

Agreed. This reprehensible culture of name calling on twitter has got to stop. A platform created to give a voice to the voiceless and disseminate useful information is now also flourishing as a source of unchecked abuse. @jack @Twitter https://t.co/nOj0abkbiQ

Looking back at the last few years, there are plenty examples of Pakistani women, stars and otherwise, being torn down for their achievements or even just because. Let’s take a look at 7 such cases.

Case #1: The female PIA pilots who became the first female crew to land a plane in Gilgit

“Our dynamic duo, Captain Maryam Masood and First Officer Shumaila Mazhar, make it look so easy as they fly through the mountains celebrating the beauty of our northern areas! Way to go!!” PIA said on Twitter. A route which is known to be “very challenging and requires a lot of precision and technique,” the airline added.

But of course, their achievement gathered ridicule and anger from some:

When pictures of Mahira Khan and Ranbir Kapoor surfaced, internet trolls began shaming the Pakistani actor for wearing a dress and fraternising with an Indian actor with a cigarette in hand.

Thankfully, the film fraternity in Pakistan umped in to defend her. As a whole, these celebrities can teach us a thing or two about responding to trolls. 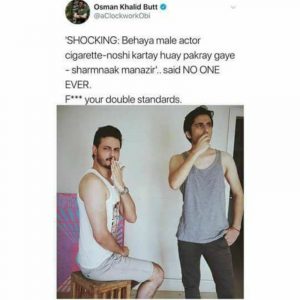 Naseem Hameed has an impressive record time of 11.81 seconds for a 100 meter race and for some men that’s a little hard to digest – because, well, the inflated male ego.

When UN Women Pakistan approached men and asked them to beat Naseem’s record as part of their #BeatMe campaign, the men’s uppish attitude was one to applaud, their attempt, not so much. “Yes. I can do it. It’s easy,” one said. “I can do it in 10 seconds, or even 8”, except that nobody came close to her record, let alone beat it. 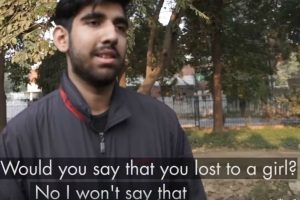 Case #4: Saba Qamar snapped without her consent during hair and make-up

The actor was in hair and make-up when someone snapped a photo of her without her consent and posted it on social media – where it went viral and was the beginning of name-calling, bashing and slut shaming.

Local celebs, however, sick and tired of this tirade against their female counterparts stood up for Saba, one of them was actor Aijaz Aslam who posted, “Today I feel sad that a colleague and one of the finest actor of Pakistan is being exploited by someone for a cheap publicity stunt. It’s disgusting that people can go to any extent for cheap publicity… Saba you are a superstar and don’t let these haters demotivate you.”

Today I feel sad that a colleague and one of the finest actor of Pakistan is being exploited by someone for a cheap publicity stunt … it was just a simple BTS ( behind the scene) vdo during a photo shoot from which the screen shots were taken and made viral on social media … its disgusting that people can go upto any extent for cheap publicity… saba you are a superstar and don’t let these haters demotivate you .. #wesupport #sabaqamar #pakistanidrama #pakistanimovie #pakistanifilm #repost #instapakistan #instalike #movieshoovy #divamagazinepakistan #showbizpakistan

Case #5: The woman who couldn’t honeymoon with her husband 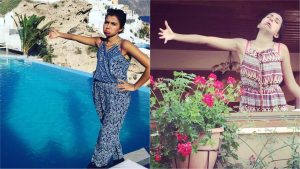 Huma Mobin was devastated when her husband Arsalaan’s Schengen visa got rejected for their second honeymoon/family trip – the green passport curse. However, she decided to make the best of a bad situation and soldiered through while also sharing photos with a sad face and one hanging in the air to show just how much she missed her husband.

That was enough for some to shame her for her clothes and choosing to go on the trip without her husband.

Let alone the fact that Malala is ripped to shreds on a daily basis by Pakistanis for just existing, but even the act of her in jeans causes cultural anxiety and she immediately became the target of hate and moral policing.

Nevertheless, Malala deserves applause for continuing to stand tall, above and beyond the country’s patriarchal mindset, wherever she goes.

Qandeel Baloch was a social media sensation; people watched her videos and hated on her, they followed her and slut-shamed her, yet her fan following only increased. They liked what they saw, but they couldn’t stand a woman owning her sexuality and not lending an ear to the hate.

From the comments that appeared under her posts, young men wanted to be with her; they also wanted to snuff her out. Young women were horrified by her ‘immodesty’; they also lauded her for doing exactly as she pleased.

Ultimately, she was killed by her own brother for ‘dishonoring’ the family. But her murder proved that if you’re a woman in Pakistan, ambition can get you killed.