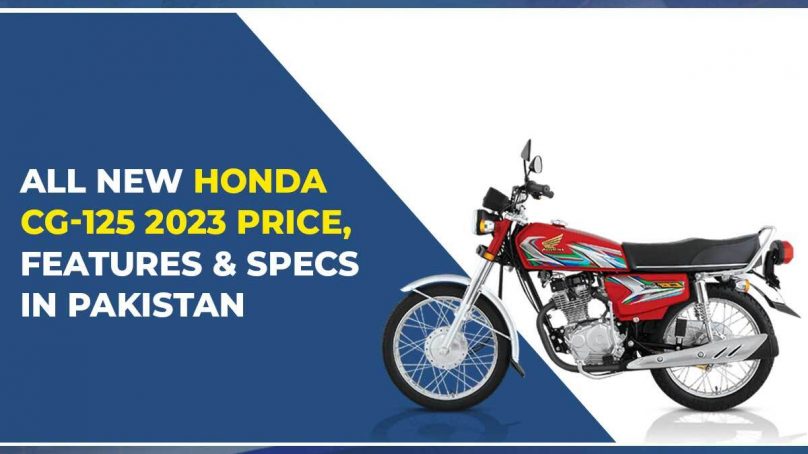 Make no mistake: Honda CG 125 is a craze in Pakistan; every bike rider in the country wants to own one. But there are tangible reasons why the bike is the number one choice of every biker in Pakistan, especially its durability and affordable price.

The Honda 125 2023 model was introduced in Pakistan just one month after the Honda 70 2023 model. Now, the CG 125 and 125 SE 2023 models are released simultaneously. “Honda 125 Self” is the new moniker for the SE model. There isn’t much to say about the changes made to the new bikes because the company respects culture and customs and updated the stickers in accordance with such traditions. Fantastic news: the 2022 and 2023 models of the Honda 125 are identical in price.

Are you curious to learn more about the Honda CG 125 and 125 SE models that were only recently released? Let’s talk about the details.

After the Honda 70, the Honda 125 is the most popular motorcycle in Pakistan. Its new 2023 model appears to have the same body as the outgoing one. It is also touted to be both excellent and awful at once.

The unfortunate issue is that Honda enthusiasts will merely receive a new sticker without any design changes. The majority of them want to modify the design (make it a little sportier) and do away with the traditional body form. For that goal, the business had undoubtedly introduced the Honda CB 125F, albeit at a significantly greater cost.

The good news is that if the firm had changed the design or parts, you wouldn’t have any issue finding spare parts.

As expected, the specifications and features of the new Honda CG 125 are the same. Well! Many people think it’s fantastic since they like the design and performance, which is unmatched even by its higher model (CB 125F).

The Honda 125 SE (special edition), which serves as a link between the CG 125 and the CB 125 F, is the Honda 125 Self 2023 at the moment. The block version of the new Honda 125 Self 2023 model now has a gasoline tank with a matte finish in addition to a new sticker. Now that the fuel tank is matte black and the side covers are chrome, the motorcycle looks much bolder. On this variant, the Honda logo is more noticeable. It appears that the red model just received a sticker modification.

There isn’t much to discuss besides the matt black color and new sticker style. Instead of a 4-speed transmission, the Honda 125 SE has a 5-speed one. Additionally, it has a kick start and an electric alternative. Compared to CG 125, SE 125 has a slightly longer wheelbase and higher seat.

The Honda CG 125 2023 model is the same as the one that was released in 2018 with the new adhesive tag being the only difference. The motorbike has been the most popular option in the 125cc category since its inception in 1992. The Honda CG 125 is well known for being dependable, durable, and easy to maintain. When buying any type of vehicle, Pakistanis place great value on the motorbike because it has the highest resale value in its category.

Customers still receive the standard design for the CG 125 and 125 SE / Self 2023 models along with a revised sticker in the end. Only the SE Black variant features a matte paint finish that looks better than earlier models. A benefit for fans of the Honda 125 is that the new model’s price in Pakistan is the same as that of the 2022 model. We can only hope that the company ultimately responds to customer requests and makes the aforementioned adjustments.

The Honda CG 125 2023 model, according to Atlas Honda, is the same as the one from the previous year with the addition of a brand-new label that reads “NAWEE PATTI.”

Suzuki GSX 125 Vs Suzuki GR 150, Which One You Should Buy in Pakistan?