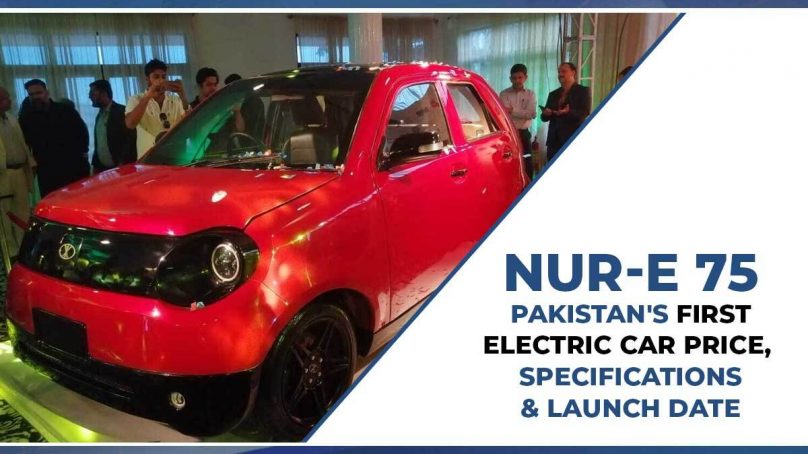 Amid the hue and cry of Pakistan’s volatile political landscape, Pakistan has a rare achievement to its credit.

On the occasion of Pakistan’s 75th Independence Day, the Distinguished Innovation, Collaboration & Entrepreneurship (DICE) Foundation, a non-profit organization located in the US and run by Pakistani expats, introduced Pakistan’s first electric vehicle prototype, known as the NUR-E 75. The car’s battery will have a 35kWh capacity, and after charging, it will be able to travel 210km per hour.

Dr. Khurshid Qureshi, the founder and chairman of the DICE Foundation, claims that the vehicle’s maximum power is 108 horsepower (80 kW), and its battery can travel 210 kilometers (km) without the air conditioner on. The totally electric vehicle also features a 220V charging capacity in eight hours, with fast charging also an option, a top speed of 120 km/h, 16-inch tires, and 190 mm of ground clearance. He also said that work is already underway on the design of a rolling platform that will be utilized for several vehicle sectors, and that the fully working prototype, EV NUR-E 75, is ready for testing and regulatory approval.

During the ceremony, he added, “South Korea learned to make television from Japan and today it is making better TVs. “I cannot emphasize enough how important this innovation is and how it will revolutionize both Pakistan’s economy and its citizens’ quality of life.

According to Dr. Qureshi, the car will use 60% locally made components when it is commercially built, and that percentage will rise to 80% over the following few years. He stated that the price of the Nur-E 75 will be significantly less than that of the Honda-E and Nissan Leaf, which are vehicles in the same market and are priced at $40,000 and $35,000, respectively.

He added that EVs were the way of the future for the car industry and that “we have wasted enough time importing.”

“In the context of the environment and climate change, this electric automobile will play a phenomenal role and assist in our transition away from the use of non-renewable fuels. We intend to build a sedan and a small SUV on the same platform in addition to this 5-seat hatchback prototype, according to Dr. Qureshi.

The prototype’s developer, Dice Foundation, claimed that the vehicles will save a significant amount of gasoline, aid in the fight against global warming, and maintain economic prosperity. Dr. Qureshi claims that there are three stages to the production of a car: the first involves the industrial design, production, and launch; the second involves expanding production to include sedan and SUV, small commercial trucks, and export of EV platforms; and the third involves exporting the vehicles.

We still know some of its fundamental details and standout characteristics, even though nothing is finalized yet. At the unveiling event today, JaXari revealed those. What is known about the electric hatchback’s specifications is listed below.

Since the Nur-E 75 is still in the conceptual stage, various adjustments are likely to be made before it is put into production. This is the first electric hatchback produced in Pakistan, and our industry’s decision to take this step is essentially a first.

Whatever the case, the country is quite optimistic and enthusiastic about it. To begin the commercial production of the car, the DICE Foundation is currently looking at securing a significant amount of financing from Pakistanis and Pakistanis living abroad. It is anticipated that the production of the Nur-E 75 could take up to three years.

Price Details and Other Features

The Honda-E and Nissan Leaf, which are in the same sector, are priced at $40,000 and $35,000, respectively, according to Dr. Qureshi. “But the Nur-E 75 will be priced significantly lower than that,” he added.

Another official, though, stated that customers shouldn’t anticipate an automobile with a sub-$2 million price tag.

The car can attain a top speed of 127 kmph during testing and requires eight hours to fully charge. On a full charge, it has a 210 km range.

The promotion of domestic automobiles in the nation, according to Masood Khan, a former president of the Pakistan Association of Auto Parts and Accessories Manufacturers (PAAPAM).

“Pakistan’s creation of its own electric vehicle is a significant accomplishment. To compete in the global contest when electric vehicles begin to rule the road by 2040, we must start today, according to Khan.

Khan stated that the project needed the participation of all parties to be successful and that it was a crucial initiative.

There are not many differences in the specifications and features of the two EV Rinco Arias. Rinco Aria is available for Rs. 24 lacs. Nur-E 75’s chances of success on the market depend on how much less expensive it is than Rinco Aria’s. Nur-E 75 would not perform well in terms of sales unless it is cost-effective.

Nur-E 75’s commercial viability won’t be determined until the vehicle is introduced and its price is made public. If the car is a success, there will be a significant shift in Pakistan’s auto sector. We will have to wait till Nur-E 75 is formally introduced to the market before learning that.