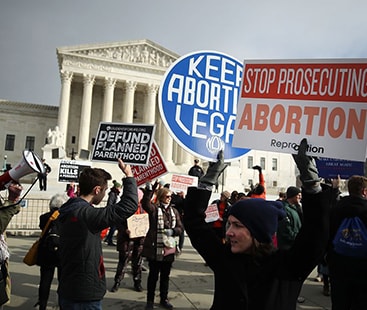 According to sources, The Alabama Senate approved a measure on Tuesday that would outlaw almost all abortions in the state, setting up a direct challenge to Roe v. Wade, the case that recognized a woman’s constitutional right to end a pregnancy.

The strictest-in-the-nation abortion ban allows an exception only when the woman’s health is at serious risk, and sets up a legal battle that supporters hope will lead to the supreme court overturning its landmark ruling that legalized abortion nationwide.

The measure contains no exception for rape and incest, after lawmakers voted down an amendment Tuesday that would have added such an exception.

The legislation, which passed by a vote of 25-6, makes it a class A felony for a doctor to perform an abortion, punishable by 10 to 99 years in prison. Women would not face criminal penalties for getting an abortion.

Mr. Johnston, who drafted the Alabama bill and sees himself as a purist on the abortion issue, said he did not support the spate of restrictive legislation that other states have enacted in recent months, including so-called fetal heartbeat bills. These bills essentially ban abortions starting at six weeks after conception, a time when many women do not yet know they are pregnant.

Given the current leanings of the Supreme Court, Mr. Johnston said, making such a measure, which does not directly challenge Roe, the subject of the court’s next major abortion case would be a wasted opportunity.

The Senate gallery was full before the debate started on Tuesday afternoon. A long line of people waited to take seats when people left. Many in the audience were abortion rights activists, and at times they laughed when male lawmakers spoke about pregnancy and other female health issues.