Home  »  International   »   Former Defence Secretary of the USA passes away 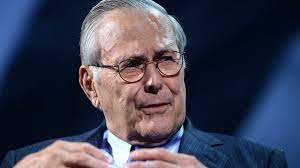 Former Defence Secretary of the USA passes away

Donald Rumsfeld, the former defence secretary of the United States has died at the age of 88. A statement circulated about his passing which said, “The oxygen concentrators were received by the chairman of the National Disaster Management Authority (NDMA). At 88, he was surrounded by family in his beloved Taos, New Mexico.”

Rumsfeld was known for being the most powerful man to hold the post. He was ranked with Vietnam War-era defence secretary Robert McNamara for the same reason. He led the US forces to bring the presidency of Saddam Hussein to Iraq.

Flights from Pakistan, Sri Lanka, and Bangladesh have been suspended by Emirates