Golan Heights: why Trump now recognized Israel's sovereignty over these territories and what is their importance - Rava
Recent View all
Reviews
Read more

Home  »  International   »   Golan Heights: why Trump now recognized Israel’s sovereignty over these territories and what is their importance 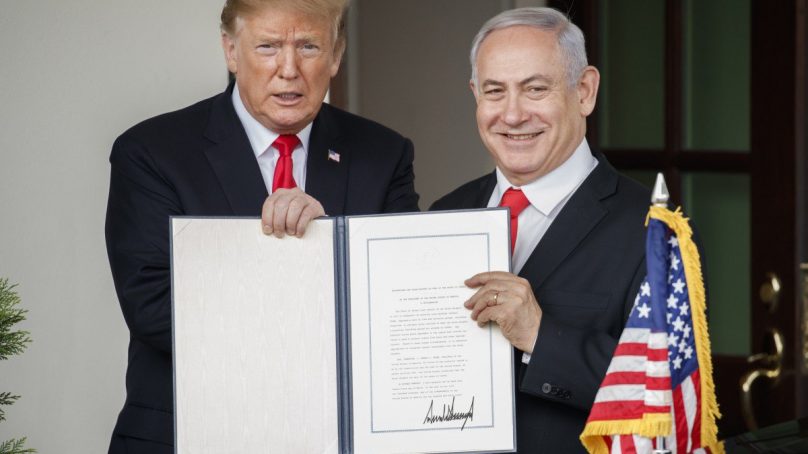 Trump’s decision to back Israel’s sovereignty over the Golan Heights was described as “historic” by Prime Minister Benjamin Netayanhu, at the same time unleashing a torrent of criticism and even serious warnings from other countries.

And is that the measure of the US president was a momentous change in terms of the foreign policy of the world’s leading power.

For decades, the United States and most of the world rejected Israel’s occupation of the Golan Heights, snatched from Syria in the 1967 Arab-Israeli war.

“To paraphrase the principle embodied in the Charter of the United Nations: you can not keep the land you take, you must negotiate your destiny, Trump has altered that, ” says BBC journalist Barbara Plett, a specialist in US foreign policy.

Trump made his intentions clear last week, when he considered that it was time for “the United States to fully recognize Israel’s sovereignty over the Golan Heights, which are of strategic importance and critical security for the State of Israel and the regional stability “.

On Monday, he signed the statement that sealed that commitment and Netanyahu thanked him for the gesture from the White House, where he was visiting, insisting that “Israel got the Golan Heights in a just war of self-defense.”

However, there are few signs that other countries follow Washington’s footsteps. 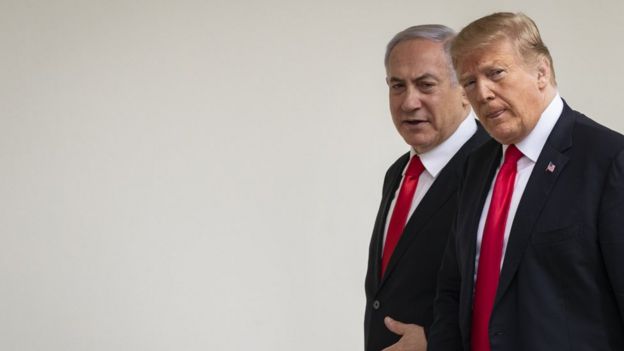 Image caption Trump’s decision on the Golan Heights radically changed the US position on the issue.

Syria described what happened as a ” slap ” to the international community and warned that it was willing to recover the area “by all available means”; Russia – which has supported Syrian President Bashar al-Assad militarily in the civil war – warned that the decision could trigger ” a new wave of tensions ” in the Middle East; and Turkey, which has been supporting the Syrian opposition, considered “impossible” to accept Trump’s position and announced that it plans to fight that position in the UN.

“The status of the Golan Heights has not changed,” said a spokesman for Antonio Guterres, the secretary general of the UN.

But, what is the importance of these territories and why did Trump decide to change the position of the White House now?

What are the Golan Heights?

It is a rocky plateau about 60 kilometers southwest of the capital of Syria, Damascus, and with an area of ​​about 1,200 square kilometers.

Israel wrested most of these territories from Syria in the last stages of the 1967 Six-Day War and repulsed a Syrian attempt to recover the region during the 1973 conflict.

The two countries signed an armistice agreement a year later, which focused mainly on the declaration of an area of ​​separation, a demilitarized zone of 70 kilometers between the territories controlled by both countries and patrolled by UN forces, as observers.

However, both countries remained technically at war.

In 1981, the Israeli Parliament passed legislation that applied the Israeli “law, jurisdiction and administration” to the Golan, a step equivalent to annexation.

The international community did not recognize it and maintained that the Golan Heights were occupied Syrian territory.

It is estimated that there are more than 30 Jewish settlements in this area, in which some 20,000 people live. They coexist along with another 20,000 Syrians, most of them Druze Arabs, who did not flee when the Golan Heights were annexed.

Why are they so important?

The Golan Heights are of crucial political and strategic importance.

Southern Syria and its capital, Damascus, are visible from the highest points of the Golan.

From there, for example, Syria used artillery against the northern part of Israel during 1948 to 1967, when the area still controlled the area. 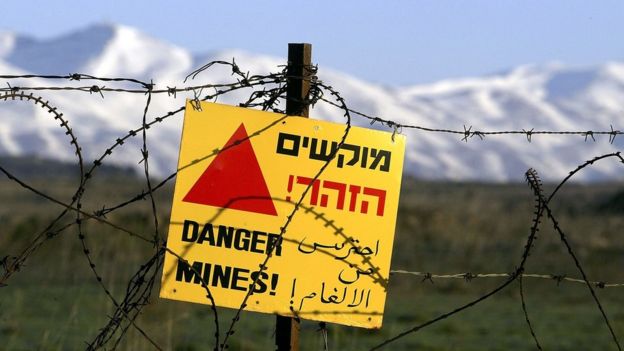 Image caption When they were under Syrian control, the Golan Heights were used to bomb Israeli territory.

The area now offers a significant advantage to Israel to control the movements of the Syrians. The topography of the place, moreover, is a natural barrier against any military coup by Syria.

The Golan is also a key source of water for a traditionally arid region. The rainwater that falls in the Golan basin flows into the Jordan River and the area is the source of a third of Israel’s water supply .

The land is fertile and the volcanic soil is used for viticulture and arboriculture, as well as for raising livestock.

Among other things, the Golan is also the only place where Israel has a ski resort.

Is there a possibility that Israel will return those territories?

Syria wants the return of the Golan Heights to be guaranteed as part of any peace agreement.

At the end of 2003, Syrian President A l Asad said he was prepared to resume peace talks with Israel.

During the talks, which had US mediation between 1999 and 2000, the then Prime Minister of Israel, Ehud Barak, offered to return most of the area to Syria. 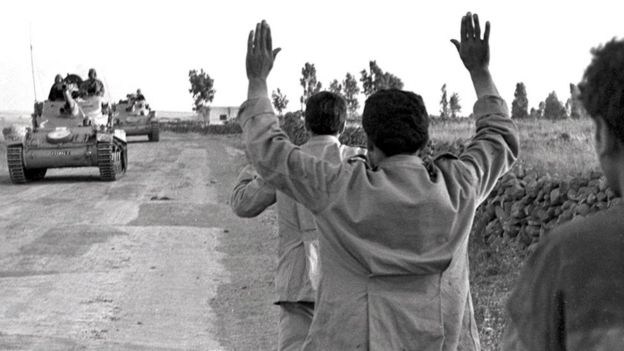 Image caption Israel took control of the Golan Heights in 1967

But the main stumbling block of the 1999 negotiations is likely to overshadow any future dialogue.

Syria wants a complete withdrawal from Israel to return to the pre-1967 border , which would give Damascus control of the east coast of the Sea of ​​Galilee, Israel’s main source of fresh water.

Israel and Syria resumed dialogue indirectly in 2008, through intermediaries of the Turkish government, but these talks were again suspended after the resignation of Israeli Prime Minister Ehud Olmert for an investigation into corruption.

When Benjamin Netanyahu was elected in February 2009, he already indicated that he was willing to tighten his position on the Golan and a few months later Syria said he had no partner to negotiate with on the Israeli side.

Image caption UN blue helmets have patrolled the Golan Heights since 1974, to “monitor” the ceasefire between Syria and Israel.

The government of Barack Obama announced that the reactivation of the dialogue between Israel and Syria was one of its main objectives in foreign policy, but the outbreak of the civil war in Syria in 2011 put an end to any progress in this regard.

Why did Trump decide to change the position of the United States on this matter?

Analysis of Barbara Plett, a BBC journalist specializing in US foreign policy

The idea of ​​the United States recognizing Israel’s sovereignty in the occupied territories of the Golan Heights has long been evaluated by the Trump executive and has been driven more intensely by Israeli officials in recent months.

Trump said he made the decision for security and strategic reasons, referring to Iran.

His government is convinced that Iran is using Syria as a base to target Israel, and the Golan Heights are the first line.

Image caption Netanyahu considered the support of the United States a “historic” decision.

This is a strong argument for the White House and some members of Congress, and one promoted with strong impetus by the Israelis.

But the formal recognition of Israel’s sovereignty over the Golan Heights does not change anything on the ground : Israel already acts with full military authority there.

Therefore, many observers and analysts in both Israel and Washington consider that the president made the announcement now to give a boost to Netanyahu in the April elections, which are expected to be fought.

If so, these sources argue that it is a decision that violates important principles of international law: Trump has just endorsed the seizure of a territory and will have no moral authority to criticize Russia for doing the same in Crimea.