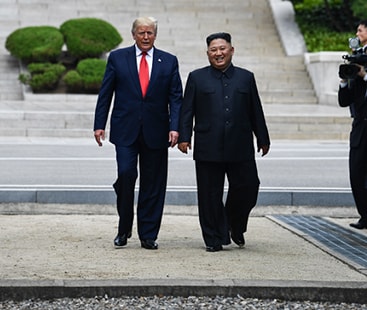 Donald Trump stepped onto North Korean soil on Sunday as he met Pyongyang’s leader Kim Jong Un in the Demilitarised Zone dividing the peninsula, in a symbolic diplomatic spectacle and a first for any American president.

After shaking hands with Kim over the line that marks where their two countries and their allies fought each other to a standstill in the 1950-53 Korean War, Trump walked for several steps into North Korean territory, before another handshake.

The two men then walked into Seoul’s territory together pausing on the line for photographers where they were joined by South Korean President Moon Jae-in.

The impromptu meeting in the DMZ which came after Trump issued an invitation on Twitter on Saturdaycomes with negotiations between Pyongyang and Washington over the North’s nuclear arsenal at a deadlock.

Their first summit took place in a blaze of publicity in Singapore last year but produced a vaguely-worded pledge about denuclearisation, and a second meeting in Vietnam in February intended to put flesh on those bones broke up without agreement.

Contact between the two sides has since been minimal  with Pyongyang issuing frequent criticisms of the US position but the two leaders have exchanged a series of letters and Trump turned to Twitter on Saturday to issue his offer.

“If Chairman Kim of North Korea sees this, I would meet him at the Border/DMZ just to shake his hand and say Hello(?)!,” he wrote from from Osaka in Japan, where he was attending a G20 summit before flying to Seoul.

After some very important meetings, including my meeting with President Xi of China, I will be leaving Japan for South Korea (with President Moon). While there, if Chairman Kim of North Korea sees this, I would meet him at the Border/DMZ just to shake his hand and say Hello(?)!